Accessibility links
The Man Behind The 'Tonight' Controversy The upending of the late night schedule at NBC can be laid at the feet of NBC head Jeff Zucker. By moving Jay Leno to prime time, Zucker disturbed the ecosystem of viewing habits and created a downward slide of ratings leading into local news and the rest of the late-night schedule. One affiliate station revolt later, NBC has reversed itself while America watches.

Listen
The Man Behind The 'Tonight' Controversy 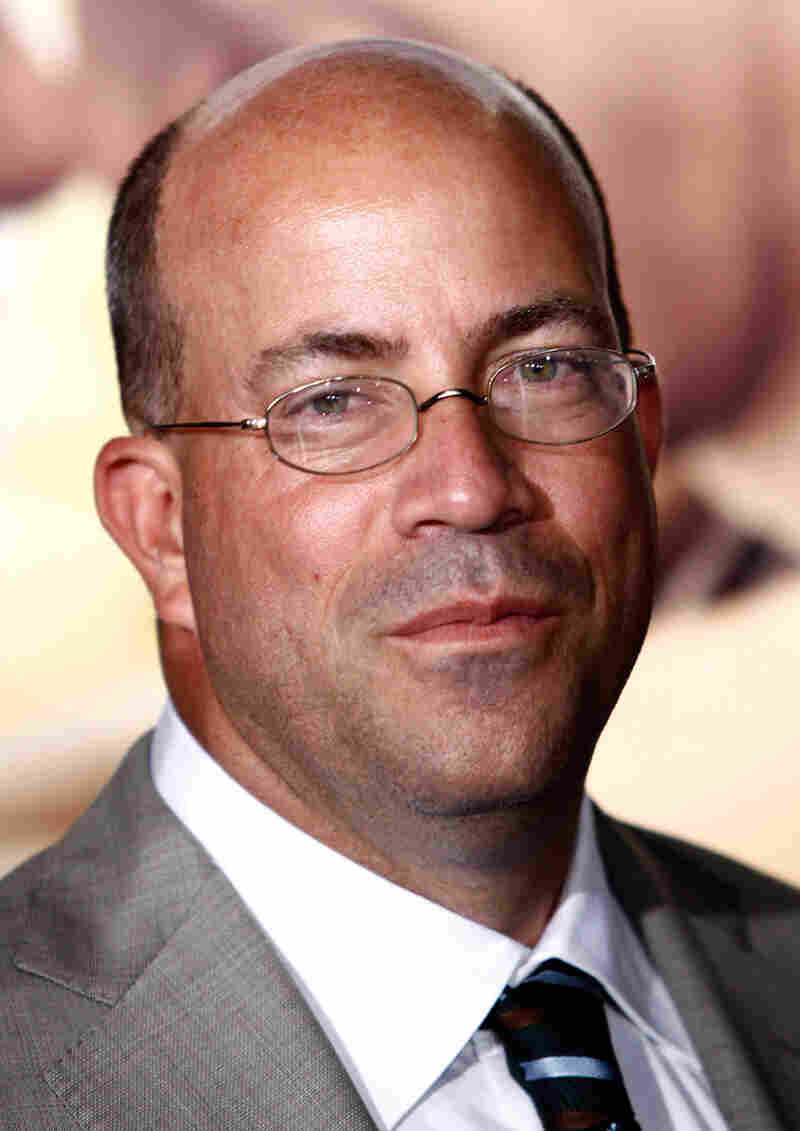 Jeff Zucker's rise at NBC over more than two decades has been meteoric. He is credited with turning the Today Show into a profit behemoth and NBC News into a consistent ratings leader.

Zucker landed atop NBC Entertainment and, more recently, became president of the entire network. But with NBC's last-place ratings in prime time and an open brawl among its top late-night comics, Zucker's record is getting a harsh rewrite.

"There's really no way he can disclaim it," says James Poniewozik, the television and popular culture critic for Time magazine. "He's been running the network in one capacity or another for about the past 10 years. You know, it had come off a decade of dominance — of greatness in the '90s, and now it is in shreds."

The network had plummeted from last to first in prime time, as it failed to find broad-gauged dramatic hits and failed to stick with several shows, like police drama Southland, that showed some promise. Last year, however, change came to NBC's late-night comedy lineup — long a cultural touchstone and profit center for the network.

Zucker had promised Conan O'Brien of NBC's Late Night in 2004 that he could take over the Tonight Show last year. But Jay Leno's ratings on the Tonight Show were still strong. Zucker wanted both in the fold: O'Brien for the future and Leno for now.

Thus Zucker created The Jay Leno Show, an hourlong daily variety show at 10 p.m. It would at once keep Leno from decamping and competing with O'Brien, and dispense with expensive hourlong scripted dramas that had been a hallmark of NBC's "Must-See TV" lineup.

"What they did at the 10 o'clock time period was pretty much rolling the dice. It was all or nothing," says analyst Larry Gerbrandt of Media Valuation Parners. "Either all five nights worked, or they didn't."

The gamble failed. Both comics suffered from diminished ratings and the shows were seen in competition for much the same audience. And the ratings plunge also angered the executives at local NBC stations, which rely on the draw of the network's 10 p.m. shows to retain viewers for their lucrative late-night newscasts.

Now, in a complete reversal of programming decisions Zucker made only a few months ago, Leno is being taken out of that 10 p.m. hour and shoehorned back into his familiar 11:30 time. And that has unleashed an outcry by O'Brien's fans, as well as a public clash on the network's own airwaves.

O'Brien told his audience he refused to move his own show back to a start after midnight — and joked that he was trying to sell a "barely used late-night talk show" on Craigslist. Senior NBC executive Dick Ebersol shot back, calling O'Brien "gutless" in an interview published in Friday's editions of The New York Times.

Leno got in his own crack Thursday night:

"As you know, with all of the controversy going on here at NBC, actually, The Tonight Show with Conan O'Brien's ratings have gone up," Leno said, then added, as if to his rival: "So — you're welcome!"

Little more than a month ago, GE announced it would be selling the controlling stake in the network's parent company, NBC Universal, to the cable giant Comcast. Zucker is the CEO of NBC Universal and Comcast announced he would stay on in that role. Poniewozik of Time says Zucker is managing for the short term in picking Leno over O'Brien.

"Jay, they figure, will pull a better rating right now," Poniewozik says. "I think that NBC is in such a bad situation — and so badly wants to turn things around and make things look good for the Comcast acquisition and all that — that they just do not feel that they have the luxury of long-term thinking."

Zucker's strategic vision was that broadcast television was a fool's errand — that the Internet, cable TV and other diversions had made conventional commercial television untenable for the big networks.

"I would say in Zucker's defense that he's gotten it right about some of the big-picture things, about what are the problems of broadcast TV today," Poniewozik says. "I think that NBC came up with what turned out to be exactly the wrong solutions to those problems."

Lawyers for NBC and O'Brien are trying to work out the terms of his departure. Poniewozik says Zucker's lasting legacy may be to have damaged the brand of NBC and the aura that surrounded the Tonight Show.