Accessibility links
'No End In Sight' Charles Ferguson's meticulously assembled documentary will raise your hackles — either at the folks who've been prosecuting the Iraq war, or at Ferguson, whose clear aim is to hold their feet to the fire.

'No End In Sight'

'No End In Sight' 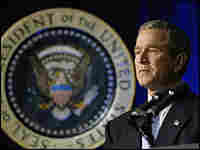 If you're not already angry about the war in Iraq, this meticulously assembled documentary will almost certainly raise your hackles — either at the folks who've been prosecuting the war, or at director Charles Ferguson, whose clear aim is to hold their feet to the fire.

He does so with a quick summary of 2006 news reports about chaos and death on the ground in Iraq, then goes back to the origins of America's Iraq policy in the 1980s. Interviewing figures from inside a number of different administrations, most of whom talk about escalating miscalculations, he paints a portrait of unprofessionalism, incompetence, and devastating errors in judgment. His most damning witnesses served on the Bush team, including former Deputy Secretary of State Richard L. Armitage. There's nothing new about the case Ferguson makes, but it's rarely been made with such devastating force.

'No End In Sight:' Official Site