Accessibility links
Stories Of Women On The Outside Looking In The heroines in the early stories of author Mavis Gallant deal with a reality Gallant herself knew — the freedom, and loneliness, of expatriate life. Those stories have been collected in a new book called The Cost of Living.

Stories Of Women On The Outside Looking In

Stories Of Women On The Outside Looking In 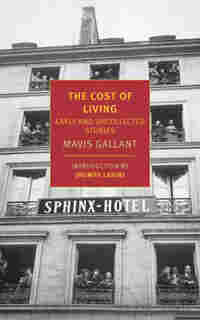 There are women in the world with perfect exteriors — their hair done just so, their manicures never chipped, their voices soft and silky and never saying the wrong thing. These are not the women who populate Mavis Gallant's short stories. As she writes in the titular "The Cost of Living": "Think of draggled laces, sagging hems, ribbons undone." Gallant's heroines are the awkward, the hopeless, the immature, the ones on the outside of womanhood looking in.

Gallant knows a thing or two about displacement. After a brief marriage, she left her native Canada for Paris in 1950 and has remained there ever since. Many of the portraits in The Cost of Living: Early and Uncollected Stories capture girls and women out of their element. Gallant's heroines know that expatriation may bring a feeling of liberation, but also a gnawing loneliness and disorientation. The two Australian sisters in the title story live in France, a country so foreign to them that even the sun — that "cold red sun" hanging briefly in the sky "like a malediction" — seems unfamiliar.

In the stellar "Autumn Day," the young Cecilia follows her military husband to Salzburg and finds herself lagging behind him in adapting to the new world. He has friends already in place, and she is shocked to discover he's acquainted with the language. "I didn't know until that minute that he read German. ... It wasn't important after all, you don't say to your wife, 'Hey, I read German.' " Having lost her bearings and realizing she barely knows her own husband, Cecilia pins all of her hopes on the possibility of befriending the woman upstairs, who she cannot see but can hear singing. She imagines her as glamorous and perfect, a friend who will better her simply by association.

A frequent contributor to the New Yorker, Gallant has, over a long career, deftly documented women on the boundaries between childhood and adulthood, between their native home and their adopted home. As such, it's fitting that the stories in The Cost of Living are mostly strays and tales left out of the 1996 volume The Collected Stories of Mavis Gallant, including her first-ever published piece, "Madeline's Birthday" from 1951. It's about time they've been brought in from the cold and seated snugly on your bedroom nightstand.

Excerpt: 'The Cost of Living'

The morning of Madeline Farr's seventeenth birthday, Mrs. Tracy awoke remembering that she had forgotten to order a cake. It was doubtful if this would matter to Madeline, who would probably make a point of not caring. But it does matter to me, Mrs. Tracy thought. Observances are important and it is, after all, my house.

She did not spring up at once but lay in a wash of morning sunlight, surveying her tanned arms, stretched overhead, while her mind opened doors and went from room to room of the eighteenth-century Connecticut farmhouse. She knew exactly how the curtains blew into Madeline's room, which had once been hers, and why there was silence on one floor and sound on the other. It was a house, she told herself, in which she had never known an unhappy moment.

"I cannot cope with it here," Madeline had written to her father shortly after she arrived. "One at a time would be all right but not all the Tracys and this German." "Cope" was a word Madeline had learned from her mother, who had divorced Madeline's father because she could not cope with him, and then had fled to Europe because she could not cope with the idea of his remarriage. "Can you take Madeline for the summer?" she had written to Anna Tracy, who was a girlhood friend. "You are so much better able to cope."

In the kitchen, directly beneath Mrs. Tracy's bedroom, Doris, who came in every day from the village, had turned on the radio. "McIntoshes were lively yesterday," the announcer said, "but Roman Beauties were quiet." Propelled out of the house to the orchard by this statement, Mrs. Tracy brought herself back to hear Doris's deliberate tread across the kitchen. She heard the refrigerator door slam and then, together with a sharp bite of static, the whir of the electric mixer. That would be Madeline's cake, which must, after all, have been mentioned. Or else Doris, her imagination uncommonly fired, had decided to make waffles for breakfast. The cake was more probable. Satisfied, Mrs. Tracy turned her thoughts to the upper floor.

She skimmed quickly over her husband's bed, which was firmly made up with a starched coverlet across the pillow. Edward spent only weekends in the country. She did not dwell on his life in town five days of the week. When he spoke of what he did, it sounded dull, a melange of dust and air-conditioning, a heatstricken party somewhere, and So-and-So, who had called and wanted to have lunch and been put off.

In the next room, Allie Tracy, who was nearly six, stirred and murmured in her bed. In less than a minute, she would be wide awake, paddling across the hall to the bathroom she shared with her mother. She would run water on her washcloth and flick her toothbrush under the faucet. She would pick up yesterday's overalls, which Mrs. Tracy had forgotten to put in the laundry, and pull them on, muttering fretfully at the buttons. Hairbrush in hand, Allie would then begin her morning chant: "Isn't anybody going to do my hair? If nobody does it, I want it cut off. I'm the only one at the beach who still has braids."

Thinking of the overalls, Mrs. Tracy rose, put on her dressing gown and slippers, and went out into the hall, where she met Allie trotting to the bathroom. "Madeline might do your hair," Mrs. Tracy said. "And don't forget to wish her a happy birthday. Birthdays are important." "I hope she's in a good mood," Allie said.

Had Edward Tracy been there, the day could not have been started with such verbal economy. "How's my girl?" he would have asked Allie, even though it was plain she was quite well. "Sleep well?" he would have asked of his wife, requiring an answer in spite of the fact that he slept in the next bed and would certainly know if she had been ill or seized with a nightmare. Allie and Mrs. Tracy were fond of him, but his absence was sometimes a relief. It delivered them from "good morning"s and marking time in a number of similar fashions.

Through the two open doors came the morning sun and a wind that rattled the pictures in the hall. Near the staircase was another pair of doors, both of them firmly shut, and from this Mrs. Tracy inferred that half the household still slept. She found it depressing. The hall seemed weighted at one end — like a rowboat, she thought.

Actually, the German boy, Paul Lange, who was also a guest for the summer, was not asleep behind the closed door of his room but fully dressed and listening to Mrs. Tracy and Allie. His shyness, which Mrs. Tracy had stopped trying to understand, would not allow him to emerge as long as there was movement in the upper hall. Also, he slept with his shades drawn, even though there were no neighbors on his side of the house.

"It shuts out the air. Who on earth are you hiding from?" Mrs. Tracy had once asked him. At this, the poor boy had drawn up his brows and looked so distressed that she had added, "Of course, it's your own affair. But I always thought Germans were terribly healthy and went in for fresh air." Thus did she frequently and unconsciously remind him of his origin, although part of her purpose in inviting him to spend the summer had been to help him forget it.

Mrs. Tracy's connection with Paul was remote, dating back to a prewar friendship in Munich with one of his cousins, a maiden lady now living in New York. Paul had been half orphaned in the war, and when his mother died, a few years later, his cousin had adopted him as a means of getting him to America. Impulsively, and with mixed motives of kindness and curiosity, Mrs. Tracy had offered to take him for the summer. His cousin had a small apartment and was beginning to regret having to share it with a grown boy.

Paul had disappointed Mrs. Tracy. He never spoke of the war, which must surely have affected his childhood, and he had none of the characteristics Mrs. Tracy would have accepted as German. He was not fair; he was dark and wore glasses. He could not swim. He was anything but arrogant. He disliked the sun. He spent as much time as he could in his room, and his waking life was centered around a university extension course.

Paul might just as well have stayed in town, for all the pleasure he gets from the country, Mrs. Tracy thought for the fiftieth time. Passing the last door, on her way downstairs, she heard a dull banging in Madeline's room that was probably a hinged window swinging in the wind.

Madeline awoke at that instant and was unable to place the banging sound or determine where she was. The days of her lifetime had been spent in so many different places — in schools, in camps, in the houses of people she was or was not related to — that the first sight of day was, almost by habit, bewildering. Opening her eyes, she recognized the room and knew that she was spending the summer in the country with the Tracys.

Reaching out of bed, she slammed the window. The room was suddenly quiet, and through the hot-air register she could hear Mrs. Tracy downstairs, asking Doris if she had ever seen such a perfect morning. Doris's answer was lost in the whir of the electric mixer.

Every day of summer, so far, had been launched on a wave of Mrs. Tracy's good will and optimism. Madeline settled back in bed and closed her eyes. Seven more days to Labor Day, she thought, and only then did she remember that it was her birthday. Three years ago, she had been fourteen. In another three, she would be twenty. She was unmarried and not in love and without a trace of talent in any direction. It seemed to her the worst of all possible days. 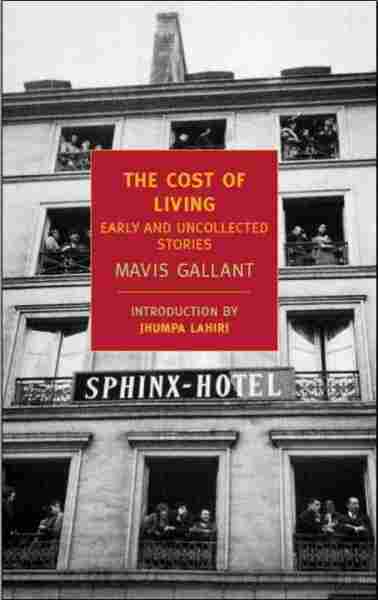 The Cost of Living

by Mavis Gallant and Jhumpa Lahiri