Accessibility links
Methane Causes Vicious Cycle In Global Warming Carbon dioxide usually gets most of the blame for global warming, but a dramatic increase in methane gas emissions is worrying scientists. Global warming is causing the world's wetlands to produce more methane gas — which in turn is causing more global warming. 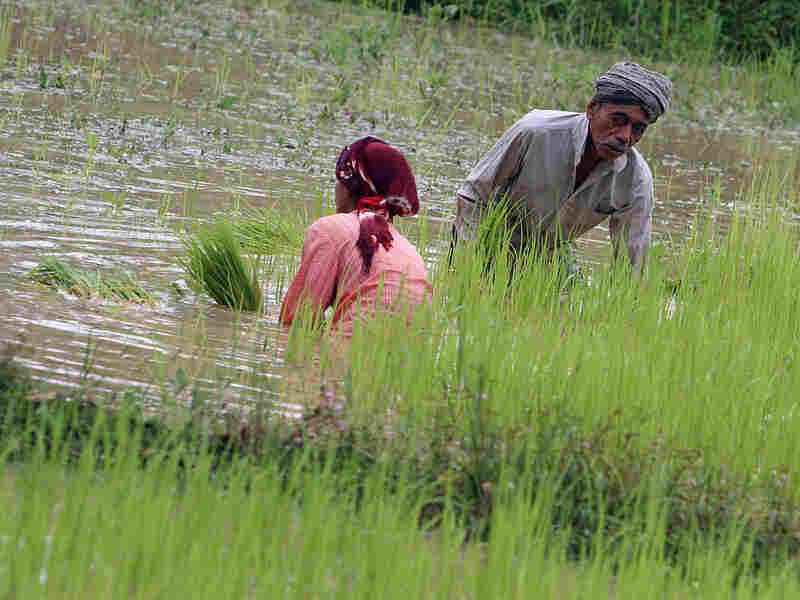 Farmers in Thailand tend to a rice paddy in Yala province. Rice paddies are one of the main sources of methane emissions worldwide. Muhammad Sabri/AFP/Getty Images hide caption 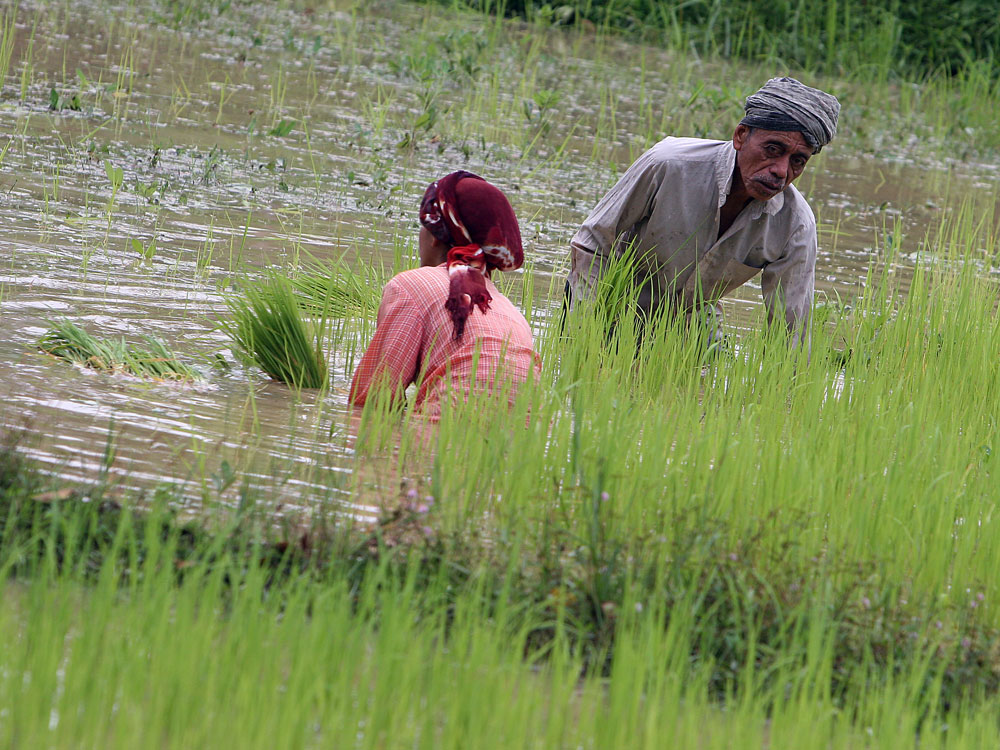 Farmers in Thailand tend to a rice paddy in Yala province. Rice paddies are one of the main sources of methane emissions worldwide.

Carbon dioxide is the gas we most associate with global warming, but methane gas also plays an important role. For reasons that are not well understood, methane gas stopped increasing in the atmosphere in the 1990s. But now it appears to be once again on the rise. Scientists are trying to understand why — and what to do about it.

Methane gas comes from all sorts of sources including wetlands, rice paddies, cow tummies, coal mines, garbage dumps and even termites. Drew Shindell, at NASA's Goddard Institute in New York, says, "It's gone up by 150 percent since the pre-industrial period. So that's an enormous increase. CO2, by contrast, has gone up by something like 30 percent."

Molecule for molecule, methane is much more effective than carbon dioxide at trapping heat in the atmosphere. And that's just part of the trouble.

"Methane is much more complicated once it gets into the atmosphere than something like carbon dioxide is," Shindell says, "and that's because it reacts with a lot of different important chemicals."

Bad For Climate And Health

For example, methane in the atmosphere also creates ground-level ozone. And ozone isn't only bad for human health; it also contributes to global warming. Shindell recently totaled up all the effects of methane emissions and realized that the heating effect is more than 60 percent that of carbon dioxide's.

"So that tells you that methane is a pretty big player."

Methane in the atmosphere leveled off in the 1990s, so it seemed that efforts to control industrial emissions were keeping this problem gas in check. But since 2007, methane levels have been on the rise again.

A study published last week in Science magazine suggests that at least part of this increase is coming from the vast wetlands in Canada, Russia and the Arctic. The methane in wetlands comes from naturally occurring bacteria. But study author Paul Palmer at the University of Edinburgh says the bacteria are producing more methane because the temperature is rising.

"The higher the temperature, the more efficient they are at producing methane," he says. So global warming is causing these wetlands to produce more methane. And the methane is causing more global warming.

"This really does demonstrate the fact that we are having this vicious cycle in the climate system. And we're seeing it now."

It's not yet to the stage where it's a runaway warming effect, Palmer says. But climate scientists are worried that we could hit that tipping point.

There's no obvious way to control methane from natural wetlands other than to keep them from overheating. But at least half of methane emissions are from human activities, ranging from cattle-rearing and natural gas exploration to coal mining.

Since methane is the main ingredient of natural gas, efforts to capture it can actually pay for themselves. You use the gas for energy. And Shindell says there are other benefits of controlling methane. Methane contributes to ozone, which costs society real money because of its human health effects, and ozone also damages crops.

"So if you account for all the economics, all the gains that you get through the benefits of controlling methane that aren't even related to climate, you find that many of the reductions you could make actually pay for themselves," Shindell says.

Even so, there's relatively little effort now to control methane. Mohamed El-Ashry at the United Nations Foundation says part of the reason has been a fear by governments and advocates that attacking methane would be a dangerous distraction.

"People are worried about diverting attention away from carbon dioxide," he says. "But that shouldn't really be the case at all."

Both problems need to be solved sooner or later. But global methane projects practically ground to a halt last year.

El-Ashry is part of a group advocating for a new $200 million fund to help jump-start these methane programs again.

"Here is an opportunity to have an immediate effect in terms of impacts, particularly on the Arctic, and secondary impacts, like on health," he says.

And the good thing about methane is that it stays in the air for only about a decade, so if you can reduce emissions, you can see quick results.