Accessibility links
Devastation Lies Beyond Haiti's Capital In the Haitian city of Leogane, an estimated 80 percent of the structures collapsed in the earthquake. By the time the first responders arrived over the weekend, they failed to rescue anyone from the rubble. 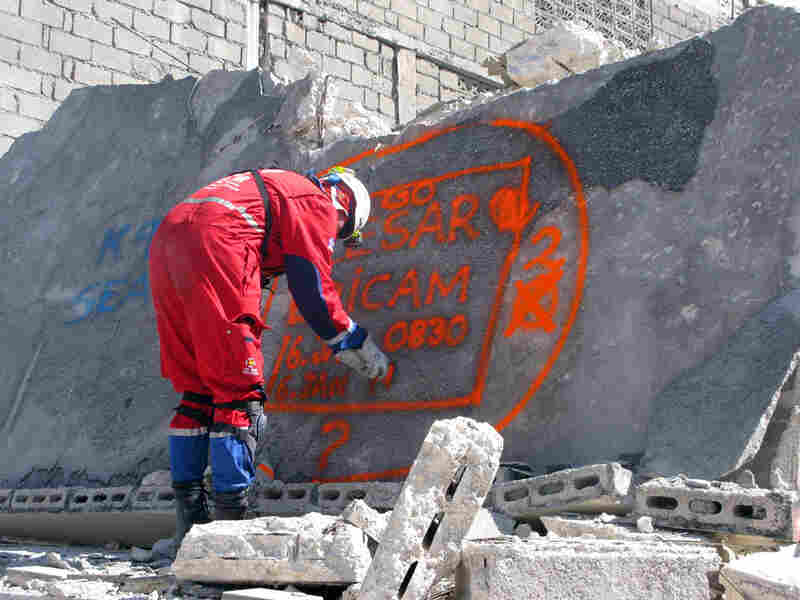 A member of the Icelandic search and rescue team spray-paints a wall in Leogane, signaling that a collapsed building has been searched, without any survivors located. Jackie Northam/NPR hide caption 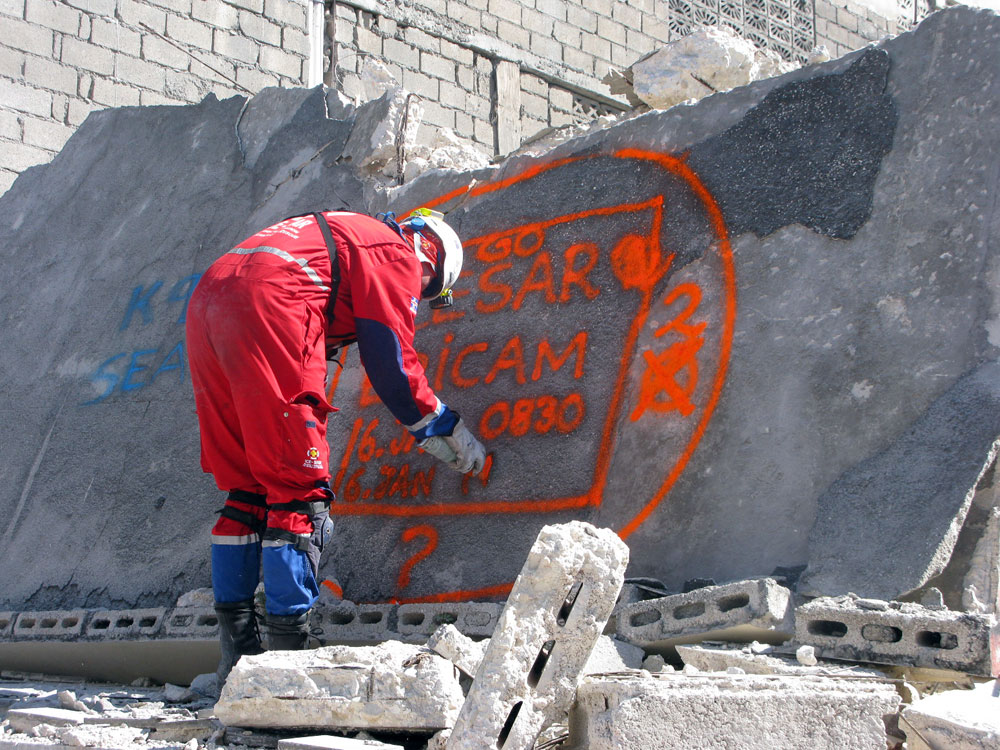 A member of the Icelandic search and rescue team spray-paints a wall in Leogane, signaling that a collapsed building has been searched, without any survivors located.

The closer you get to Leogane, the greater the devastation. The city of 160,000 is very near the epicenter of Haiti's earthquake. Driving into the city, it seems every house — every building — is either collapsed or is teetering at a dangerous angle. The survivors stand in groups and gaze at the destruction. The parks in Leogane are starting to fill with makeshift tents.

Members of a joint British and Icelandic search-and-rescue team quickly set up a command center in the middle of an empty field.

They are part of the first search-and-rescue team to arrive in Leogane, five days after the quake struck. A reconnaissance team estimated that 80 percent of the city was destroyed. The team must quickly get the lay of the land — the maps don't include many of the smaller streets — and searchers need to prioritize what buildings to go to first. They rely on the local people for information.

They're told there are a couple of dead bodies at a school. Key questions follow: When was the last time anyone heard from someone inside the building?

No sound, no survivor.

"If you're looking for survivor, I don't think you're gonna find a survivor around here," he says. "I don't really think so, they're all dead. You guys are here, but I think you're ... I don't know, I think you're a little bit late."

But at another nearby school, there is a whisper of hope. Forty to 50 children were in the school when its roof collapsed. Up to a dozen were pulled out alive several days ago. But there could be an air pocket. The kids might not have food or water, but some could still be alive.

Members of the Icelandic search-and-rescue team walk over the roof — now at ground level — and set up sensitive listening devices. Then ask a local man to yell out to the children through a large hole in the roof.

The listening devices are so sensitive, they can pick up the sound of faint scratching ... if it's quiet. That's difficult in this area, so someone shouts for others to be silent.

The rescue workers still can't make out if anyone is still alive. But with up to 35 children under the rubble, they're not stopping.

Jackhammers pound large holes into the roof and then cameras are inserted.

It's a long process. The locals watch intently — and stay out of the way.

Among them, crying quietly, is an aunt of one of the children under the roof, a 10-year-old named Brittany. Brittany's aunt watches as the rescue workers bring in a search dog, but the dog shows no sign it has detected a living being under the rubble.

So a notice is spray-painted on a wall outside the former school, saying the building was searched — and that no survivors were found.

The Icelandic and British rescue team was due to search Leogane for up to three days, but it pulls out after the first. It's clear the team is too late to pull any survivors from the rubble here. And the team is needed elsewhere.