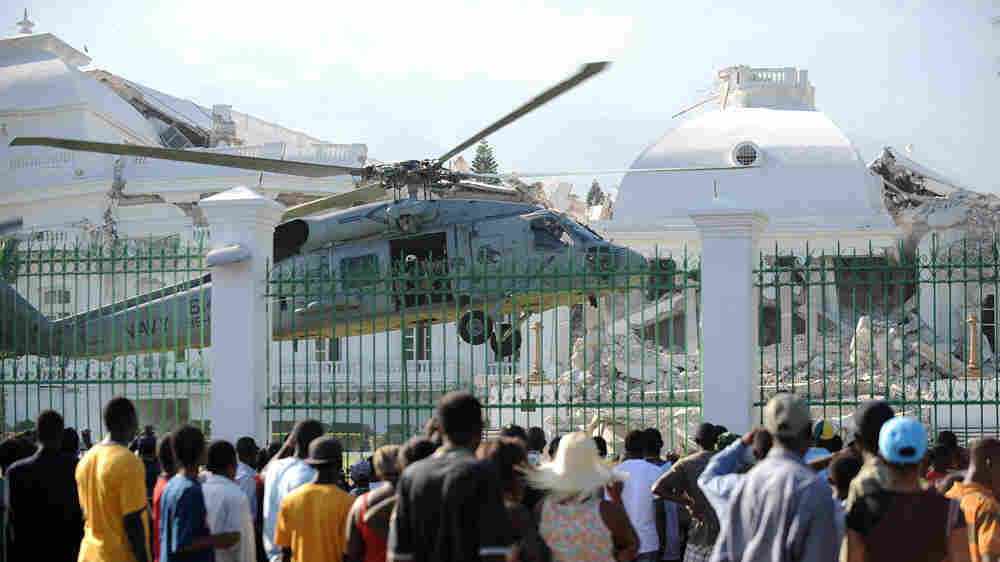 Dozens of U.S. troops landed by helicopter at Haiti's ruined presidential palace Tuesday to help with security and expand the flow of aid in the Caribbean nation. Their arrival, part of an influx of thousands of U.S. military personnel expected this week, comes as desperate earthquake survivors increasingly turn to looting amid the devastation and as officials say the death toll could reach 200,000.

Hundreds of Haitians gathered outside the wrought-iron gates at the palace in the capital, Port-au-Prince — some to cheer, others simply to gawk — while the U.S. Navy copters landed and soldiers from the Army's 82nd Airborne Division took control of the palace. U.S. Marines landed in helicopters west of the city, the first of about 800 expected to go ashore.

NPR's Tom Bowman Reports On Who Should Lead Relief Operations

Haiti Relief Operation: Who Should Be In Charge?

NPR's Carrie Kahn Reports On The State Of Haiti's Government

One week after the tragedy, authorities say 1.5 million residents of Port-au-Prince are displaced, and aid deliveries are only reaching a small portion of the population.

Just four blocks from the U.S. landing at the palace, hundreds of people were looting stores and businesses, foraging for supplies.

"That is how it is. There is nothing we can do," said Haitian police officer Arina Bence, who was trying to keep civilians out of the looting zone for their own safety.

For the first time Tuesday, U.S. soldiers established a presence on street corners near where looting was heaviest, NPR's Jason Beaubien reported.

Darlene Jean told Beaubien that the Americans' arrival gives her hope, saying that without U.S. intervention, "you might as well bury us, because we are already dead."

"The Haitian government can't do anything for us right now," she said.

The security challenges are especially acute for a government that all but collapsed after the Jan. 12 quake. Haitian officials have been operating out of a small police station. Interior Minister Paul Antoine Bien-Aime told NPR's Carrie Kahn that the government is in control and holding meetings to coordinate recovery efforts.

The American forces that arrived Tuesday join 1,700 other U.S. troops already on the ground, providing security for relief organizations in and around the port, according to John Kirby, spokesman for the U.S. military's joint task force in Haiti.

They will escort and ensure distributions of water, food and medical aid. Their rules of engagement bar them from a direct policing role but do allow them to defend themselves and others as necessary.

Photo Gallery: A Lack Of Security

As international agencies slowly make their way into neighborhoods a week after the magnitude-7 temblor struck near the capital, NPR's Jackie Northam reported, small riots have broken out at some distribution points among people becoming more desperate by the hour. Medical teams are running out of critical supplies.

The Scene In Jacmel

Twenty miles south of the capital lies Jacmel, a seaside tourist town with French colonial architecture that dated to the mid 19th century. Most of those buildings are in ruins, NPR's Greg Allen reported.

"The old part of the city is demolished," he said. "But in terms of the devastation we saw, it's nothing compared to what we saw in Port-au-Prince."

Even so, "whole streets are just filled with rubble," Allen said. "It will take an amazing amount of work to get this place back on its feet again."

Canadian forces are taking the lead in providing aid to Jacmel, building on a long relationship with the city, Allen said.

An Influx Of Aid

United Nations humanitarian chief John Holmes acknowledged that not all of the 15 planned U.N. food distribution points are up and running. Still, the agency's World Food Program says aid workers have handed out more than 250,000 daily food rations so far and that it hopes to serve 100 million prepared meals over the next 30 days.

The European Union has agreed to boost its aid pledges for Haiti to $606 million in emergency and long-term aid, on top of at least $100 million promised by the U.S. After meeting with Haitian President Rene Preval and other international representatives, Dominican Republic President Leonel Fernandez said Haiti would need $10 billion over five years.

A combination medical and surgical unit sponsored by the U.S. government was in place at a soccer field where about 2,000 refugees are living in tents and lean-tos. The medical teams overcame many obstacles just to reach Haiti and they were eager to get to work, NPR's Joanne Silberner reported.

The U.S. government has sent 265 medical professionals to Haiti. Paramedic Peter Allen, who doubles as a public information officer, said the teams have so far seen mostly fractures and burns, as well as some abdominal injuries ... and one child birth.

"I think it is going as quickly as it can go, given challenges we're having with our limiting factors of transportation and security," said Andrew Steverner, commander of the incident response coordinating team for the Department of Health and Human Services.

Many the team members — paid volunteers who've left their jobs for two weeks or more — told Silberner off the record that they were very frustrated by all the delays. But they're happy to be finally helping.

Number Of Dead Expected To Double

The European Commission's latest casualty report, citing Haitian government figures, doubled previous estimates of the dead to approximately 200,000, with some 70,000 bodies recovered and trucked off to mass graves. If accurate, that would make Haiti's catastrophe about as deadly as the 2004 Indian Ocean tsunami, which killed an estimated 230,000 people in a dozen countries.

The report also says about 250,000 people were injured in the quake and 1.5 million people were left homeless.

Disease, Dehydration Could Be 'Second Disaster'

At the first U.S. government health clinic in operation, set up Monday near a soccer field in the capital, broken bones and other crush injuries were common, NPR's Joanne Silberner said. Health officials there fear that a lack of clean water will lead to dehydration and the spread of infectious diseases, she said.

"That could be a second disaster," Silberner said, adding that Port-au-Prince's infrastructure, which was lacking even before the quake hit, is now severely burdened.

Reporting from the town of Jimani in neighboring Dominican Republic, NPR's Russell Lewis said the public hospital there has received a constant flow of Haitians who have crossed the border seeking medical assistance. He said some aid is moving the other direction, overland into Haiti, but that bureaucratic red tape has caused a bottleneck as aid organizations work to sort out the shipments.

"I simply don't understand what is taking the foreigners so long," Haitian pharmacist Raymond Saintfort told The Associated Press as he lugged two suitcases of aspirin and antiseptics to the ruins of a nursing home in Port-au-Prince.

The U.S. military says it can now get 100 flights a day through the capital's tiny, one-runway airport, up from 60 last week, but still could use more. On Monday, troops parachuted pallets of supplies to a secured area outside the city rather than further clog the airport.

Military officials said they will begin using two additional airports in the next two days.