Accessibility links
Inmates Who Can't Make Bail Face Stark Options Shadu Green was like hundreds of thousands of inmates nationwide who can't afford bail or a bondsman's fee. So Green, who insists he is not guilty of a series of misdemeanors after getting pulled over for speeding, had to decide whether to fight his case from jail or plead guilty and get out faster. Studies show that internal debate usually works in prosecutors' favor.

Part two in a three-part report 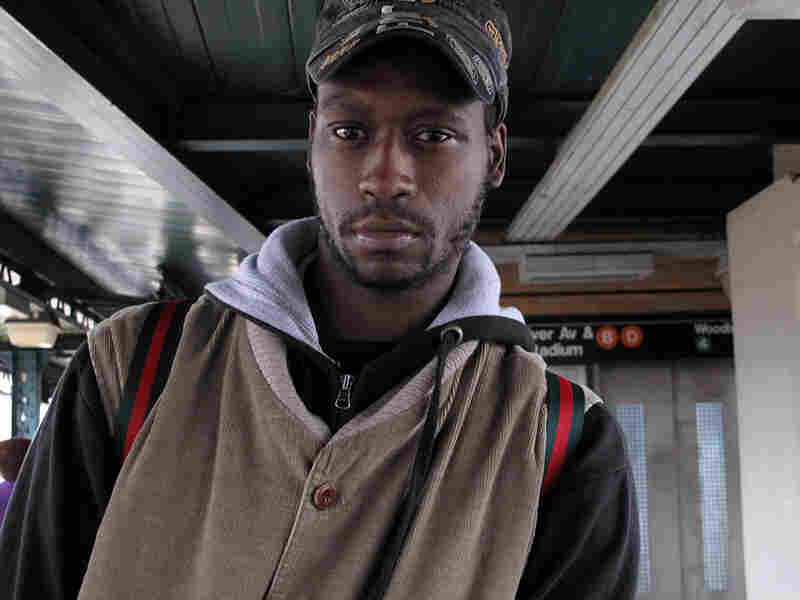 Shadu Green, charged with a series of misdemeanors, did not have the $1,000 the judge set as his bail. Laura Sullivan/NPR hide caption 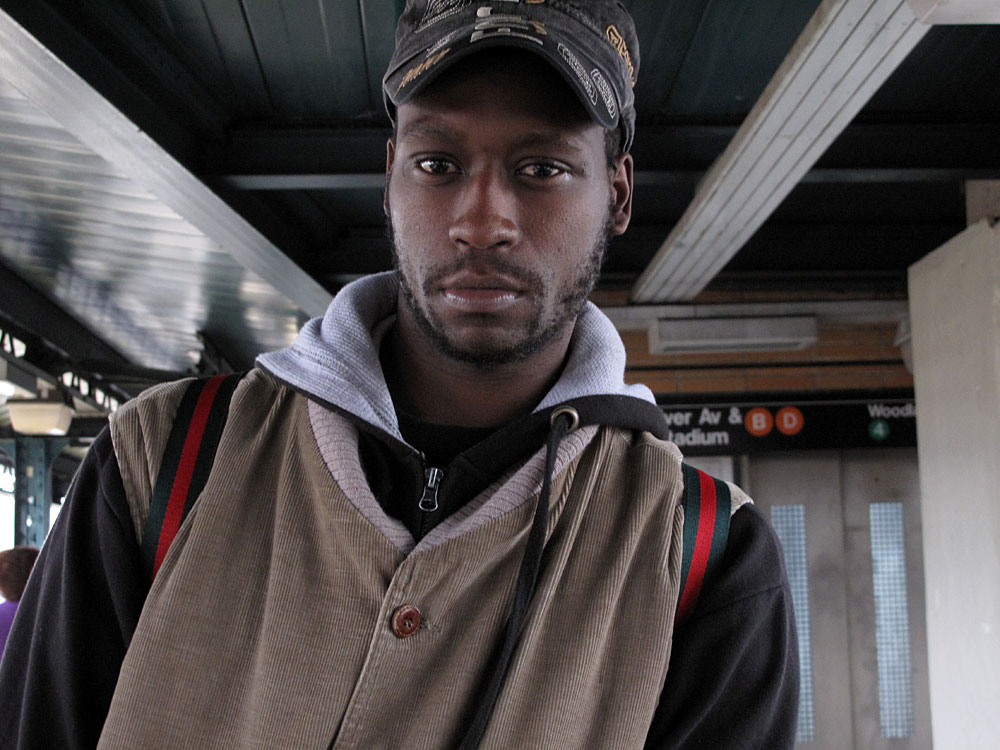 Shadu Green, charged with a series of misdemeanors, did not have the $1,000 the judge set as his bail.

On the East River just across from Rikers Island sits a barge officially called the Vernon C. Bain Center. But every judge, layer and inmate in New York knows it as The Boat — a giant, floating jail docked in the Bronx.

Sometimes when the wind blows, you can feel it list just a little.

It is here that I first meet Shadu Green in June 2009. He is locked in a day room, still wearing the T-shirt and jeans he had on when he was arrested three weeks earlier.

In here, "every day is horrible," he says, leaning against one of the green walls. "I mean, I try not to show emotion because in here, you show emotions and they eat you alive."

Green, 25, is charged with a series of misdemeanors after getting pulled over in his car. But he doesn't have to be here. He has been granted bail. A judge has decided he is likely to show up for court when he's supposed to — if he can post a $1,000 cash deposit. A bondsman has offered to post the money for him, for a $400 nonrefundable fee.

So like thousands of inmates here and hundreds of thousands nationwide, Green is left with two options: He can fight his case — but he'll have to do it from here, behind bars — or he can plead guilty and take the 60-day sentence prosecutors are offering him and go home.

The only problem, he says in a hushed voice so other inmates don't hear him, is that he believes he's not guilty.

"It's not a choice," Green says, "because if you don't have money, you have to stay here. It's ruining your life either way you put it. Either way, you have to be here."

Court records show he was arrested June 7, after being stopped for speeding. What happened next is in dispute. Officers say he was belligerent, assaulted them and resisted arrest. Green says he was pulled over for no reason, treated with disrespect and attacked by the officers.

Green wants a jury to decide who was right and who was wrong. He also knows a guilty plea is not helpful to the job prospects of a 25-year-old black man with a previous record — a minor weapons charge from several years ago.

But as he stands here, you can hear him start to waver. He's done almost half the 60 days already. 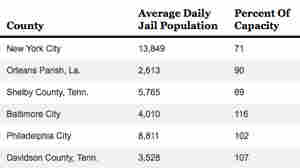 Chart: Jails Stuffed To Capacity In Many U.S. Counties

Bronx District Attorney Robert Johnson declined NPR's request to talk about bail. But Marty Horn, then-commissioner of New York City's jails, says he sees this scenario play out every day as he walks the hallways of Rikers Island.

Does that seem fair?

"I think our system unfortunately forces them to make a difficult choice," Horn says.

Fighting It Out From The Boat

More than a half-million inmates are facing this choice on any given day in the nation's jails. Most are nonviolent defendants charged with petty crimes. They're not considered a threat to society or likely to flee. But it will cost taxpayers $9 billion a year to feed, house and clothe them.

Green is determined to fight his case. He has already lost his apartment and his job holding traffic signs for Con Edison. He doesn't have much left to lose. Still, he doesn't sound too convincing.

"I try not to let my mind and emotions get discouraged," he says. "It's hard, but you just have to do it."

A week later, Green is still sticking it out. He calls me collect from one of the day room's pay phones after bartering with the inmates who control the phones.

"Every day is something different or something new," he says over a crackly phone line. "Especially at night. You just got to mind your business and, hopefully, wake up the next day."

But by mid-July, nearly a month and a half after arriving at The Boat, Green calls again, this time to say he is done. He is going to take the deal.

"Honestly, I just want to go home," he says, sounding as if he is on the verge of tears.

He misses his daughter. And his baby's mother hasn't been able to pay the bills without his income.

"It's just that my family's out there," Green says. "And it's going to make it seem like I'm trying to be greedy for just sitting in here. That's like being selfish."

Yet a few minutes later, he sounds like he still can't quite bring himself to accept the plea deal.

"At the end of the day, if I take this plea, that's another charge on my record for nothing," he says. "They get to win, and at the end of the day ..." Suddenly the phone goes dead. When Green calls back a while later, he is vague about what happened. He says he doesn't want to talk about it. He sounds defeated.

"If I was wrong, I wouldn't be going through this," he says. "I'd just be doing my time, that's it, because I just want to get it over with. But it's hard. I [have to] sit here, I [have to] take all this, because I want to prove a point, you know?"

A few days later, just as he is about to accept the prosecutors' deal, a small miracle happens for Green. His baby's mother scrapes together the last of the $400 she has been saving to pay the bail bondsman. And several hours later, Green is free.

Four months after that, Green is sitting on a park bench in the Bronx in a light November rain. Just a few moments earlier, a judge postponed his case again for two more months. But Green doesn't seem to mind.

He opens an old plastic umbrella and holds it over my head instead of his own. Its edge frames Yankee Stadium just down the hill — the old one, where, years ago, his grandmother took him before she died.

"The whole time we were eating popcorn and sodas," Green remembers. "We had fun. You know, I miss my grandmother."

It was his first and last visit, he says.

The Cost Of Trial

As he talks, it's hard to imagine Green surviving these months behind bars, waiting for his day in court. At this point, he would have been locked up four times longer than the punishment prosecutors were offering him.

"Being in jail makes you feel like there's no use to fighting because [prosecutors] already have it set in your mind that you're going to do jail time no matter what," he says. "You're going to be away from your family and that's just that."

Green has no money, no job, no place to live. And his case is months from being resolved. But for the first time since I met him, he seems almost invigorated.

"I'm willing to wait as long as five years if I have to, because I know I'm going to win," he says. "That's just how I feel."

Green may be guilty or he may be innocent. But the point, he says, is that it's no longer up to the prosecutors, the police, the jail system or even just his willingness to stay in jail. It will be up to 12 New Yorkers he has never met. And the cost of that centuries-old privilege for Shadu Green, it turns out, was $400.