Accessibility links
No Handouts, States Compete For Education Aid The billions of dollars for schools in the Obama administration's "Race to the Top" fund come with a number of strings attached. Some states have changed laws to comply with the requirements. 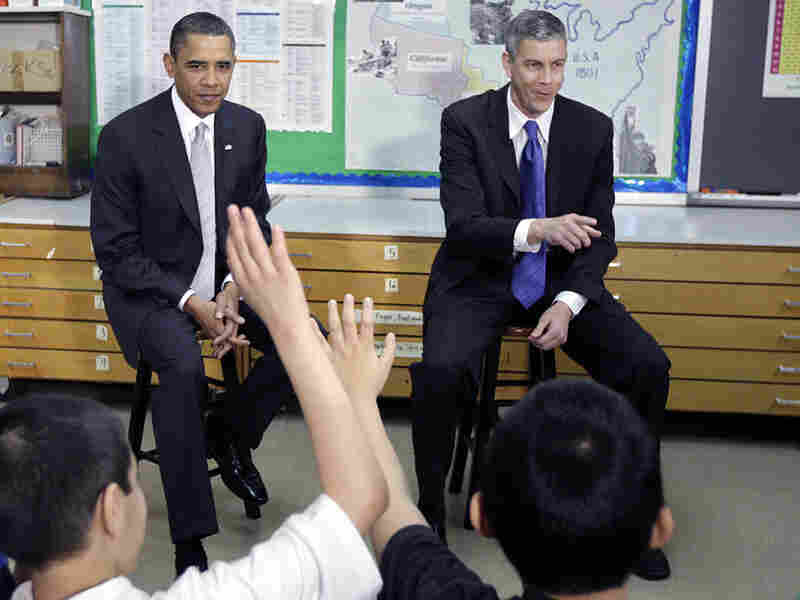 The Obama administration is offering $5.6 billion in federal aid for education. The money comes with a list of qualifications that states must meet, however. Alex Brandon/AP hide caption

Tuesday is the deadline for states to apply for billions of dollars the Obama administration is offering in federal aid for education. About 40 states are competing for some of the $4.3 billion in the administration's "Race to the Top" fund.

President Obama and Secretary of Education Arne Duncan are convinced that the money will entice cash-starved states to adopt some or all of the reforms they have been pushing.

But states have to qualify even to apply for the funds.

They must shut down failing schools and allow more privately run charter schools to open. They must develop tougher tests tied to higher academic standards. They have to collect better data to track student progress and make teacher training more rigorous. And finally, they must allow teachers to be evaluated based on their students' performance and test scores.

"If it sounds prescriptive, that's because it is," says North Carolina Gov. Bev Perdue.

Race to the Top

Race to the Top is a $4.3 billion competitive grant program from the federal government to encourage and reward states for innovation in reforming K-12 education. States are competing for grants of up to $700 million.

The program is part of the Obama administration's $787 billion economic stimulus package.

To qualify for Race to the Top grants, states must commit to:

3. Tracking student performance and making data available to researchers and the public

4. Allowing teacher and principal evaluations to be linked to student achievement

Perdue has been critical of Race to the Top because it's what she calls a "cookie cutter" approach to school reform and doesn't let states do what they think is best for their schools. But, she says, "at the end of the day we all have to do what's best for this country's future."

North Carolina did apply and could get $400 million in Race to the Top funds.

To improve their chances at getting the money, about a dozen states changed their laws or introduced new legislation to comply with some of the more controversial requirements. Some removed the cap on the number of new charter schools that can open every year. Others will now allow schools to link teacher evaluations to student achievement.

That's a huge concession, and only one of the nation's powerful teachers unions has agreed to it. Despite opposition from many of its rank and file, the American Federation of Teachers says it now supports the idea. The National Education Association has not commented.

Tom Dooher, president of Education Minnesota, that state's largest teachers union, calls Race to the Top "coercive." He says superintendents are telling teachers that they should go for it because it may be the only money they get for years.

"But we shouldn't have the pursuit of money be a blind stampede to something that doesn't really help students," says Dooher.

He says teachers in Minnesota did not endorse their state's application for Race to the Top funds because they had little or no say in the application process.

Teachers and local school officials in California, Kansas, Florida, Michigan and Indiana also withheld their support. About a dozen states, including Texas, didn't even apply. Some thought the money came with too many strings attached. Others simply weren't sold on the reforms the administration is pushing.

Duncan says he doesn't care if Race to the Top is a tough sell.

"All of this money is voluntary," he says. "If states don't want to apply or compete they have every right not to do that. But I will tell you that when we put billions of dollars on the table, you'll see people more than step up."

The $4.3 billion in Race to the Top funds will be disbursed in April and again at the end of the year.

On Tuesday, Obama announced he is tossing an additional $1.3 billion into the pot. That money will come from his 2011 budget request.