Accessibility links
Spirited Cooking: Keep Some Liquor In The Kitchen Alcohol is a key ingredient in a fair share of holiday dishes, but there's reason to keep liquor in the kitchen the rest of the year: tequila-marinated chicken, for one, or vodka sauce for pasta. Aside from imparting its own flavor, alcohol can bring out the best in other ingredients.

Spirited Cooking: Keep Some Liquor In The Kitchen

Spirited Cooking: Keep Some Liquor In The Kitchen 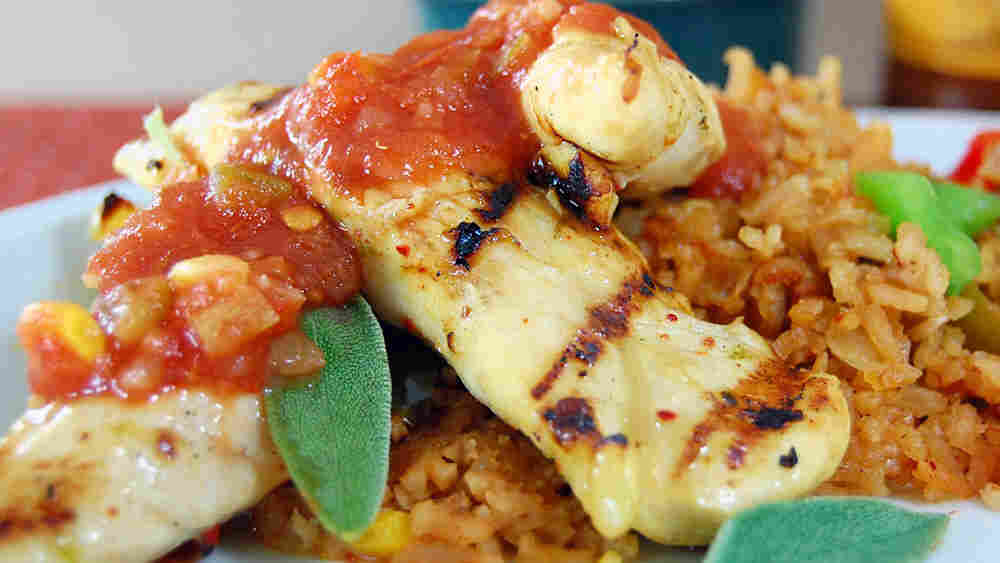 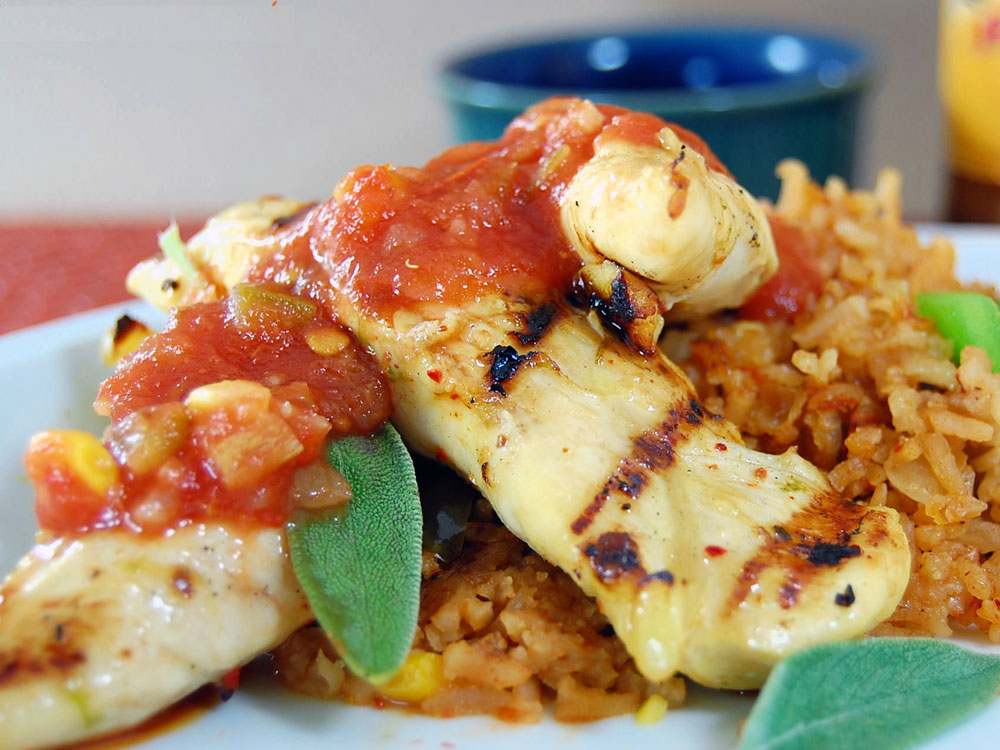 At the moment, my liquor cabinet is a bit bare, having been depleted by the holiday cooking season. We had bourbon cake and rum balls, plum pudding and fondue — and let's not forget the eggnog. In addition to wine, I have some rum, vodka, Amaretto and Triple Sec left. But not long ago, the cabinet was packed with tequila, bourbon, Calvados, brandy, vermouth, Scotch and even more wine — all of it mostly dedicated to the pan and not the glass. In fact, I seldom drink anymore, but the various forms of spirits still have a prominent place in my cooking.

As the bourbon evaporates, the alcohol and water in the bourbon escape into the air, leaving the flavor of the bourbon behind. That is usually the goal when cooking with spirits. It isn't the booze, but the flavor.

My chicken piccata wouldn't be the same without vermouth in the sauce, and my recipe for canard au vin even has "wine" in the name. Beer often is an underappreciated part of an ingredient list, and liqueurs are frequent additions to desserts. For example, I use Triple Sec in my cranberry mousse, and I have a recipe for blueberry bread pudding with Amaretto. More potent distilled spirits, however, also have their place in the kitchen.

The Irish have a tradition of serving bread pudding with Irish whiskey at Christmas. When I make chicken enchiladas, I typically poach the chicken in tequila and then use the poaching liquid in my enchilada sauce. On Thanksgiving weekend, I usually make bourbon cake — and by the time I serve it at Christmas, it contains almost a fifth of bourbon.

In the month between Thanksgiving and Christmas, I do indeed add nearly a fifth of bourbon, but much of that bourbon evaporates. If it didn't, instead of a moist cake you'd have a sopping wet cake. As the bourbon evaporates, the alcohol and water in the bourbon escape into the air, leaving the flavor of the bourbon behind. That is usually the goal when cooking with spirits. It isn't the booze, but the flavor. 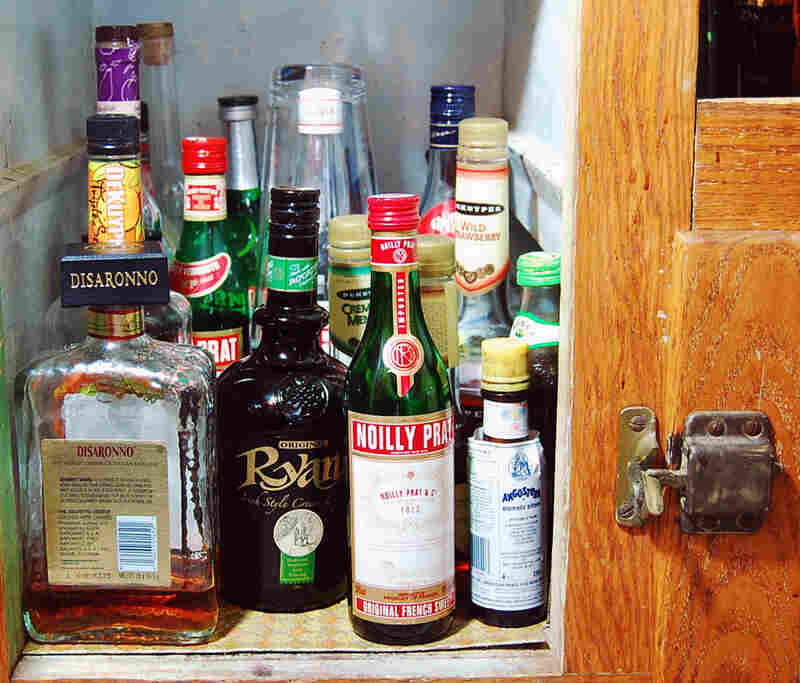 Alcohol boils (converts to steam) at around 78 degrees Celsius, and water boils at 100 degrees Celsius, so a moderate simmer will cause the alcohol in a dish to evaporate much faster than the water, but not completely. Alcohol and water have an affinity for each other and form what's called an azeotropic mixture, which means the water is hesitant to let go of the alcohol, even though the alcohol wants to become steam. Nevertheless, depending on cooking method and time, you can reduce the alcohol by 60 percent by simmering for 15 minutes, or by as much as 90 percent after two hours of simmering.

Evaporation isn't the only factor, though. Dilution plays a role in how much alcohol is in a dish. Say a recipe calls for 1/4 cup (2 ounces) of vodka and you use 100-proof vodka. The proof is double the liquor's actual alcohol content, so those 2 ounces of vodka contain 1 ounce of alcohol. Simmer it in a sauce for 15 minutes, and you're left with not quite a half-ounce of alcohol. If the sauce serves four people, then you're down to an eighth of an ounce, or less than a teaspoon, of alcohol per person — not much.

After working as editor of various computer magazines, Kevin D. Weeks is now a personal chef in Knoxville, Tenn. Weeks also teaches cooking classes, is the Guide to Cooking for Two at About.com, and blogs at Seriously Good.

With the exception of vodka, which is flavorless unless specifically flavored, most spirits contribute more than flavor. There are flavor compounds that are soluble by alcohol but not by water or heat alone. The alcohol can liberate these flavors and even create new flavors by creating new chemical bonds. Therefore, I'm generally opposed to substituting something for the booze. There's often more going on in the dish than a simple substitution of, say, vanilla for bourbon or orange juice for Cointreau can make up for. Besides, the alcohol that does remain adds a certain snap and brightness to the dish. If sensitivity to alcohol, for whatever reason, is a problem for anyone eating a dish, choose another recipe.

Additionally, alcohol will denature proteins (breaking down the proteins just as acid and heat do), so it's sometimes used in marinades because it tenderizes the meat. Be careful, though, when using something with a high alcohol content like tequila or bourbon in a marinade, because the meat can become mushy if marinated too long. The effect of denaturing proteins is obvious when making eggnog, where the alcohol will actually scramble (curdle) the eggs if not added slowly and whisked in vigorously.

Mostly, however, spirits are added for their flavors and for their effects on other flavors. I find that the sharpness of hard liquor works best with pork and least well with beef; I suspect this is because hard alcohol emphasizes beef's mineral-like flavors. Chicken takes well to tequila and rum, as does pork, which also pairs nicely with bourbon and even Scotch. Lamb does well with Scotch and Irish whiskey. Brandy seems to work with almost everything if thoughtfully used. And don't forget distilled wines such as Calvados (apple brandy), schnapps, Cointreau, and Benedictine. Kirshwasser is an integral part of fondue, and some claim it lowers the melting point of the cheese, producing a smoother mixture.

I'll gradually replenish my liquor cabinet over the next few months, picking up a fifth here, a pint there (and sometimes even those little airline bottles if I need something like peppermint schnapps that I'm unlikely to need again for two or three years) as I cook this or that. I have a recipe for lamb with Scotch that I want to try, and there's a chocolate mousse with a dollop of Irish whiskey that looks interesting. Spirits will continue to have a place in my kitchen pantry as well as the liquor cabinet.

I was browsing through some dark corners of my computer's hard drive several months ago and discovered this recipe dating back almost 20 years. When I first came up with the recipe, I only used a teaspoon of salt in the marinade, which I then reduced and thickened with corn flour to make a sauce. My notes indicated the tequila flavor wasn't particularly prominent in the chicken, so I bumped up the salt level to make a brine and draw the tequila flavor deeper into the meat. Then, for a sauce, I used a store-bought salsa, which I simmered with a bit more tequila. It was much better. 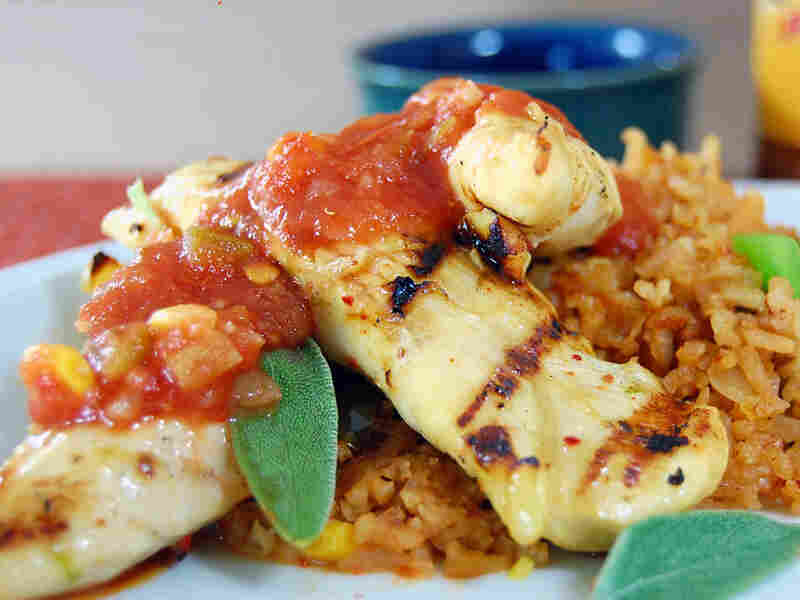 Combine 1 cup tequila and all other ingredients (except chicken) in a small saucepan and bring just to a boil, stirring occasionally. Remove from heat and cool to room temperature. Pour brine into a 1-gallon zippered bag, add chicken and refrigerate for 6 hours.

In the meantime, gently simmer 2 cups of your favorite tomato salsa with the remaining 2 tablespoons of tequila in a small saucepan over medium heat for 15 minutes.

Heat up a grill or a grill pan to medium high. Drain and discard the brine and pat the tenders dry. Brush the grill or grill pan with oil and grill tenders for 2 to 3 minutes per side, until cooked through.

Sweet potato pie is an old Southern tradition. And when I see the words "Southern" and "tradition" combined in a recipe, I automatically think "bourbon." So I cobbled together a recipe, replacing part of the liquid with bourbon and adding some bourbon and sugar to whipping cream for a topping. Yum. 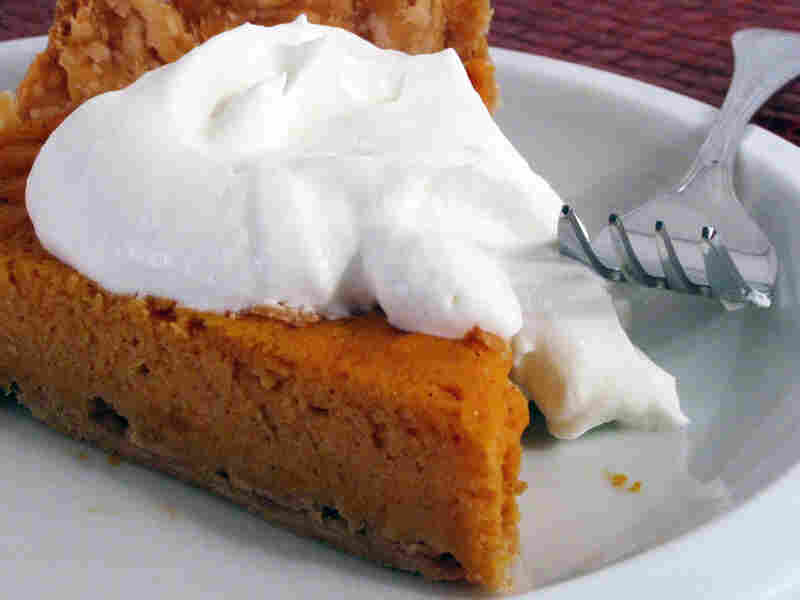 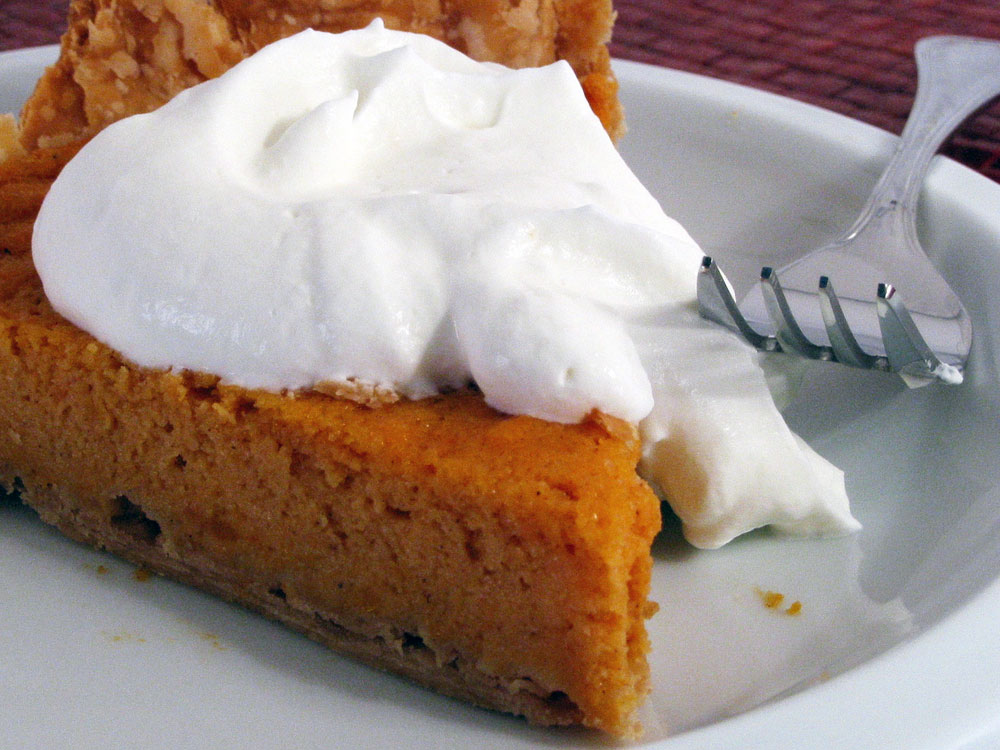 Pastry for a 9-inch, single-crust pie

Arrange the pie crust in a pie plate and trim to fit. Poke holes in the bottom and sides using a fork. Place a piece of parchment paper in the pie pan and add a pound of dried beans or pie weights. Cook pie crust for 20 minutes, remove the parchment and weights and cook 5 minutes longer until a very light brown. Set on a rack to cool.

Separate eggs, cover and allow whites to warm for about 1 hour. This will enable them to incorporate more air and whip more quickly. (The yolks can be refrigerated until ready to use.)

Steam sweet potatoes until tender, about 20 minutes. Allow to cool. Then, in a 2-quart bowl, mash with a fork or potato masher. Add butter, bourbon, coriander, allspice and salt and mix thoroughly.

Beat the egg yolks lightly, add the sugar and continue beating until the mixture is a creamy yellow color. Stir the yolk mixture into the sweet potatoes and mix thoroughly. Add the flour, about a teaspoon at a time, mixing well after each addition. Stir in buttermilk.

Whip the cream to soft peaks, then add sugar and bourbon and whip to stiff peaks.

Cool pie completely on a rack and serve either at room temperature or cold with topping.

My father seldom speaks of his experiences during World War II, but an obviously cherished memory is a bottle of Calvados for which he traded a pair of "captured" boots in France. Calvados is an apple brandy made in Normandy. It's a potent liquor, distilled from apple cider with a distinct apple character, and apparently Dad and a couple of mates got pretty tipsy drinking it. This recipe marries pork, apples, Calvados and cream in an elegant and delicious combination. 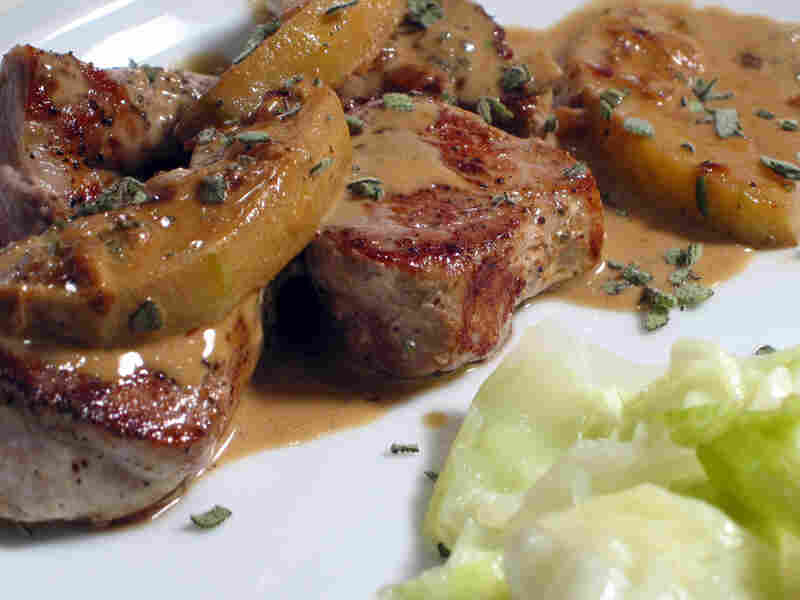 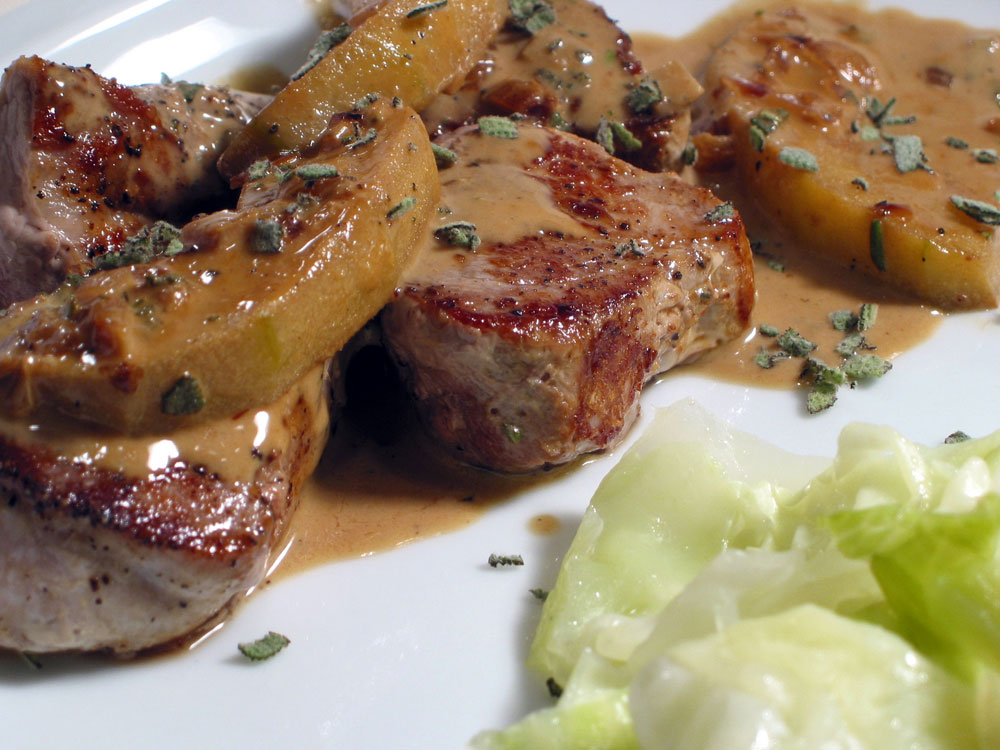 Season pork medallions generously with salt and pepper. Heat oil in a skillet (not nonstick) over medium heat. Add pork and cook on each side until browned, 3 to 4 minutes per side. Place medallions on a plate in the oven.

Add butter to skillet. Add shallots, apple slices, sage and rosemary and saute until lightly browned. Remove from heat, add Calvados, and ignite brandy to burn off some alcohol. Return to heat and add chicken broth, scraping up browned bits. Reduce liquid by half. Add cream and reduce to desired consistency. Divide pork between plates and spoon sauce over the top.

Some flavor compounds are alcohol-soluble; among them are some tomato flavors. So although vodka brings almost nothing of its own to the flavor of this sauce (besides a bit of snap), it does enhance the flavor of the sauce, which is particularly valuable if you're using canned tomatoes or bland supermarket tomatoes. Though it's traditionally made using heavy cream in addition to the vodka, I like using a mixture of cream and ricotta. 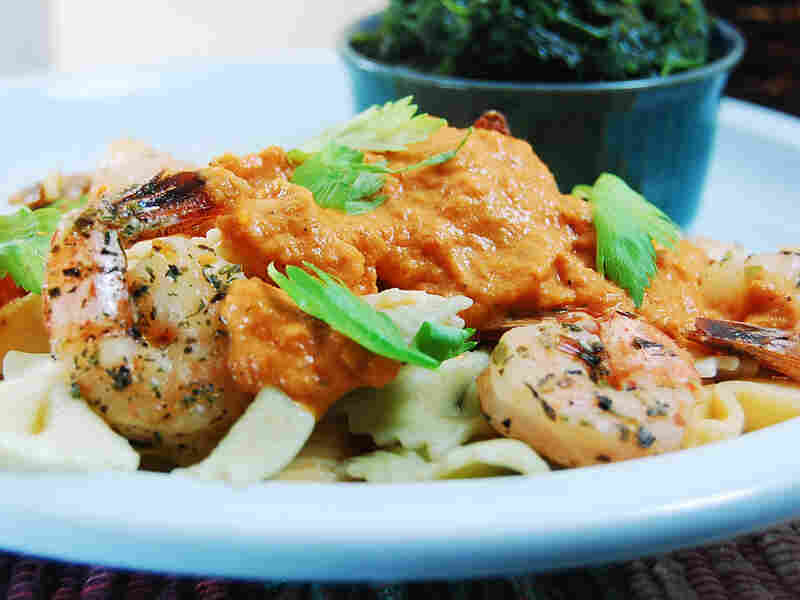 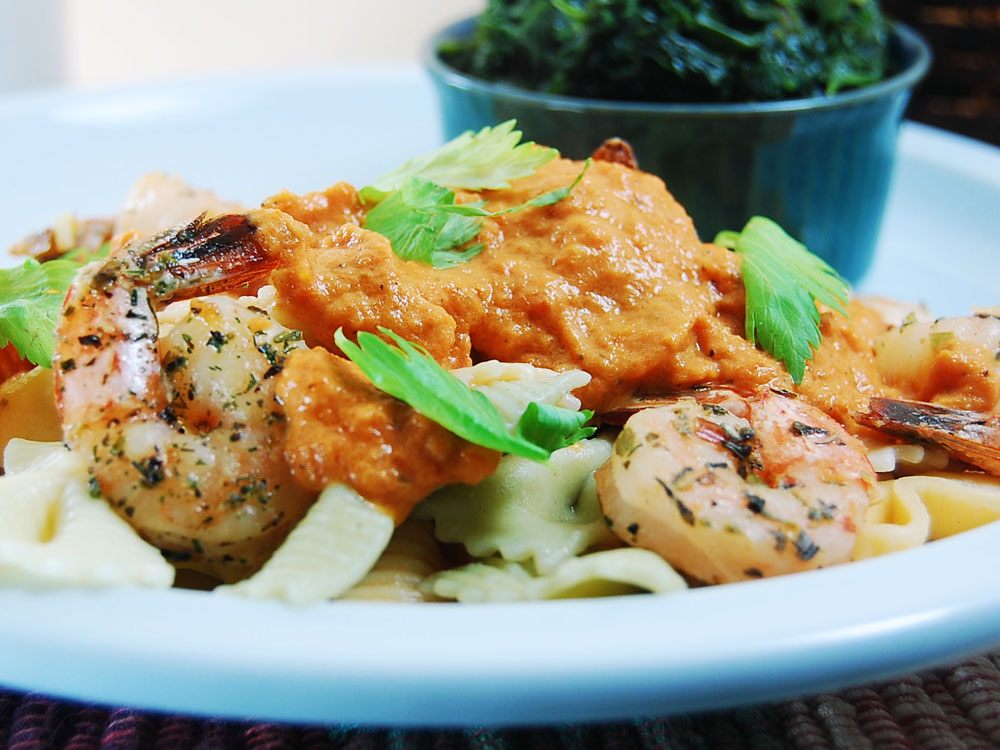 1 15-ounce can of petit-diced tomatoes

Remove bay leaf and puree in a blender; taste and adjust seasonings.

I like serving this over farfalle with shrimp sauteed in olive oil, garlic, pancetta and Italian herbs. But it's good over plain pasta as well.