Since the release of its 2005 album Nobody's Darlings, Lucero has taken its rough-hewn, punk-infused alt-country to the forefront of the Memphis rock scene. A love letter of sorts to the band's hometown, 1372 Overton Park is Lucero's first release since 2006's Rebels, Rogues & Sworn Brothers. The album remains true to the group's gritty roots, but it's more soulful than previous efforts, with bombastic, swaggering arrangements.

"The Devil and Maggie Chascarillo"

"That Much Further West" 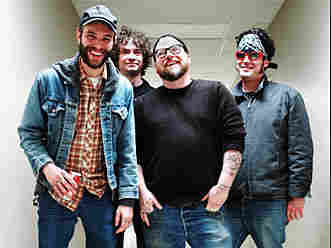 Of the two tunes pulled from 1372 Overton Park for this World Cafe session, "The Devil and Maggie Chascarillo" highlights the horn arrangements by Memphis session player Jim Spake, while elsewhere, Bruce Springsteen's influence has begun to creep into Lucero's ever-expanding list of influences. Alongside the two new songs, Lucero also plays the title track from 2003's That Much Further West.