Accessibility links
Haiti Quake Transforms Neighboring Dominican Republic To Offer Aid The Dominican Republic shares an island with Haiti and has sought to share the burden of the international recovery effort. After decades of strained relations, there are signs that the quake may be altering the relationship between the two very different countries. 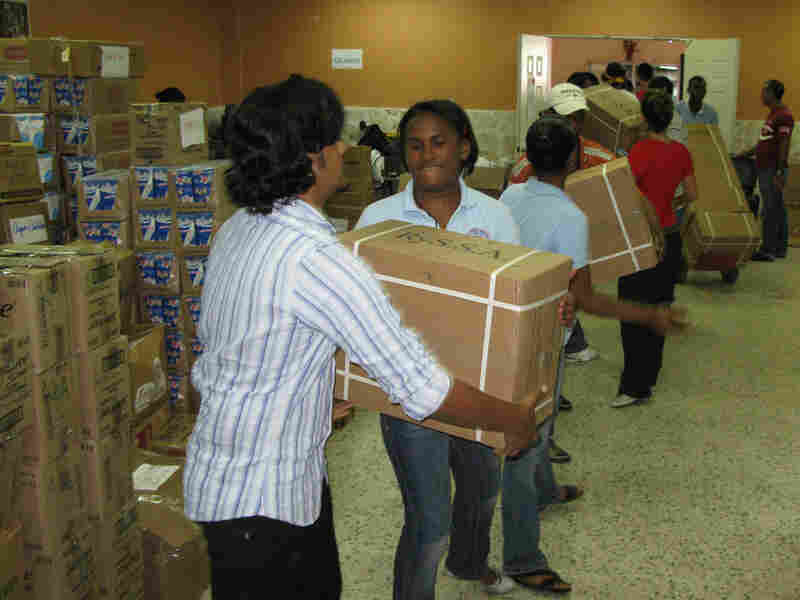 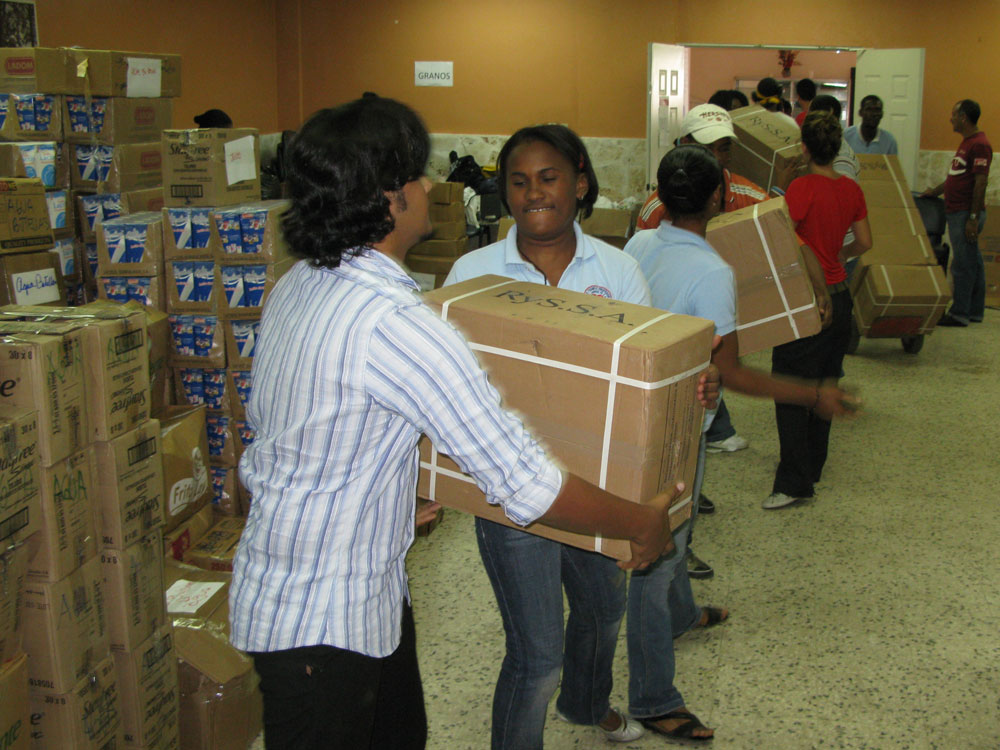 Volunteers at work Monday at the Centro Bono, a Jesuit organization in Santo Domingo. The organization is sending medicine, food, blankets, clothing, shoes and water to Haiti.

In an unprecedented gesture of neighborliness, the Dominican Republic has opened its border to injured Haitians. Traditionally, relations between the two countries are strained at best. Now there are fresh hopes that things could improve.

Many injured Haitians are being treated at the Dario Contreras public hospital in the capital, Santo Domingo. Forlorn Haitians of all ages lie in hospital beds that line the corridors of the hospital, their gruesome wounds bandaged, their arms attached to IV bags.

Dominican Republic President Leonel Fernandez was the first head of state to visit Haiti after the Jan. 12 quake, and he has pledged his country's support for the reconstruction effort.

"I never thought the Dominican president would do this," said a 50-year-old Haitian woman who came to the hospital with hopes of finding her mother, who has not been heard from since the earthquake. "He extended his hand to Haitians. He's shown that he loves the people of Haiti."

All over town, Dominicans are bringing relief supplies into collection centers to be loaded onto trucks that will make the six-hour overland journey to Port-au-Prince. At Centro Bono, a Jesuit charity, volunteers pack boxes full of penicillin, canned food, toilet paper, shoes, baby food and water.

Haiti is a poor black country, French-speaking, basically living on subsistence agriculture. The Dominican Republic — Spanish, Latin, export-focused economy, tourism. You couldn't have had two more different worlds and they meet at the border.

No one remembers an outpouring like this before, not even when Haiti got hit by four tropical storms in 2008 and its flooded towns begged for assistance.

But the earthquake is different, said Sonia Adames, director of the Jesuit aid center.

"Truly there is a lot of prejudice toward Haiti in the Dominican Republic. But this earthquake that has physically shaken Haiti has also shaken Dominican society. People have their hearts in their hands," Adames said.

Despite this momentary outbreak of brotherly love, the old fears are there, she said.

Indeed, in the narrow streets of the capital's old Spanish colonial sector, the earthquake has heightened age-old worries of a human stampede from Haiti that could overwhelm the Dominican Republic and dilute its Hispanic culture.

Haitians make up 10 to 20 percent of the Dominican Republic's 10 million people. They do the hard, low-paying labor such as sweeping streets, cutting sugar cane and laying bricks.

"We had lots of Haitian immigrants before, and now we're going to have even more. And for good reason, because what happened was huge," said Julio Cesar Rivera, who sells rosaries in front of the cathedral. "But we can't absorb anymore. Our hospitals don't have any more bed space. We need to help them, but we Dominicans need help, too."

Hispaniola is the only island in the world shared by two countries that are so different, said Dan O'Neil. As director of the Pan American Development Foundation in Santo Domingo for the past 12 years, O'Neil spends equal time in both countries.

"Haiti is a poor black country, French-speaking, basically living on subsistence agriculture. The Dominican Republic — Spanish, Latin, export-focused economy, tourism. You couldn't have had two more different worlds and they meet at the border," he said.

At the moment, the Dominican Republic is being transformed into a staging ground for the burgeoning Haitian relief effort, and it will continue to play this role during the long reconstruction process. With gridlock at Haiti's airport, relief workers, journalists and now the U.S. military are streaming into the Dominican Republic's airports.

"Of course, it will benefit the Dominican Republic," said Rosa Maria Garcia, president of the Dominican-Haitian Chamber of Commerce.

Dominicans have long grimly observed Haiti's seemingly endless misfortunes, but in the past week some have dared to think: Perhaps Haiti can rebuild and get a fresh start, and things will be different this time.

Because in the end, Dominicans know they cannot fully thrive unless their destitute neighbor comes along, too.

As they say here, the island of Hispaniola is a bird with two wings, a marriage without divorce.