Accessibility links
Teen Drinking May Cause Irreversible Brain Damage For teenagers, the effects of a drunken night out may linger long after the hangover wears off. A recent study finds damaged nerve tissue in the brains of teenagers who drink heavily, and poorer performance on thought and memory tests. 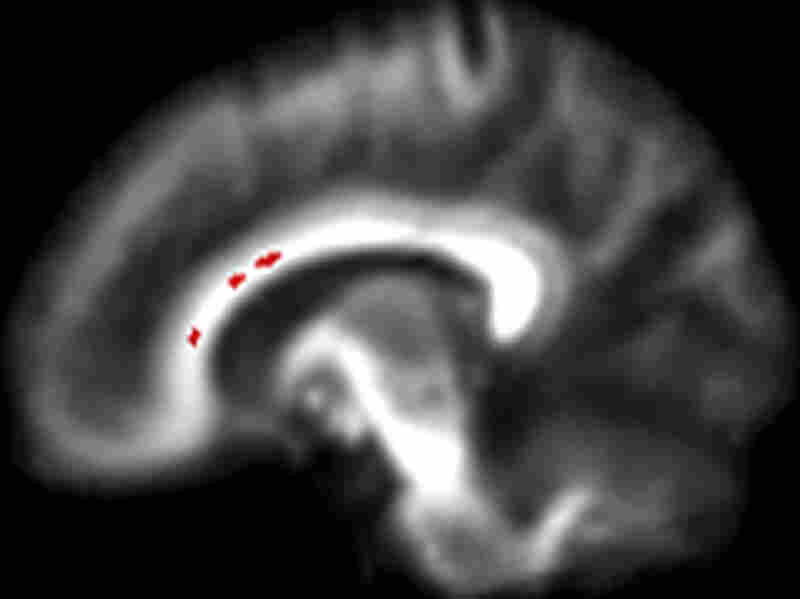 The red specks highlight where the integrity of the brain's white matter is significantly less in the teens who binge drink, compared to those who do not. Courtesy of Susan Tapert/Tim McQueeny, UCSD hide caption 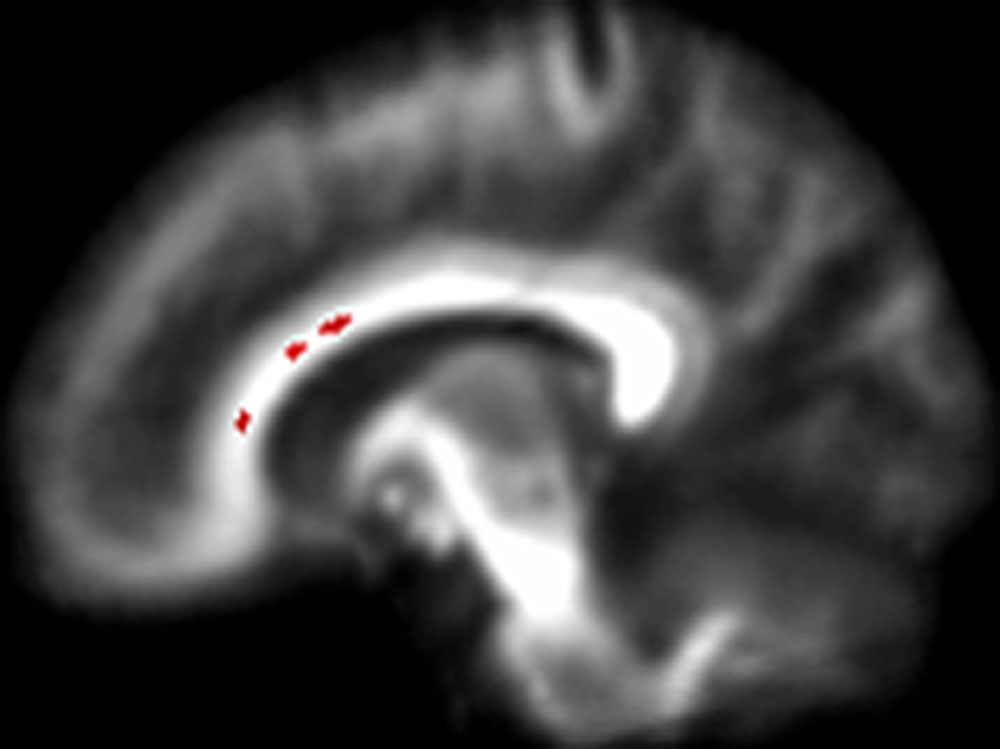 The red specks highlight where the integrity of the brain's white matter is significantly less in the teens who binge drink, compared to those who do not.

For teenagers, the effects of a drunken night out may linger long after the hangover wears off.

Tapert's team found damaged nerve tissue in the brains of the teens who drank. The researchers believe this damage negatively affects attention span in boys, and girls' ability to comprehend and interpret visual information.

"First of all, the adolescent brain is still undergoing several maturational processes that render it more vulnerable to some of the effects of substances," Tapert says.

In other words, key areas of the brain are still under construction during the adolescent years, and are more sensitive to the toxic effects of drugs and alcohol. 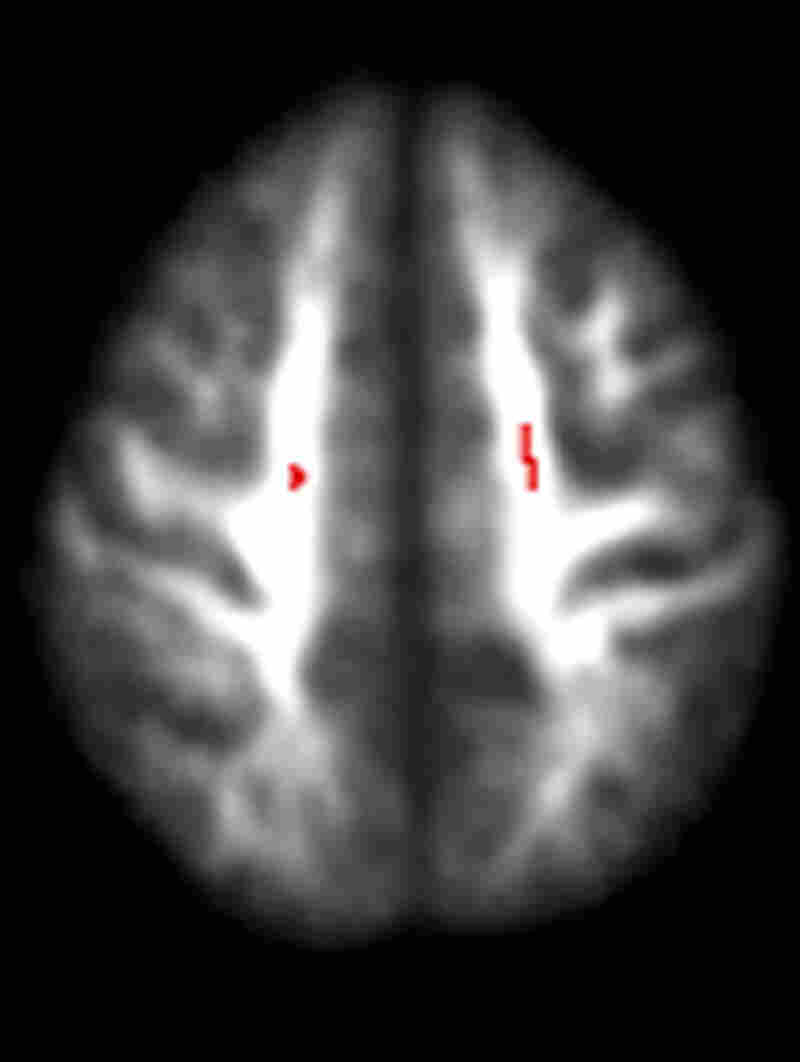 For the study, published last month in the journal Psychology of Addictive Behaviors, Tapert looked at 12- to 14-year-olds before they used any alcohol or drugs. Over time, some of the kids started to drink, a few rather heavily — consuming four or five drinks per occasion, two or three times a month — classic binge drinking behavior in teens.

Comparing the young people who drank heavily with those who remained non-drinkers, Tapert's team found that the binge drinkers did worse on thinking and memory tests. There was also a distinct gender difference.

"For girls who had been engaging in heavy drinking during adolescence, it looks like they're performing more poorly on tests of spatial functioning, which links to mathematics, engineering kinds of functions," Tapert says.

"For boys who engaged in binge drinking during adolescence, we see poor performance on tests of attention — so being able to focus on something that might be somewhat boring, for a sustained period of time," Tapert says. "The magnitude of the difference is 10 percent. I like to think of it as the difference between an A and a B."

Teenage Tendency To Experiment To Blame

Pediatrician and brain researcher Ron Dahl from the University of Pittsburgh notes that adolescents seem to have a higher tolerance for the negative immediate effects of binge drinking, such as feeling ill and nauseated.

"Which makes it easier to consume higher amounts and enjoy some of the positive aspects," Dahl says. "But, of course, that also creates a liability for the spiral of addiction and binge use of these substances."

He adds that there is a unique feature of the teenage brain that drives much behavior during adolescence: The teen brain is primed and ready for intense, all-consuming learning.

"But those same tendencies to explore and try new things and try on new identities may also increase the likelihood of starting on negative pathways," he adds.

Tapert wanted to find out in what way binge drinking affects a teen's developing brain. So using brain imaging, she focused on the white matter, or nerve tissue, of the brain.

"White matter is very important for the relay of information between brain cells; and we know that it is continuing to develop during adolescence," Tapert says.

So Tapert imaged the brains of two groups of high school students: binge drinkers and a matched group of teens with no history of binge drinking. She reports in her recent study a marked difference in the white matter of the binge drinkers.

"They appeared to have a number of little dings throughout their brains' white matter, indicating poor quality," Tapert says.

"These results were actually surprising to me because the binge drinking kids hadn't, in fact, engaged in a great deal of binge drinking. They were drinking on average once or twice a month, but when they did drink, it was to a relatively high quantity of at least four or five drinks an occasion," she says.

In another study, Tapert reported abnormal functioning in the hippocampus — a key area for memory formation — in teen binge drinkers. Reflecting their abnormal brain scans, the teen drinkers did more poorly on learning verbal material than their non-drinking counterparts.

What remains unknown, says Tapert, is if the cognitive downward slide in teenage binge drinkers is reversible.