Accessibility links
Army Doctors May Face Discipline For Fort Hood The Army said it's going to decide whether psychiatrists at Walter Reed Army Medical Center "failed to take appropriate action" against shooting suspect Nidal Hasan and were "derelict" in their duties. Among the doctors apparently under investigation is the only supervisor who actively tried to kick Hasan out of the psychiatry program. 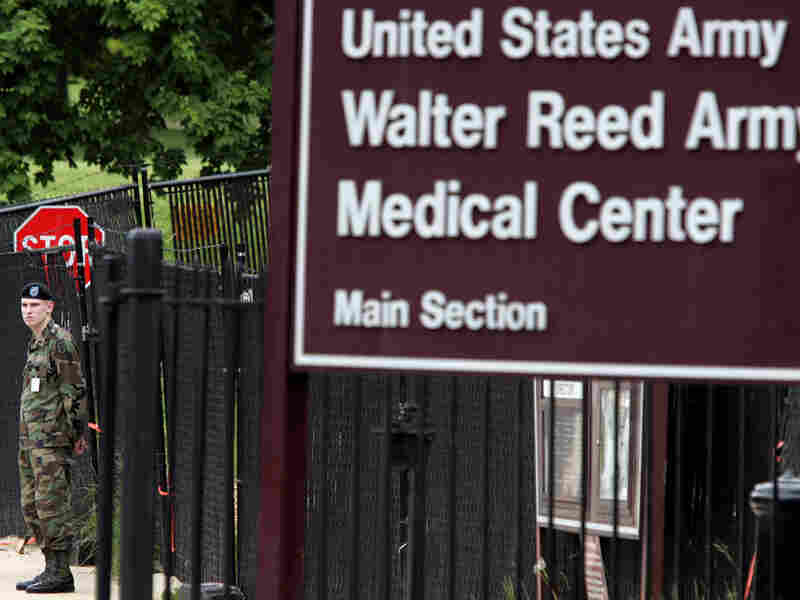 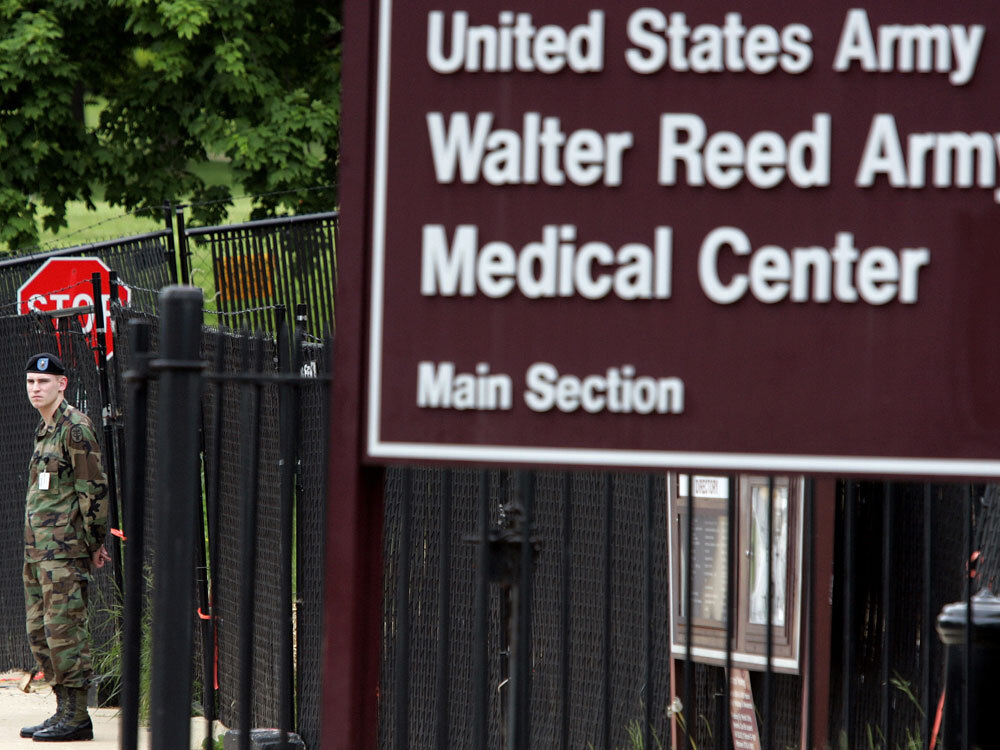 A guard stands at an exit for Walter Reed Army Medical Center.

The Army has told some of the psychiatrists who supervised Fort Hood shooting suspect Nidal Hasan that it's investigating them — and they could face punishments, from letters of reprimand to court-martial.

The Army said it's going to decide whether the doctors at Walter Reed Army Medical Center "failed to take appropriate action" against Hasan and were "derelict" in their duties.

Evidence shows that a lot of doctors had worried about Hasan — some for years. Evidence also shows that only one supervisor, Maj. Scott Moran, actively tried to kick Hasan out of the psychiatry program. Now sources involved in the investigation say Moran is one of the officers who is in big trouble. Moran wouldn't comment, but the sources say all of the supervisors under investigation are fairly low-level officers like Moran.

"They're attacking the wrong target," says Gary Myers, a lawyer who is representing Col. Charles Engel, another psychiatrist whom Myers says is under investigation.

Engel was Hasan's main supervisor in the fellowship program at the military's medical school, the Uniformed Services University of the Health Sciences. Myers says the Army is trying to find scapegoats and that everybody knows that officials in the nation's intelligence agencies bear at least some responsibility for what happened at Fort Hood.

"The notion that it is attributable to lower-level physicians who were also mentors strikes me as being a bullet fired high and to the right," he says.

Spokesmen for the Army wouldn't confirm or deny that they've notified any officers that they're under investigation.

After Moran took over the psychiatric residents program in March 2007, he reviewed Hasan's record and told colleagues they should get rid of him. Moran wrote a memo to the powerful credentials committee denouncing Hasan for a "pattern of poor judgment and a lack of professionalism." But sources and documents confirm that higher-ups told Moran to back off; they said going after Hasan might cause legal hassles.

The notion that it is attributable to lower-level physicians who were also mentors strikes me as being a bullet fired high and to the right.

Hasan then went to a fellowship at the military's medical university. Documents show that supervisors there got upset, too. Some supervisors were concerned that he seemed to have extremist Islamic beliefs. Hasan seemed obsessed with the Muslim-American soldier who killed fellow troops in Kuwait. Some supervisors even wondered to colleagues: Could Nidal Hasan be psychotic?

Sources say the Army is investigating Engel because he knew about these concerns, yet he allegedly didn't take enough action. The sources say the Army is also investigating Col. John Bradley, who ran the psychiatry department at Walter Reed until a few days ago. Colleagues say both men failed to act at least partly because they were running training programs and saw themselves as teachers who felt they were supposed to help people like Hasan try to improve. When they got on his back, the sources say, Hasan occasionally did better work.

The investigation of Moran is more puzzling because documents suggest he's the only one who actively tried to go after Hasan. Documents show that Moran did sign paperwork later that recommended Hasan for promotion, but that was after higher-ranking officers rebuffed Moran. So far, there is no sign that the Army is investigating them.

Moran, Bradley and Engel did not respond to requests for comment. Sources say the Army has notified several other mid-level officers that they're being investigated, too, but the Army wouldn't confirm those details, either.