Accessibility links
Debt Collector: Tough Job But Someone's Got To Do It As more people struggle to pay their credit card bills, one segment of the economy is booming: debt collection. It's not an easy task. Most people John Goebel calls are angry, some are apathetic, and a few break down in tears. 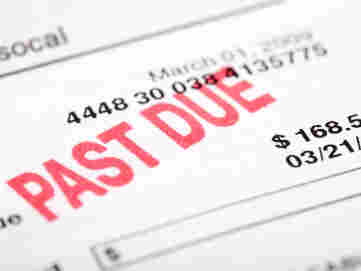 On The Planet Money Blog

As more and more people struggle to pay their credit card bills, one segment of the economy is booming: debt collection.

Third-party debt collectors take over the accounts of very delinquent credit card customers — people who haven't paid a bill in over 200 days — and try to recover the money.

It's not an easy task.

In the nearly three years that John Goebel has worked in debt collections, calling people on the phone to try to get them to pay their overdue bills, he says the responses break down into three categories: Most are angry, some are apathetic, and the occasional few break down in tears, right there on the phone.

"I'd say it happens once a week," Goebel says.

Goebel works in a cubicle. He wears a telephone headset. On his desk is an automated dialer, which weeds out busy signals and voice mail.

He tries to avoid getting into the sad stuff with people, partially because it can take a long time, and the longer Goebel stays on the phone, the less money he can recover.

But more than that, he says, "the emotional part of it, it drags you down. If someone breaks down and pours their life out to you, and then you work out something or you don't work out something, the second you hang up that call, you have maybe five seconds until the next call picks up, depending on how fast the dialer's moving.

I've heard people whispering in the background. They say, 'Tell him I'm not here,' or, 'Tell him to go to hell.'

"I think it's almost a defense mechanism," Goebel says. "You got to turn off some part of you; you can't put yourself in everyone's shoes."

Goebel says there are cases that make him feel bad. He talked to one man whose son committed suicide, whose wife left him, and whose business failed.

Goebel just apologized, hung up the phone and didn't try for any money.

But when you have people yelling at you all day long, it doesn't put you in a very charitable frame of mind. Goebel has had people curse him, lie to him, put their kids on the phone.

"I've heard people whispering in the background," he says. "They say, 'Tell him I'm not here,' or, 'Tell him to go to hell.' And it'll be what sounds like 6-year-olds saying this."

Goebel works this job, on top of his finance-related day job, to help pay off his student loans. He himself has a credit card with a balance. But these days he hardly ever uses it, unlike some of his buddies from college.

Goebel says he wouldn't be surprised if one of them turned up on his automated dialer one day. He sees debt as a little like a drug. The benefits, say a new flat screen TV, happen immediately, but the consequences don't show up for months or even years.

And a lot of people he talks to don't really understand the dangers of debt.

"There's such a knowledge gap," Goebel says. He gets the sense that he's often the first person to try to explain concepts like compound interest or 60-day average balancing.

And by the time it gets to him, it's already too late.