Accessibility links
Much-Hyped Apple Tablet Must Go Beyond E-Reading Apple is expected to announce a tablet or pad-sized media device Wednesday, which would be available for purchase in the spring. Analysts say that if the new touch-screen device offers more than just e-reading capabilities, it has the potential to create a new market for midsize gadgets. 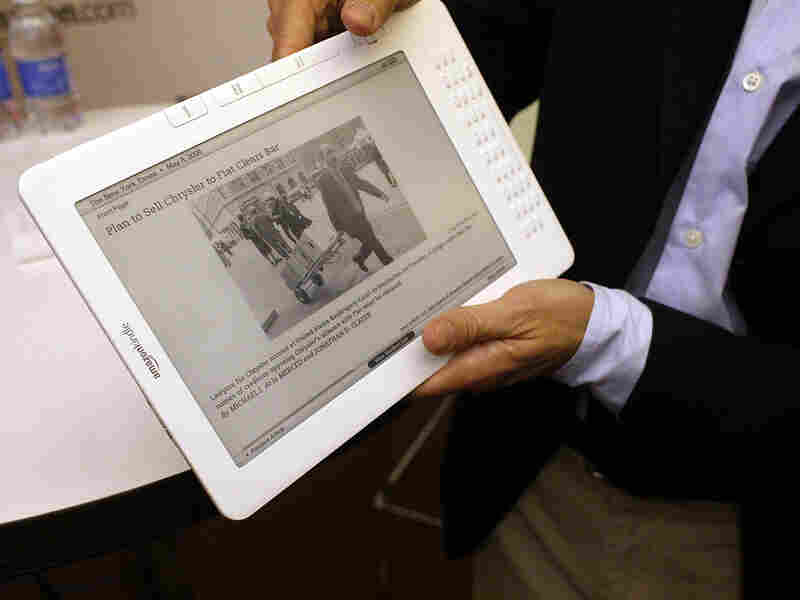 Amazon's Kindle DX is one of the e-readers that are in the midsize category. The market for e-readers has grown dramatically in the past year, but some analysts say consumers are more likely to read on smart phones. Spencer Platt/Getty Images hide caption 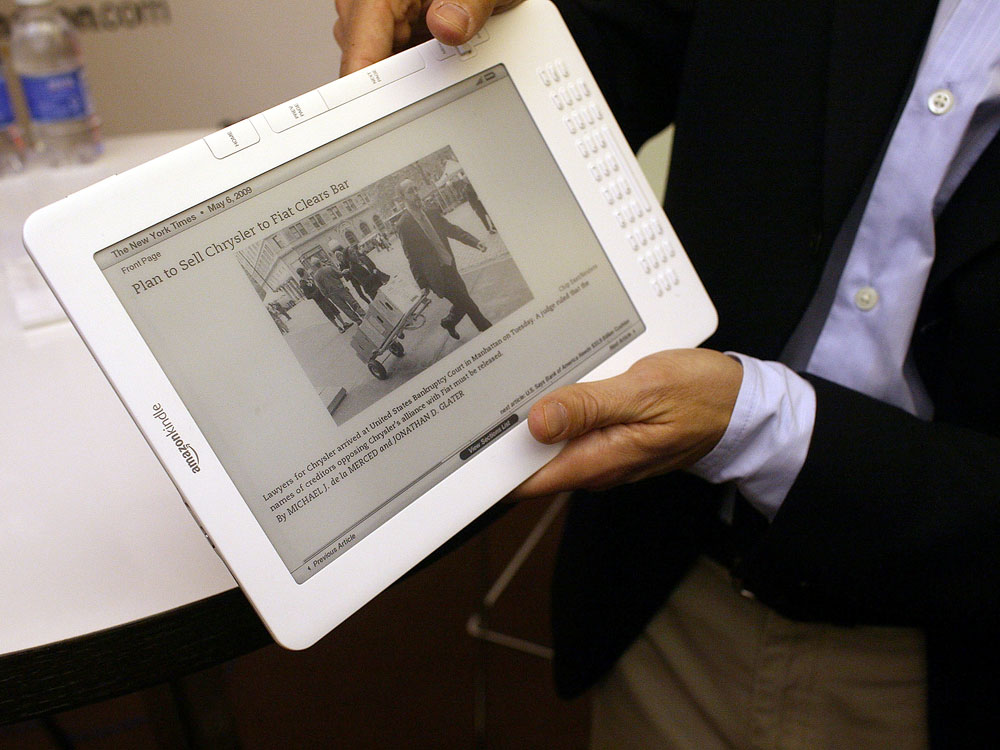 Amazon's Kindle DX is one of the e-readers that are in the midsize category. The market for e-readers has grown dramatically in the past year, but some analysts say consumers are more likely to read on smart phones.

Pocket appeal means a lot when it comes to consumer electronics.

The ability to slip a smart phone, a digital camera or an MP3 player into a pants pocket or a purse has made it easy for people to stay connected. These devices have also given people the power to entertain themselves on the go with music, e-books, videos and photos. And then there's the ability to document things on the fly by uploading content to social networking sites almost instantaneously.

Can a midsize gadget offer this same appeal?

Apple may to try to answer that question Wednesday, when it's expected to announce a tablet or notepad-sized media device, which would be available for purchase in the spring.

If the eagerly awaited new touch-screen device delivers more than just the ability to read electronic books, it will have the potential to create a new market for midsize gadgets, analysts say. 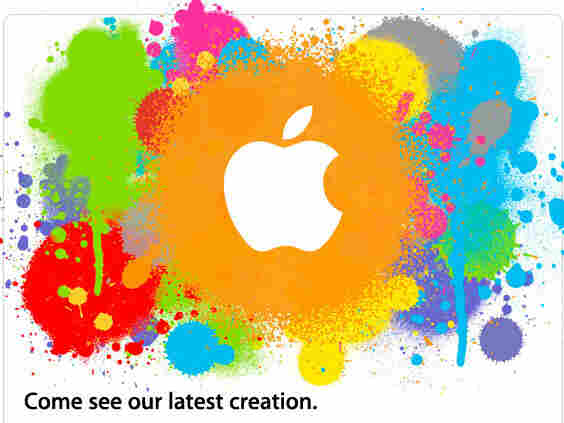 Apple sent out this e-mail invitation to an event next week, where it's expected the company will introduce a midsize tablet device. hide caption 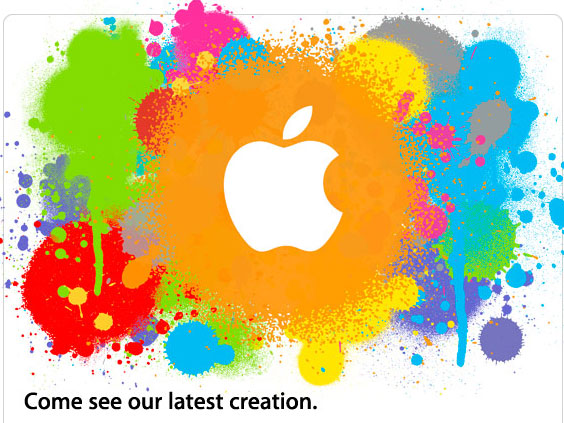 Apple sent out this e-mail invitation to an event next week, where it's expected the company will introduce a midsize tablet device.

"It has to forge new ground," says Forrester Research media and technology analyst James McQuivey. "It has to create a new kind of need for consumers."

There are already plenty of netbooks and e-readers in the midsize category with screens that typically range from 5 to 15 inches.

These devices are "easily portable, but not pocketable," says Shawn Dubravac, research director for the Consumer Electronics Association.

McQuivey says the Apple device's predicted initial price of about $700 is likely to taper off once competition enters the market.

Regardless of its form, McQuivey says demand for the new device won't come close to the built-in demand for cell phones. CTIA, The Wireless Association, says there were nearly 277 million active cell phones on U.S. wireless networks as of June 2009.

There's been lots of speculation on Web sites from MacRumors.com to PCWorld over what the Apple device may offer — including the ability to run multiple applications simultaneously, something that might appeal to corporate users.

Still, it's not clear what Apple will announce. Erica Ogg, a reporter for CNET, summed it up in a recent blog post: "Here's a summary of everything we know Apple will unveil for sure: nothing." 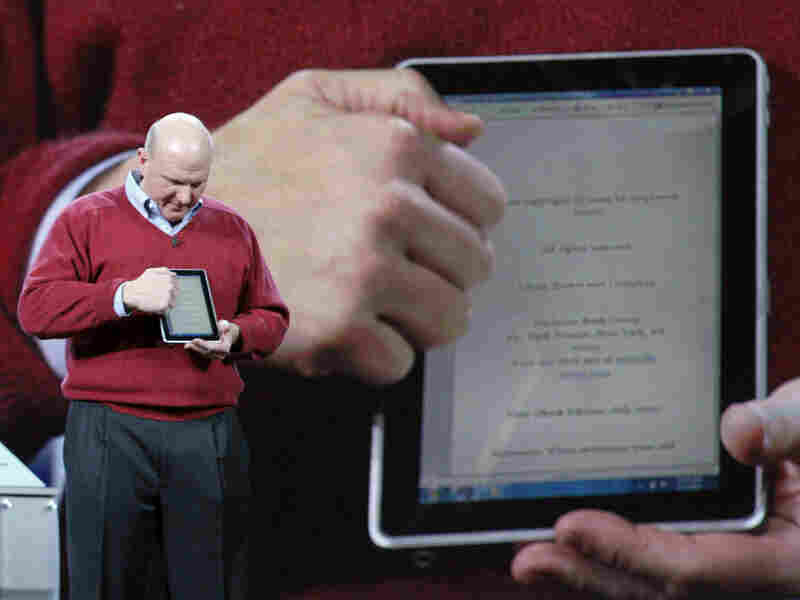 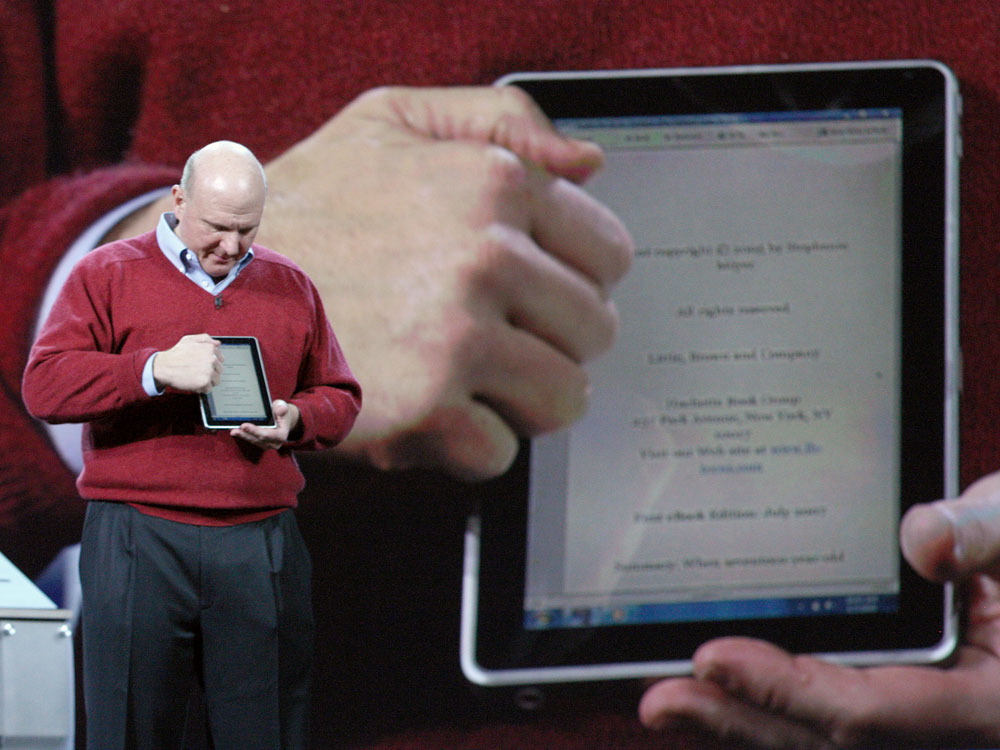 Microsoft CEO Steve Ballmer demonstrates Hewlett-Packard's slate tablet at the 2010 Consumer Electronics Show. Microsoft also reportedly has plans for a tablet of its own.

Still, she says, the new device may break new ground in a few key areas including handling multimedia — especially music and video; reading digital books, magazines and newspapers; and gaming.

Ogg expects the new device's color screen to be smaller than a standard pad of paper.

"If it's just a really good color reader, it's not going to be worth the money," says McQuivey, of Forrester Research. Apple is in a "sweet spot" to be able to create an "ultimate media experience" that integrates music, video and still photos into an elegant device with a robust Internet connection, he adds.

Apple is reportedly in talks with HarperCollins Publishers regarding making e-books available online, according to a report in The Wall Street Journal. HarperCollins declined to comment about talks with Apple.

Not The First Time For Tablets 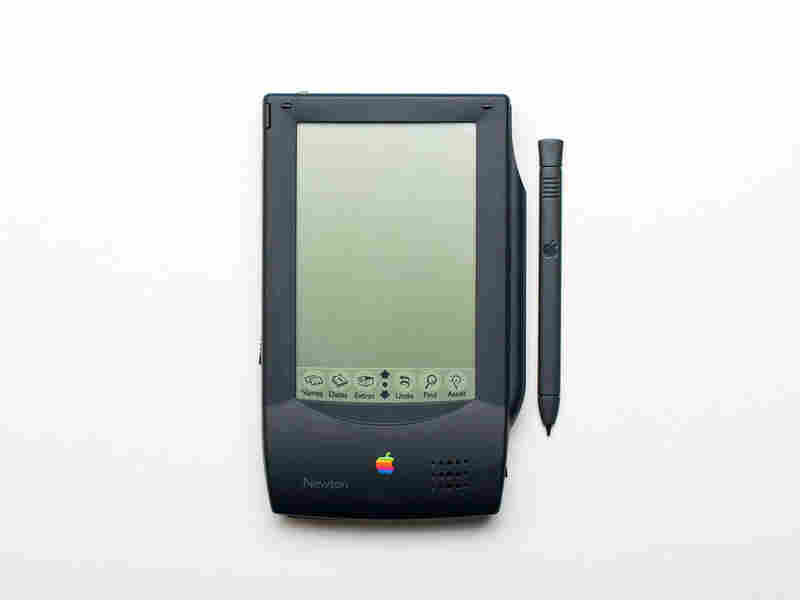 Apple's previous attempt at introducing a tablet device occurred in 1993 when it unveiled the Newton MessagePad. It was one of the first PDAs, but it had a host of problems. Apple stopped selling the Newton in 1998. Grant Hutchinson via Flickr hide caption 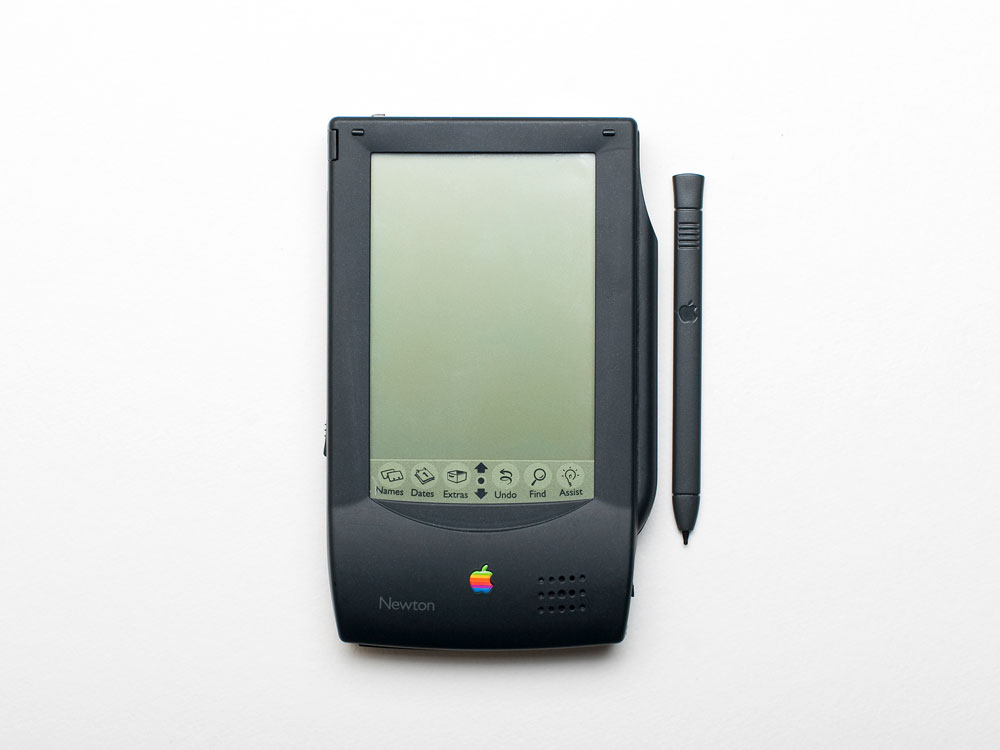 Apple's previous attempt at introducing a tablet device occurred in 1993 when it unveiled the Newton MessagePad. It was one of the first PDAs, but it had a host of problems. Apple stopped selling the Newton in 1998.

Other companies including Apple, Microsoft and Hewlett-Packard have attempted to enter the tablet market before, with limited success.

Microsoft reportedly has plans for a dual-screen tablet, but a company spokesman would not comment on the project. Earlier this month at the Consumer Electronics Show in Las Vegas, Microsoft CEO Steve Ballmer unveiled an HP slate product that HP says will be available later this year. HP's first tablet — the HP Compaq TC100 — was introduced in 2002.

Technical bugs, bulky sizes and high prices kept earlier tablets from catching on. But now that the world is increasingly wireless, computer manufacturers hope consumers and corporations will take a second look

Apple's App Store, which users of both the iPhone and iPod Touch can access, is expected to be a key part of Apple's strategy for its new device. So is the iTunes store, where Apple already sells audio books (e-books are also sold through various apps).

Regardless of its ultimate size, McQuivey says the new device has to be something that "follows you around and docks in multiple locations" such as a bedroom, kitchen and the office.

He says Apple may charge for some optional services including 3G wireless and a service that manages personal content and syncs it across devices, including the tablet, a computer and phone. But he expects that, like the iPod Touch, the new tablet will also have WiFi built in so it can be used wherever the user has access to an open wireless network.

Companies like Amazon, Barnes & Noble and Sony aren't standing still. Analysts say they're planning facelifts this year for their popular e-readers including the Kindle and the Nook. Some of the changes may include switching to color touch-screen technology and making the devices more durable.

The Consumer Electronics Association projects 5 million e-readers will be sold in 2010, up from about 2.2. million last year.

Still, McQuivey and other analysts predict that consumers will continue to do most of their e-reading on mobile phones and computers — not on these single-function devices.

Now, the big question is whether there's a market for a midsize device that's neither a laptop nor a phone.

"There's a reason why this category doesn't exist for consumers yet," says Ogg of CNET. "Nobody's really figured it out."