Accessibility links
NPR Bids Farewell To Donald Bordelon, Katrina Survivor NPR first met Donald and Colleen Bordelon when they were rebuilding their home after Hurricane Katrina. Over time, they captivated Morning Edition listeners with their wit, their honesty and their hope. Donald died last week in his rebuilt home. He was 53. 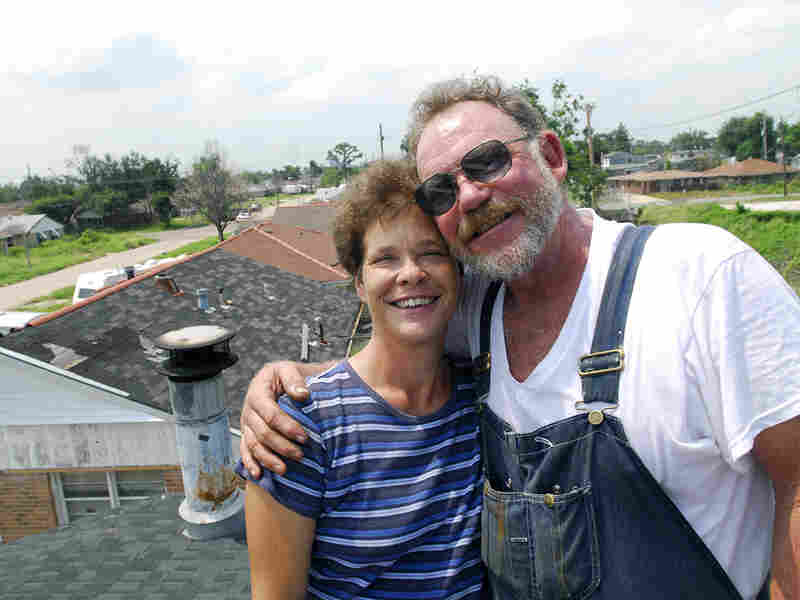 Colleen and Donald Bordelon stand on the roof of their home, August 2006. Cheryl Gerber for NPR hide caption

The first time Donald Bordelon fled a Louisiana hurricane flood, he was 8 years old, and his father had to pull him onto a rescue boat through a window. It wasn't a scary story, though, in Donald's telling. It was a story about his profound love for home.

Donald would explain how he and his mom and dad returned to their home in St. Bernard Parish, just outside New Orleans. They rebuilt what was broken. Donald grew up in that home over time. He would marry and raise his own family there. And when another hurricane pushed water past the second floor — and he was forced to flee again with his family by boat — he had another story about home.

Donald and his family returned. Again. They rebuilt. Again. Why? Because it was home.

That home was where NPR met Donald and his wife, Colleen. As we first told you in 2005, he wore overalls, and his glasses glinted in the last of the daylight. He'd just returned to work that day in a shipyard, and he had a Bud Light in hand.

And so host Steve Inskeep and Morning Edition staff members and listeners began a friendship with the Bordelons.

"How you doing, man?" was Donald's greeting. He called us "Buddy." He took us up to his roof to survey Hurricane Katrina's damage. Looking out over the devastation, he told us the birds were already returning to the neighborhood. "I was coming in today, man, they had about 15 or 20 doves landed up in a tree."

Each time we called — before Mardi Gras, on Thanksgiving, on Katrina's anniversaries — Donald and Colleen were at home. Only once did we speak with them when they were out of town. They were in Baton Rouge, forced there by Hurricane Gustav. Soon, though, they went back.

And in the end, it was home where Donald Bordelon spent his last day. He died of a massive heart attack there last week. Colleen was at his side.

And he's now buried next to his "daddy" — the man who many years ago saved Donald from a flood in their home — then taught him how to return and rebuild.

Outside New Orleans, Thanksgiving And Reconstruction Nov. 23, 2006
3 Years After Katrina, Family Preps For New Storm Sept. 1, 2008
Bordelons Have A Scare After Evacuating To Safety Sept. 3, 2008