Accessibility links
3 Bomb Blasts Hit Near Baghdad Hotels Dozens of people were killed and more than 70 wounded in coordinated suicide attacks near three hotels frequented by Westerners and foreign journalists. The explosions went off in a 15-minute span and occurred as Iraq announced that Saddam Hussein's notorious cousin "Chemical Ali" had been executed. 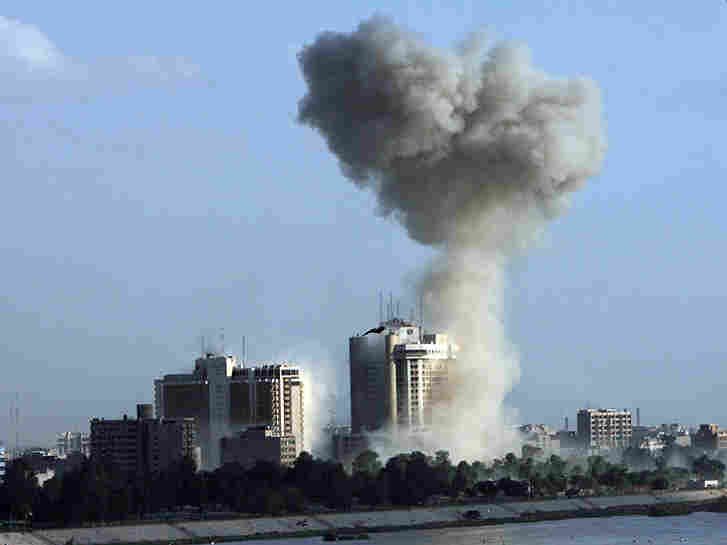 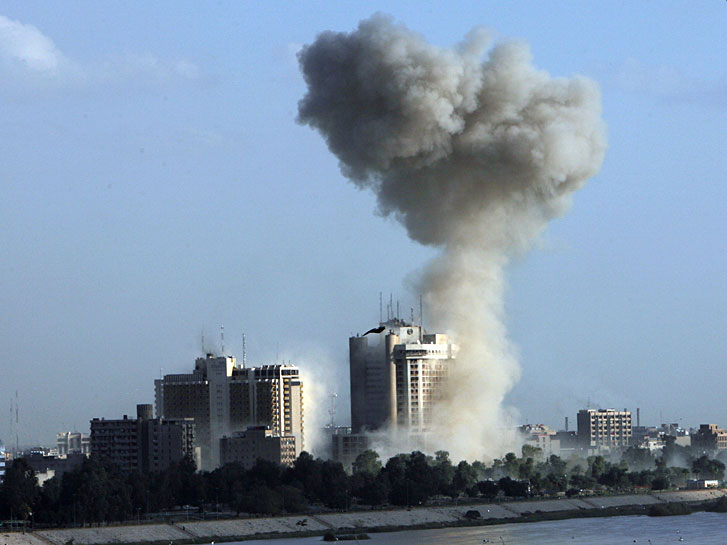 Smoke rises into the sky following one of three explosions Monday near Baghdad hotels.

Suicide bombers set off devastating explosions near three Baghdad hotels frequented by Westerners and foreign journalists, killing at least three dozen people and wounding more than 70 Monday in blasts that occurred in a 15-minute span.

The coordinated attacks came the same day that Iraq announced the execution of "Chemical Ali," Saddam Hussein's notorious cousin. Ali Hassan al-Majid was hanged about a week after he was sentenced to die for poison gas attacks that killed more than 5,000 Kurds in 1988.

Iraqi officials stopped short of declaring the blasts possible revenge for the execution.

The explosions struck the compounds of the Sheraton Hotel, the Babylon Hotel and the al-Hamra Hotel. The blast damaged NPR's Baghdad bureau, which is near the al-Hamra, but no one was injured.

The first explosion went off at about 3:40 p.m. local time in the parking lot of the Sheraton, toppling high concrete blast walls protecting the site and damaging a number of buildings along the Abu Nawas esplanade across the Tigris River from the Green Zone. Two other blasts followed minutes later, striking near the Babylon and the al-Hamra.

Wissam Mahmoud, who works for NBC, told NPR's Lourdes Garcia-Navarro that the attackers at the al-Hamra had sophisticated weapons and overwhelmed the hotel's security guards. 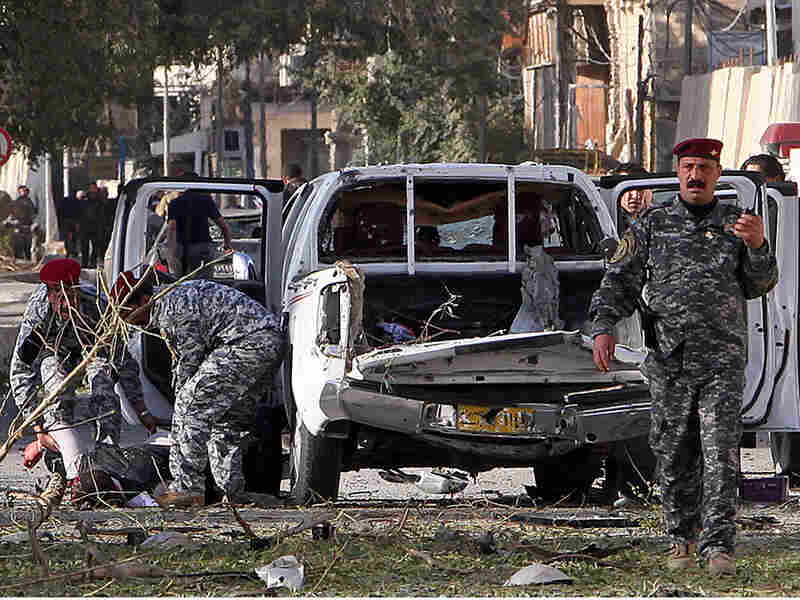 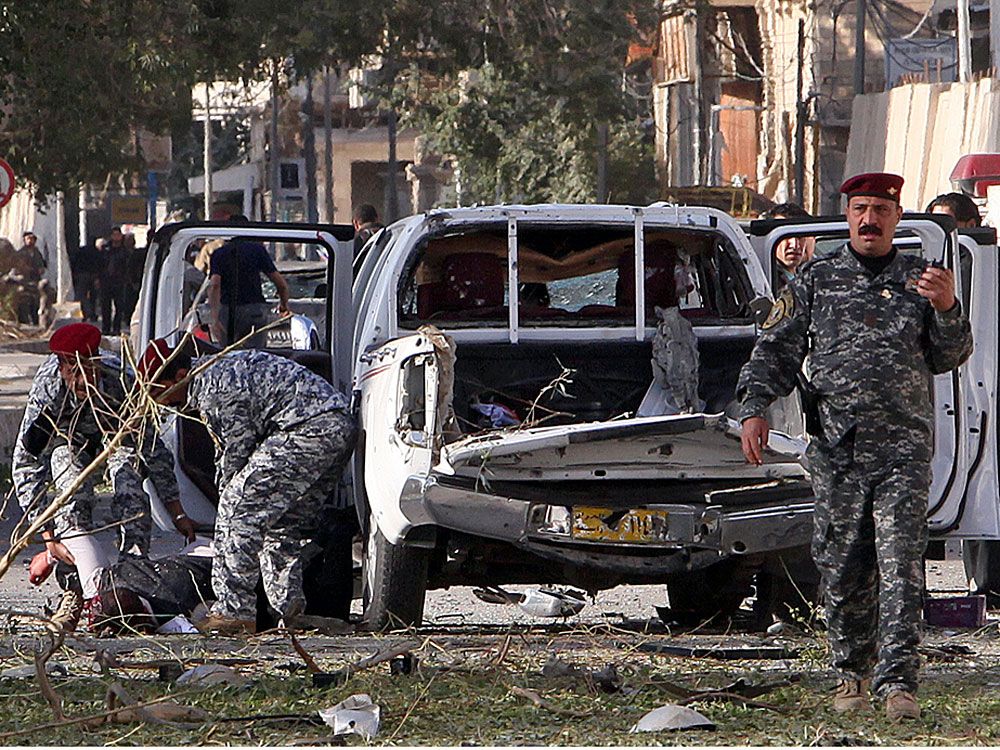 Iraqi police evacuate a victim of bomb attacks in Baghdad.

"I saw the guard shooting [at] some insurgents," Mahmoud said. "And then a minibus [drove in and] stopped there, and then [an] explosion. I don't know what happened after that."

Garcia-Navarro said the attack at the hotel compound left a crater about 15 feet deep and 30 feet wide, indicating that the vehicle was "clearly carrying a very large payload."

"It's such a scene of devastation. Mangled cars ... and bits of bodies littered around the area," she said.

Two women were found underneath the rubble, one of them covered in dust with long streaks of blood running down her face. "May god kill the government," the woman shouted.

Officials, speaking on condition of anonymity, said the death toll was expected to rise. According to initial tallies, 15 people died at the al-Hamra, 14 at the Sheraton and at least seven others at the Babylon, including two policemen.

The al-Hamra has been targeted in the past. In November 2005, suicide bombers, using a van and a water tanker packed with explosives, penetrated the building's interior, killing eight Iraqis.

There was no immediate claim of responsibility for Monday's attacks, which come about six weeks after a series of blasts killed 127 and brought an outcry against Iraq's government for repeated security lapses as U.S. troops withdraw.

"The people we've talked to are extremely upset," Garcia-Navarro said. "They blame [the latest attacks] on the Iraqi government. They say it's another example of the lack of security that exists around Iraq."

Security has become one of the main issues leading up to national parliamentary elections scheduled for March 7, and the bombings could be meant to show that the Iraqi government is not up to the task of protecting the capital.

Government spokesman Ali al-Dabbagh said the latest bombings "represent an extension" of the activities of insurgents linked to Hussein's regime. However, he did not tie Monday's attacks to Chemical Ali's execution.

Al-Majid was one of the last members of Hussein's inner circle to go on trial in Iraq.

In 1988, as the eight-year Iran-Iraq war was winding down, al-Majid led a campaign against a Kurdish rebellion in the north that killed an estimated 100,000 people — most of them civilians — in less than a year. Al-Majid later boasted about the attacks, as well as a gas attack on the Kurdish city of Halabja on March 16, 1988, that killed about 5,000 people.