Accessibility links
Economists' Rap Battle Gains Cred From Ke$ha's Nod An economist and TV producer hired a comedy duo to perform a rap song they wrote that pits the ideas of John Maynard Keynes against those of lesser known theorist F.A. Hayek. The resulting 6 1/2-minute music video tells the story of Keynes and Hayek going out for a night on the town. While drinking and rolling with their homies, they lay out the basics of their theories. 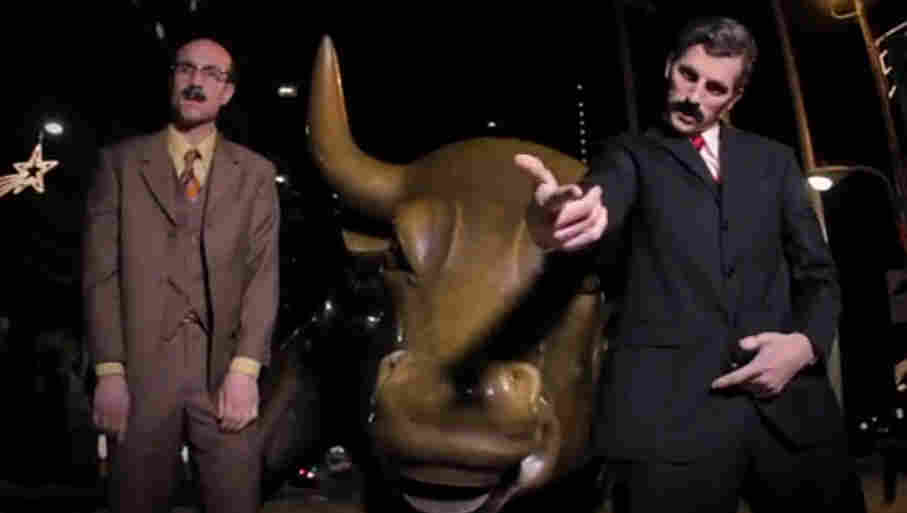 Watch The Video For 'Fear The Boom And Bust'

For The Lyrics And More

In 2007, John Papola was an executive producer at Spike TV, making promos for things like the Scream awards and the Video Game Awards, when he started becoming a bit obsessed with what was going on in the economy. He had only taken one economics class in high school, but the more he read, the more he found himself drawn to the ideas of Friedrich von Hayek, the intellectual founder of what is known today as the Austrian School of Economics.

Papola's growing interest in the influential but little-known economist eventually led him to discover libertarian economist Russell Roberts, co-author of the popular blog Cafe Hayek and host of the EconTalk podcast.

Papola agreed with a lot of what Roberts had to say and appreciated the fact that the economist wasn't afraid of talking to people whose views conflict with his own. So in 2009, he cold-called Roberts and left a "long, ranting message" about how he was interested in the business cycle and monetary policy.

"Eventually I got around to, 'I love your podcast. I'm a big fan. I really would like to work together on some kind of video project to dive into economics using visuals and entertainment value, not just lectures and graphs and [charts],' " Papola told NPR's Alex Blumberg.

At the time, the ideas of another dead but influential economist were getting a lot of attention. It seemed like everyone -- the media, politicians, even people on the street -- was talking about John Maynard Keynes, father of the modern-day stimulus package.

As Hayek fans, this didn't make Papola and Roberts too happy. They wanted to find a way to critique Keynes' theories and give Hayek the attention they thought he deserved. After throwing around several ideas, including a spoof of "Staying Alive" featuring the lyric, "I'm an econ man / I love to talk," Roberts suggested a rap song.

Neither Roberts nor Papola had ever written a rap song. In fact, Papola wasn't even sure Roberts had actually heard one. But they quickly got to work writing rhythms and enlisted the help of the comedy rap duo Billy and Adam to perform the song. The resulting 6 1/2-minute music video tells the story of Keynes and Hayek going out for a night on the town. While drinking and rolling with their homies, they lay out the basics of their theories.

We've been going back and forth for a century
[Keynes] I want to steer markets,
[Hayek] I want them set free
There's a boom and bust cycle, and good reason to fear it
[Hayek] Blame low interest rates.
[Keynes] No ... it's the animal spirits

The music video may not be ready for the MTV crowd just yet, but thanks to a chance encounter with pop star Ke$ha at the NPR studio in New York, it now has some street cred.

"It's like legit. It's really good rapping," Ke$ha told Blumberg.

For Roberts and Papola, that was the ultimate seal of approval.