Accessibility links
Haitians Find Lifeline In Local Radio Station Signal FM 90.5 has been on the air around the clock since the earthquake struck Jan. 12. The station has become a community bulletin board for missing person reports, rescues, body collection, survival tips and solace. 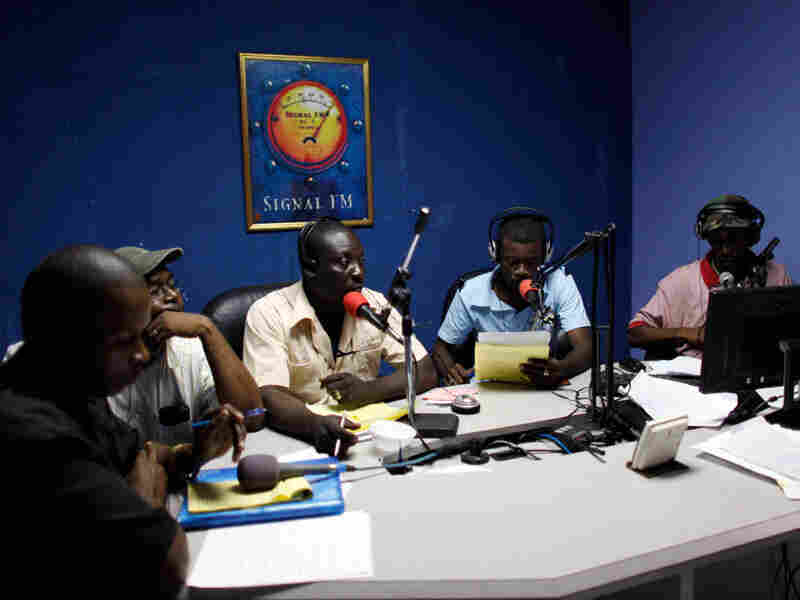 Journalists broadcast from the studio of Signal FM 90.5 in the Port-au-Prince suburb of Petionville last week. Signal FM is the only radio station in the city that has broadcast nonstop since the Jan. 12 earthquake. Ariana Cubillos/AP hide caption 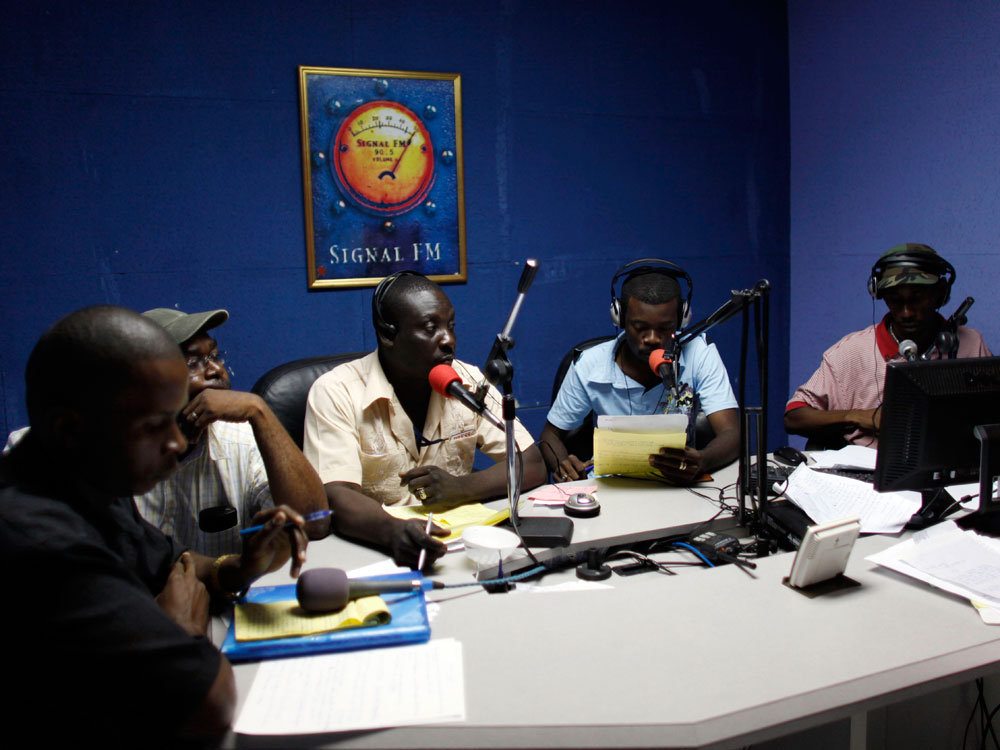 Journalists broadcast from the studio of Signal FM 90.5 in the Port-au-Prince suburb of Petionville last week. Signal FM is the only radio station in the city that has broadcast nonstop since the Jan. 12 earthquake.

From the moment the earthquake struck in Haiti, one radio station has been on the air around the clock acting as a lifeline for Haitians in Port-au-Prince and around the world on the Internet. Signal FM 90.5 has evolved into a community bulletin board for missing person reports, rescues, body collection, survival tips and solace.

Mario Viau, who started the station 18 years ago, has become somewhat of a hero over the past two weeks. Graffiti on the wall outside the station in the Port-au-Prince suburb of Petionville reads: "Viv Mario" ("Long live Mario").

"We were just like the phone; we were the phone of the country," says the 52-year-old owner and general manager. "There were people on one side and people on the other side, and we were just the instrument in the middle that was saying exactly what was going on in Haiti."

When the quake struck at 4:53 p.m. on Jan. 12, Signal FM was playing "Hotel California." The Earth groaned and the building shuddered, but just before the DJ ran out, he had the presence of mind to hit the "repeat" button.

So for the first 30 minutes of Port-au-Prince's descent into hell, the only thing you could hear on the radio was the Eagles' standard — over and over and over.

The DJ who was on the air at that moment, Jean Gary Apollon, considers it a miracle that the building held together and the antenna — located on a hilltop five miles away — never toppled.

"All the other radio stations were knocked off the air," he says. "We had the luck to keep broadcasting. God gave us the ability to stay on the air for the Haitian people and the whole world."

A Voice For Survivors

With all the capital's newspapers and TV stations down, Signal FM was all there was. Frantic listeners trekked to the station seeking news of lost loved ones.

Viau says the station put one woman on the air who said her husband was alive under the ruins of a bank building and begged rescuers to search for him. They looked to no avail, and the husband was presumed dead. But the woman returned to the station, and staff again gave her the microphone. She said, "My husband is alive in the bank. Please, please go and dig him out."

"And eight days after, she came here with her husband," Viau says. "That guy gave me a hug that I will never forget. That guy almost choked me to death, he was holding me, so happy, telling me, 'Thank you, thank you, thank you so much.' "

As the days went on, Signal FM told Haitians how to begin to handle the catastrophe. Doctors, engineers, seismologists and clergymen went on the air. They told people what to do with dead bodies, where it was safe to sleep, what to do about natural gas leaks, where they could locate medicine and food, and where to find God amid the agony.

For the time being, the station has changed its format from entertainment to information. When the station does play music, Viau says, the staff tries to play music that's appropriate. 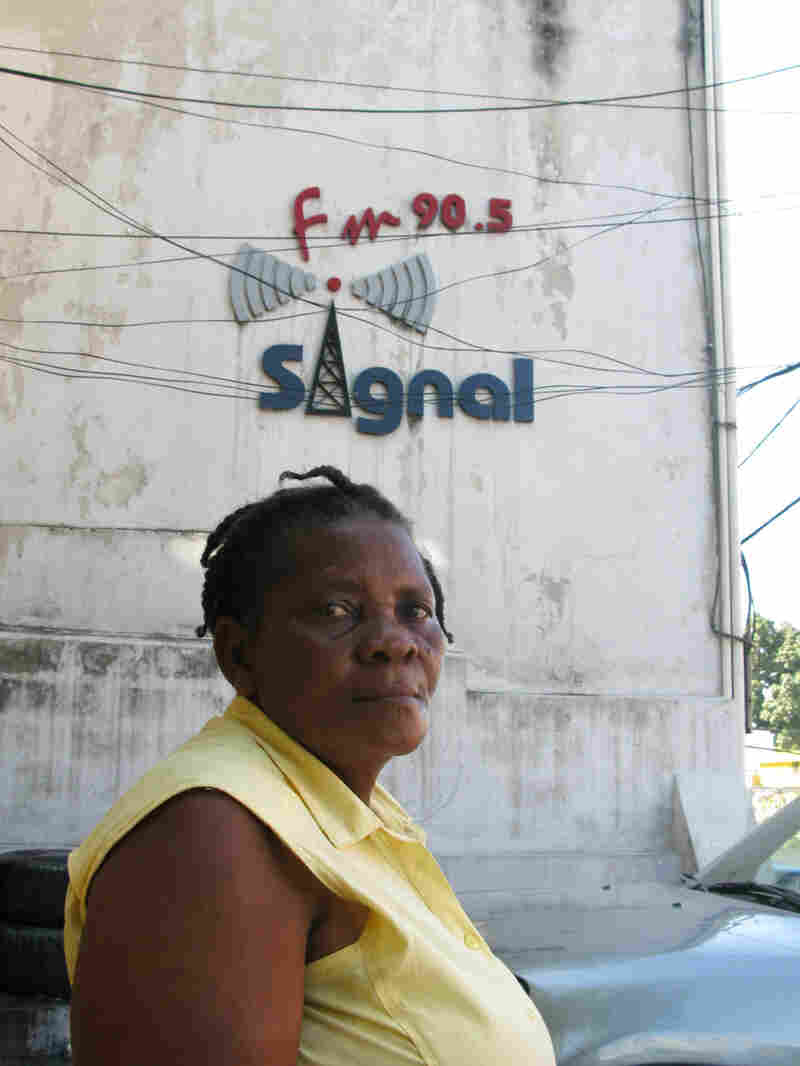 Andrea Ansenne came to Signal FM looking for her niece. She says the radio station has helped her reunite with four relatives since the quake struck. John Burnett/NPR hide caption 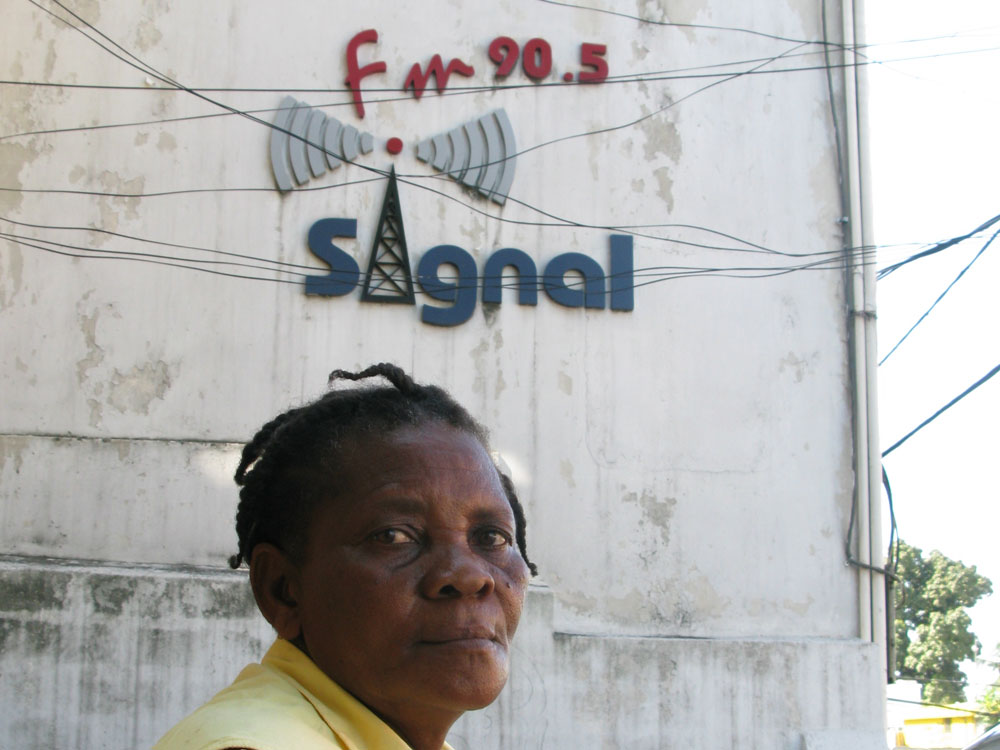 Andrea Ansenne came to Signal FM looking for her niece. She says the radio station has helped her reunite with four relatives since the quake struck.

Today, Signal FM's staff of 23 reporters and announcers — with even more in the provinces — is the largest corps of journalists in Haiti. Many of them have lost their homes, and some have family members who have died. But they're on the air, day and night, telling Haitians what's happening in their calamitous nation.

Outside the station, people are still coming to hand messages to the guard at the door, who passes them to the announcers.

"This radio station is really important because it's the first one that gave us the news. I don't know what we would do without it," says Andrea Ansenne. "I came here for my niece to see if she's still alive. I would like to hear from her."

With tens of thousands dead in the capital, does she really believe Signal FM can help her find her niece?

"I came here earlier with the names of four relatives, and they appeared," Ansenne says. "So here I am again."