Accessibility links
The Future Of Coal Power Will Require Hard Choices As China and the United States promise emissions cuts, coal consumption takes center stage. By Monday, as many as two dozen countries will have listed their emissions targets. Experts say countries need to weigh the costs and benefits of continuing to use a technology that produces the largest amount of greenhouse gases. 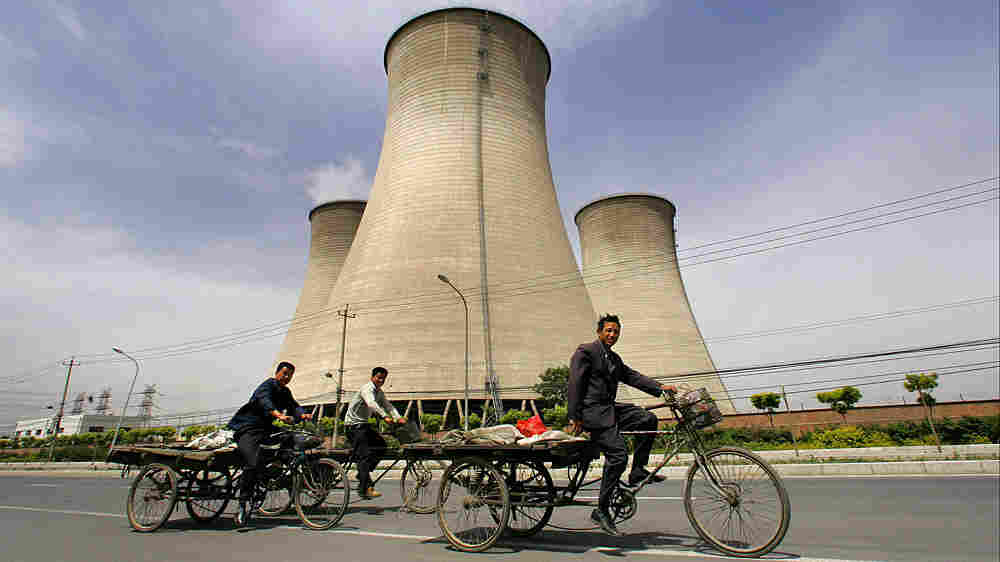 Workers ride past cooling towers at a coal-fired power plant on the outskirts of Beijing. Such power plants are at the center of a debate about the future of energy production in China and the U.S. Frederic J. Brown/AFP/Getty Images hide caption

Next Monday, governments of some of the world's biggest emitters of greenhouse gases are scheduled to announce how much they'll limit the emissions that warm the planet. That's the deal they made at the Copenhagen climate conference in December.

No matter what cuts they promise, they'll all have to take a long, hard look at how much coal they use.

It used to be that coal was king in the U.S. But now, coal is guo wang — that's "king" in Chinese.

"Coal is 80 percent of all power generation in China," says Richard Morse, an energy analyst at Stanford University. "And the Chinese use of coal is really one of the largest drivers of global coal consumption and, hence, global emissions."

The Top Source Of Greenhouse Gases

Coal is the biggest single source of greenhouse gases. China and India are now huge consumers of coal, and their appetite is growing. "As long as economic development is a priority," says Morse, "I think climate takes a back seat, and in that situation, coal is going to win every time."

That's the conventional wisdom. But the deal made in Copenhagen may change all that. By Monday, as many as two dozen countries will have listed their emissions targets. China and the U.S. — the two biggest coal users — are leading the group. India is expected to join them, and so will South Africa — a major coal exporter.

So it's governments whose economies depend on coal who are now driving climate diplomacy by saying that they'll cut their greenhouse gas emissions.

China Could Benefit From Alternative Fuels

One energy expert who's watched this unfold is Trevor Houser, with the research firm RHG in New York. Houser advised the U.S. climate team in Copenhagen. He says China actually might like to get off the coal train.

"The coal in China is mined primarily in the northwest of the country, but the demand for that coal is in the east, and getting that coal from the mine to the power plant on the coast is a challenging and expensive undertaking," Houser says.

Two years ago, an epic snowstorm shut down that supply chain. Power went out for millions of Chinese. Even China's trains stood still, stranding tens of thousands of people — and a lot of coal.

Houser says it's the lack of a reliable and cheap way to transport coal that is pushing China to look for alternatives fuels.

As for the other big consumer of coal — the U.S. — the Obama administration has pledged to encourage more green energy from things like wind and solar power, and to subsidize more efficient use of energy. But as energy economist Henry Jacoby of MIT points out, displacing coal is politically risky.

"There are something like 22 states in the U.S. that have some level of coal production," Jacoby says. "And, of course, that's not all the states that care about it, because there are a number of other states whose electric power systems are heavily dependent on coal."

Jacoby points out something that politicians are loath to admit: Switching away from coal, which is cheap so long as its negative environmental effects aren't counted, will cost some consumers more on their utility bills.

But the Obama administration thinks there's an answer: clean coal. That means extracting hydrogen and carbon monoxide from the coal to make syngas, a fuel that can be used to make electricity without emitting carbon dioxide into the atmosphere. The Department of Energy is spending $404 million this fiscal year to figure out how to do that. The Chinese government is also investing in the technology.

So, if coal does remain a big part of the energy mix for a few decades more, it may be by virtue of a new, untested technology whose final cost can only be guessed at.