Accessibility links
Remembering Aaron's Quiet, Courageous Chase The pressures faced by Hank Aaron as he became baseball's all-time home-run king are different than those Barry Bonds confronts as he chases Aaron. Aaron quietly dealt with death threats and a barrage of racist mail before and after he passed Babe Ruth in 1974. 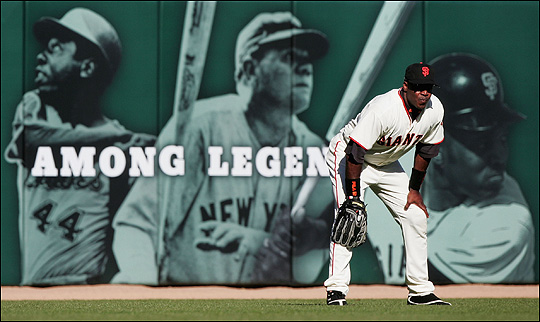 Barry Bonds stands in the shadow of Aaron, Babe Ruth and Willie Mays as he pursues the home run record. 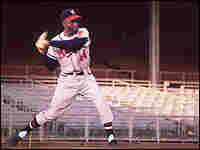 Henry Aaron swings a bat in an empty stadium, circa 1955 — two decades before he would pass Babe Ruth as the all-time home-run leader. Hulton Archive/Getty Images hide caption 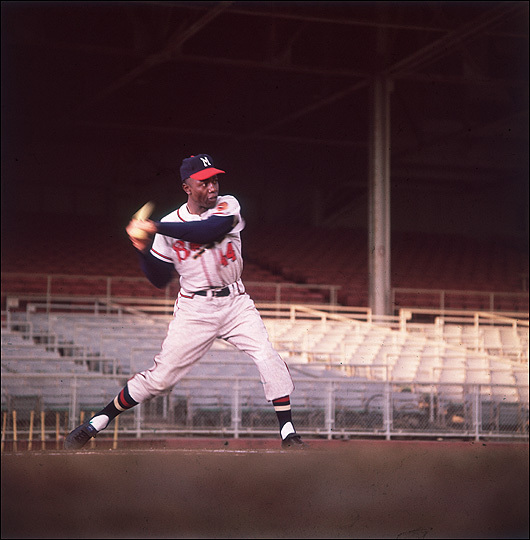 Henry Aaron swings a bat in an empty stadium, circa 1955 — two decades before he would pass Babe Ruth as the all-time home-run leader.

Hank Aaron was up next. It was April 8, 1974, and the man nicknamed Hammerin' Hank was about to bat for a second time that night against the Los Angeles Dodgers. His career home run total stood at 714... tied with Babe Ruth.

Up in the broadcast booth at Atlanta Stadium, NBC Sportscaster Curt Gowdy and his colleagues watched as the fans began to rise up out of their seats.

"... and another standing ovation, number five, Joe, for him," Gowdy remarked to his broadcast partner, Joe Garagiola. "He's gonna set all kinds of records tonight ... fantastic. Tell ya, you gotta feel the excitement ..."

A record crowd of nearly 54,000 certainly felt it. Fans held signs reading "Slam It, Hank." The stands were draped in bunting.

Aaron's Atlanta Braves teammate and good friend, Dusty Baker, felt the buzz. But he also sensed something else, when Aaron turned to him before heading to the plate.

Baker knew that if Aaron had gotten as much love before this night, maybe he wouldn't have been so "tired of this."

"Y'know it wasn't a very happy time," Baker says. "It wasn't nearly as happy as it should've been."

Even as radio stations pumped out a cheery ode to Aaron, called "Move Over, Babe," the home run pursuit was fraying around the edges.

Aaron was hailed on the road, but Braves' home crowds in 1973 were so small, it prompted headlines around the nation, such as "Aaron Playing in Relative Secrecy."

Some say it was because the team wasn't winning; others believe it was a southern response to a black man challenging the legend of a white sports icon.

The hate letters were proof of a racial backlash. One read: "You are not going to break this record established by the great Babe Ruth if I can help it. Whites are far more superior than jungle bunnies. My gun is watching your every black move."

Some of the threats were specific enough to prompt FBI protection for Aaron's family. Aaron had a bodyguard, but as a public figure there were plenty of times when he was exposed.

In the dugout during one game, Dusty Baker says he and teammate Ralph Garr ignored Aaron's warning to stay away.

"I remember one day he told us not to sit by him, 'cause somebody was gonna shoot him that day," Baker says. "We were like, 'Oh, Hank, we're down with you man.' Y'know, and me and Ralph were lookin' the whole time and he wasn't even — he wasn't lookin,' acting like he wasn't afraid at all."

Aaron revealed little about the threats and taunts, even to his closest teammates.

"Hank was kind of like your Dad," says Baker, "who goes to work and you know work's not always rosy, but Dad never tells you about it."

Still, Aaron was not afraid to talk to the many reporters who flocked to him about the racial aspects of his quest.

"I suppose if it was a Roger Maris or Mickey Mantle or Harmon Killebrew or one of the white players probably going for this record, it wouldn't be much as far as ... them talking about whether they want Babe Ruth's record broken or not," he said at the time.

In the end, they had no choice. Aaron's talent, consistency and powerful wrists drove him inexorably toward Ruth's record.

And by then, most fans, even from Atlanta, were on board. A poll from the time showed 77 percent wanted Aaron to pass the Babe.

"Aaron in his earlier days used to hit more to right, right center than to left ..." Gowdy continued.

And then, suddenly, the crack of the bat:

He would hit 40 more in his career to set the mark of 755, which Barry Bonds will soon break. Bonds will have the number, but the ambivalence surrounding his pursuit may ensure that Aaron retains the status he achieved, finally, on that April 8 evening.

There are no "Move Over, Hank" songs on the radio — 755 may live on as baseball's true mark of power and dignity.

The Unforgivable Blackness of Barry Bonds