Accessibility links
In Okinawa, Elections Renew Debate Over U.S. Bases The U.S.-Japan alliance is showing strains again over American military bases on Japanese soil. Most of the bases are on the southern island of Okinawa. Voters in one town there have put pressure on Tokyo and Washington by electing a mayor who opposes a proposed base. 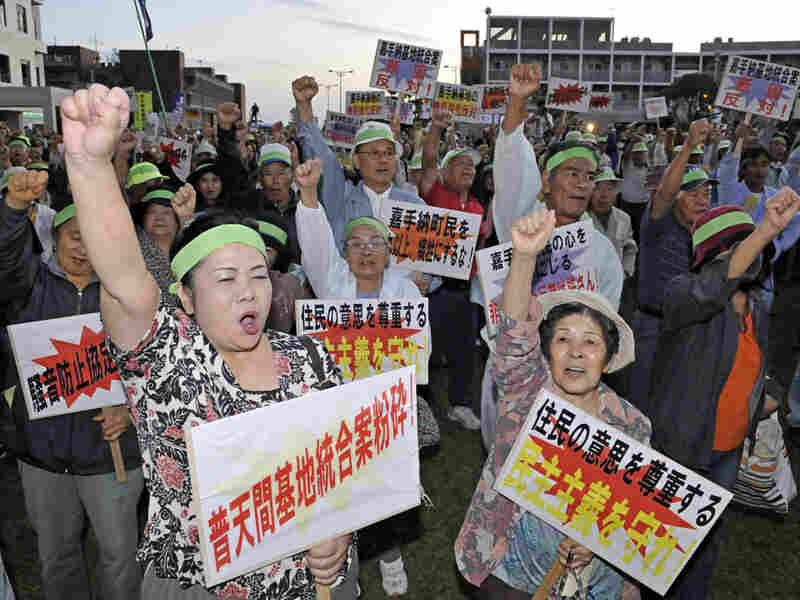 Local residents protest against a U.S. military base in Kadena on Japan's Okinawa island, Nov. 5, 2009. Most U.S. bases in Japan are on the southern island and have been the source of tensions for decades. Kazuhiro Nogi/AFP/Getty Images hide caption 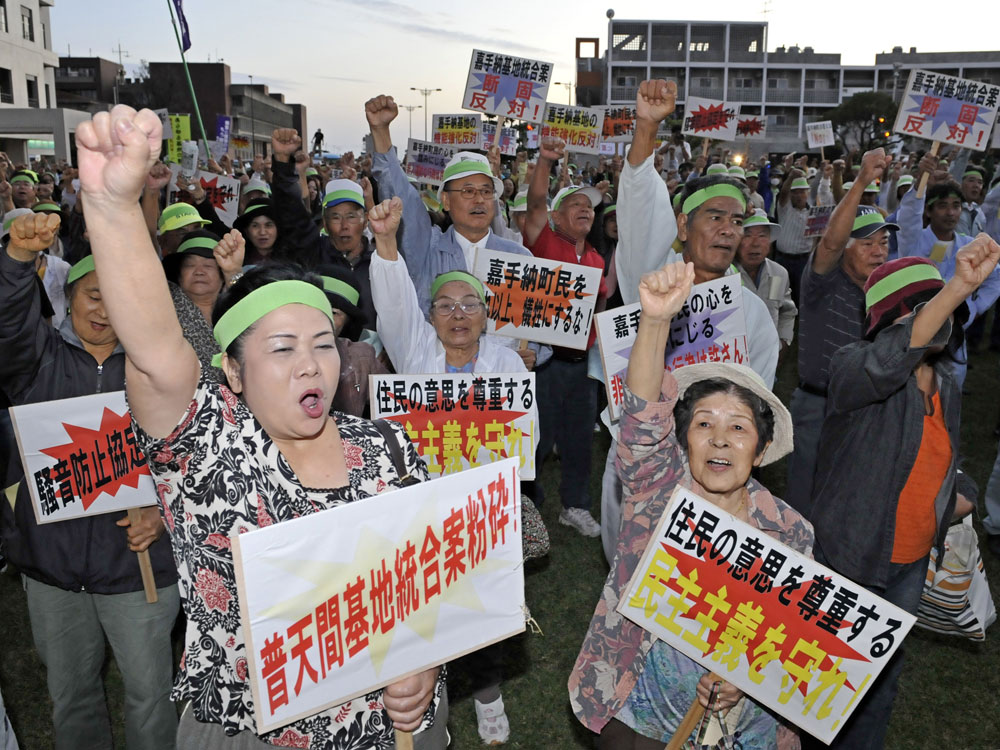 Local residents protest against a U.S. military base in Kadena on Japan's Okinawa island, Nov. 5, 2009. Most U.S. bases in Japan are on the southern island and have been the source of tensions for decades.

The U.S.-Japan alliance is showing strains once again over the issue of American military bases on Japanese soil. Most of the bases are on the southern island of Okinawa.

On Sunday, voters in the small town of Nago challenged the policies of the U.S. and Japan by electing Susumu Inamine as mayor in a race that hinged on the location of an American air base.

In 2006, Tokyo and Washington agreed to relocate U.S. Marine Corps Air Station Futenma to Nago from the crowded southern city of Ginowan.

Inamine opposes the relocation and says that is why voters picked him over the incumbent.

"Seventy-five percent of U.S military bases in Japan are on Okinawa," says Inamine, a former civil servant. "Moving a base within Okinawa is unreasonable. Right now, people are discussing reducing armed forces and bases. Relocating doesn't make sense when we should be reducing."

Japanese Prime Minister Yukio Hatoyama said Monday that he would reconsider the relocation plan in light of Inamine's win and resolve the issue by May as promised. Before becoming prime minister, Hatoyama had said he wanted to relocate the base out of Okinawa or out of Japan.

Washington is loath to admit that local politics could derail national policies. But officials are apparently aware that the relocation could be delayed for some time. Earlier this month, U.S. Assistant Secretary of State Kurt Campbell insisted that the relocation should go ahead.

"But at the same time," he added, "we do not wish to appear intransigent, and indeed, we've tried to be very clear that our door is open for dialogue and discussions on a whole host of matters." 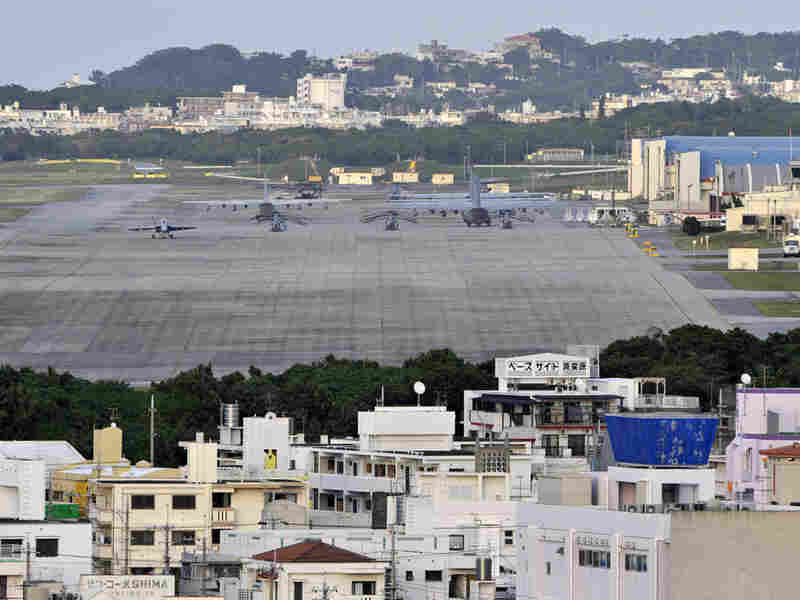 Voters in the small Okinawan town of Nago have elected a mayor who opposes the relocation of the U.S. Marine Corps Air Station Futenma (shown here in November 2009) from Ginowan, Okinawa Prefecture, to Nago. Kazuhiro Nogi/AFP/Getty Images hide caption 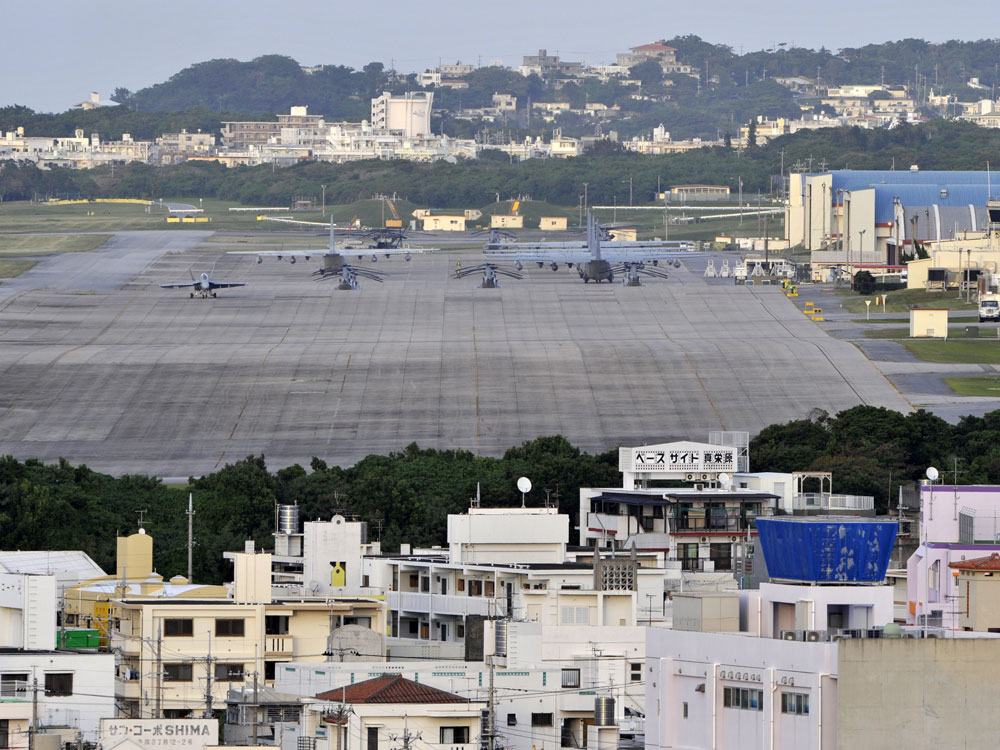 Voters in the small Okinawan town of Nago have elected a mayor who opposes the relocation of the U.S. Marine Corps Air Station Futenma (shown here in November 2009) from Ginowan, Okinawa Prefecture, to Nago.

Inamine's win was welcomed in Nago's Henoko district. The new air base would be built on reclaimed land there, where sea turtles and marine mammals called dugongs now swim around coral reefs in turquoise blue waters.

Sakai Toyama is one of a band of residents who have maintained a beachside vigil for more than eight years, just to make sure construction on the base doesn't start while no one is looking.

"I'm worried about two things," he says. "One is that the bases are close to residential areas, and I'm afraid of a plane crash and loud noise. The other is that it could damage nature here."

The deafening roar of U.S. Air Force fighter jets is a fact of life for residents near the Kadena Air Base in southern Okinawa. Bombers took off from Kadena for missions during the Korean and Vietnam wars. More recently, they have been used to launch missions to collect signals intelligence from China.

Local anger at the U.S. military presence has occasionally exploded into protest, such as during a 1995 rape case when two U.S. Marines and a sailor were accused of abducting and sexually assaulting a 12-year-old Okinawan girl. The American servicemen were handed over to Japanese law enforcement officials. They pleaded guilty to charges of rape and conspiracy and served time in Japanese prisons.

U.S. troops have a degree of extraterritoriality: U.S. authorities may hand them over to Japanese police, but Japanese police cannot enter bases to arrest them.

The former governor of Okinawa, Masahide Ota, warns that if locals are killed in accidents or incidents involving U.S. troops, it could undermine the U.S.-Japan alliance.

"We would say that the U.S.-Japan alliance has been maintained at the sacrifice of the Okinawan people," he says.

For The Greater Good?

As a high school student in 1945, Ota witnessed the Battle of Okinawa, in which nearly one-third of the island's population perished. Today, he runs a peace center with the aim of ridding Okinawa of U.S. military bases.

Ota says that most Japanese actually want the bases — just not in their backyard on the Japanese mainland. Okinawans would fight for a better deal in the legislature, Ota says, but they have only nine representatives, out of 732. This is part of a legacy of discrimination against Okinawans that he says dates back to the Meiji era in the late 19th and early 20th centuries.

The U.S. administered Okinawa from 1945 to 1972. During that time, Ota says, U.S. and Japanese officials showered supporters of the military bases with money and pork barrel construction projects.

Previous mayors in Nago have supported the bases, saying it's both in the national interest and good for the local economy.

Yasunari Yamashiro, a retired cement company manager, is an adviser to Yoshikazu Shimabukuro, the former mayor of Nago who lost in Sunday's election.

"Look at Nago, it's so rural," Yamashiro says. "Jobs are few and incomes are low. Young folks all move to the cities and never come back. We are increasingly isolated. Our former mayors have always tried to develop this small city, which is why I support the incumbent."

These debates are likely to continue throughout the year as Okinawan citizens go to the polls to elect several mayors and a new governor.