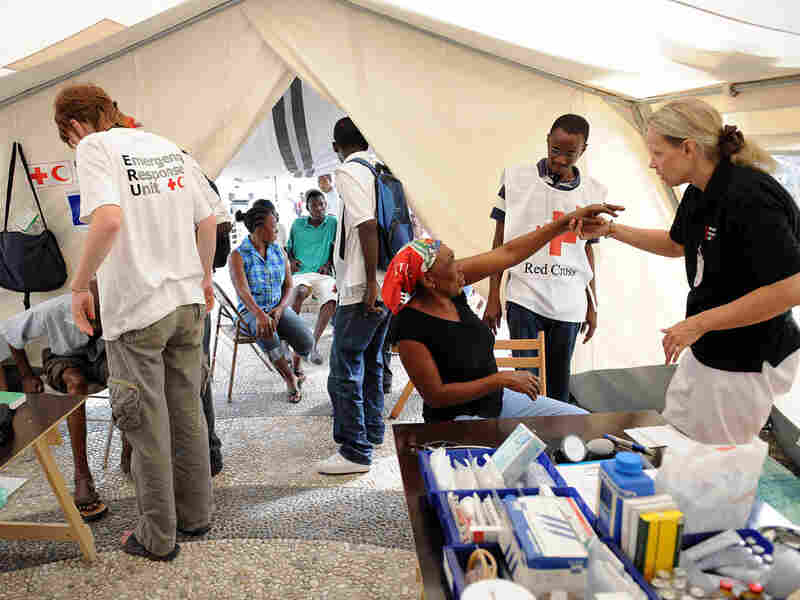 A new approach for the mental health community, "psychological first aid," takes a more practical, social work stance when dealing with disaster survivors. "You can't find your son? Well, this is who you need to talk to at the Red Cross to find your son." Stan Honda/AFP/Getty Images hide caption 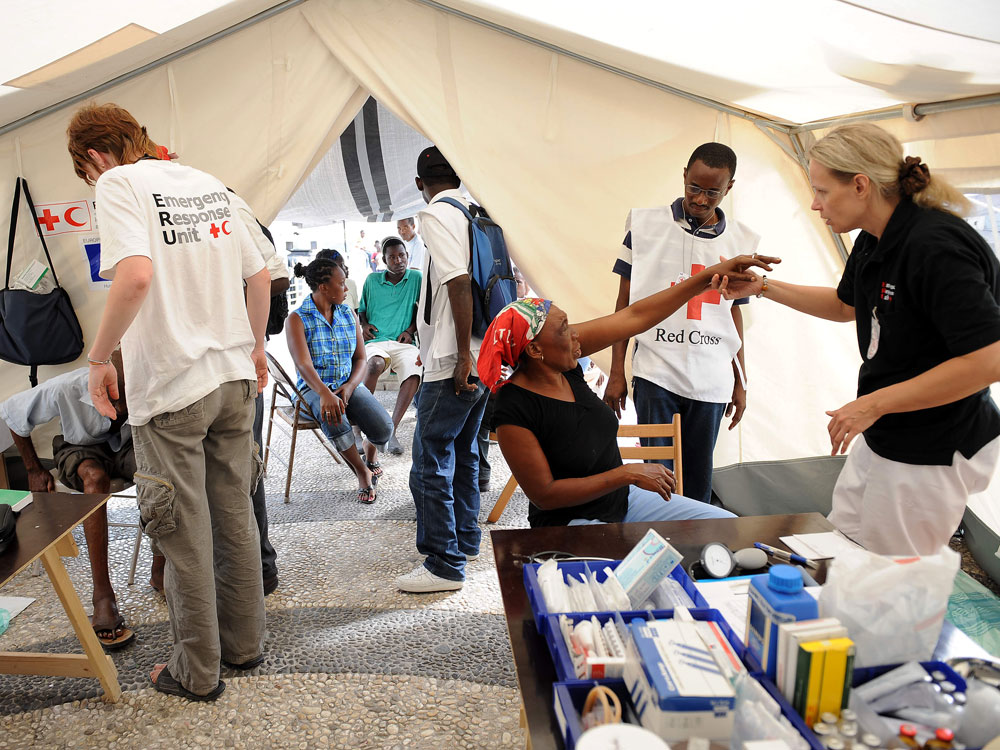 A new approach for the mental health community, "psychological first aid," takes a more practical, social work stance when dealing with disaster survivors. "You can't find your son? Well, this is who you need to talk to at the Red Cross to find your son."

They came after the Oklahoma City bombing, and flooded Sri Lanka in the wake of the South Asian tsunami. They came in droves to New York after 9/11. And according to Richard Mollica, a professor at Harvard who's spent his life researching mental health responses to natural and man-made disasters, mental health professionals will soon come to Haiti as well.

All will come with the best of intentions, says Mollica, but the work of a mental health professional in the aftermath of a major disaster like Haiti's isn't always clear. The science of how to treat psychological trauma is still very much evolving.

"Mental health has had a hard time figuring out how to fit in with the medical response," says Mollica. Apparently while mending a broken leg is a straight forward process, mending a broken heart is much more fraught.

The History Of Psychological Response To Disaster

It's only relatively recently that mental health professionals have started to show up en mass in the wake of a major disaster, says Sandro Galea, former director of the Center for Global Health. "The big shift came after the Vietnam war," he says.

When soldiers came home from Vietnam clearly shaken by their experiences in battle, American psychiatry finally came up with a formal definition of Post Traumatic Stress Disorder (PTSD), this idea that experiencing a traumatic event will emotionally devastate some portion of the people exposed to the trauma.

Once that definition was firmly established, Galea says, the mental health community became activated. In fact in the decades since Vietnam, trauma has become an extremely popular area of study and work. "The scientific and therapeutic community really coalesced around providing services for people who are experiencing traumatic events," he says.

Unfortunately, though they had a clear definition, initially the mental health community didn't have much clarity at all about what should be done to either prevent or relieve PTSD. And so there has been a tremendous amount of experimentation, not all of it equally successful.

One big idea that became popular in the 1980s and 90s, was "debriefing." Therapists were taught that within days, or even hours, of a traumatic event, professionals should arrive on the scene and encourage victims of a trauma to talk in a very detailed way about what had happened to them. Carefully people were walked through each minute of the horror and asked to describe how they felt about it.

"I think it was a pretty common sense idea that if you're in a tragic overwhelming, life experience, that, at the time of the tragedy, sharing that story with people and going through it point by point by point... would sort of discharge any emotional upset that you might stir up," says Mollica. Therapists reasoned that, after doing this, the trauma would not, "come back to haunt you six months from now," he says.

And so, after Okalahoma City, after 9/11, and, to a certain extent, even after Katrina, mental health professionals rushed in to help. They sat with victims coaching them through these very painful sessions.

But Galea says that over the years research on this practice started to trickle in. Finally, in 1997, two big research studies reviewed all the evidence and came to a clear conclusion about debriefing. "The body of evidence suggests that it actually might harm people and that people who actually do undergo debriefing probably do worse in the long term and in the short term," he says.

Galea and Mollica agree that this doesn't mean it's always harmful to discuss your experience. The problem, they say, is that in the immediate aftermath of a trauma, people are so emotionally volatile that it's difficult for them to control their emotions after they are aroused in this way. Mental health professionals, then, shouldn't push them to talk. Discussions like that are better left until months later, when there's time to teach people who have been traumatized how to master or counter their feelings.

These days, the new approach of the mental health community is something called "psychological first aid," Mollica says.

"It's kind of the bible, now, of how to approach survivors now in the acute phase," he says.

By clearing a path for people in this way, Mollica believes therapists reduce the stress on victims, which ultimately helps them avoid more serious psychological repercussions down the road.

And there will doubtless be serious psychological repercussions down the road for many of the adults and children now living open and exposed in the ruins of Haiti.