Accessibility links
Expansion Of Islamic School In Virginia Met With Protests A Northern Virginia community had to decide whether to let a Saudi-funded Islamic school expand to serve more kids. The debate turned to the curriculum at the Islamic Saudi Academy and draws attention to the still-tenuous relationships between Muslims and non-Muslims in America.

In Northern Virginia, a private school needed the local county's approval to expand to serve more students. This would have hardly raised an eyebrow had it not been for one particular detail: The school is Islamic, funded by the government of Saudi Arabia.

The Islamic Saudi Academy, located in Fairfax County, has long been under the microscope of its opponents. But for residents along the two-lane country road where the school sits, the debate was transformed from a local land-use issue into a heated discussion about the school, its teachings and the relationships between Muslims and non-Muslims in the United States.

I submit no Catholic textbook has anything near the venom and demonstrated incitement to murder as these Saudi textbooks.

For people like Pat Herrity, supervisor of Springfield District, where the school is located, this should only ever have been about traffic.

"I can't imagine putting another car every six seconds on Popes Head Road," he says, standing in the ISA's driveway counting the cars as they drive by. In August last year the county's Board of Supervisors approved the ISA's bid to expand its campus and double the number of students who attend, to around 500.

Herrity says that will just clog up the traffic on this road. The driveway he's standing in is the academy's only entry and exit point. Students who drive to school will turn into the driveway, up the hill and past the security guard to the school. Herrity says the additional traffic will make a small road seem even smaller and delay everyone. He says he voted against the bid. This is his area and the people who live here are his constituents.

People like Beth Parker, who lives next door. She was driving by the school and pulled over after spotting Herrity. She's mad that politics got in the way of what she says was strictly a land-use issue.

But scratch the surface and it's clear that there's more to the issue than traffic. And that was clear when the board met to discuss the academy's application for expansion. People lined up for hours to speak at public hearings. Speakers would first bring up traffic issues or other logistical matters, then invariably turn the talk toward religion.

One man at the public hearings, John Cosgrove, began his speaking time asking about the septic system at the campus. He ended it with an attack on the content of the school's textbooks. 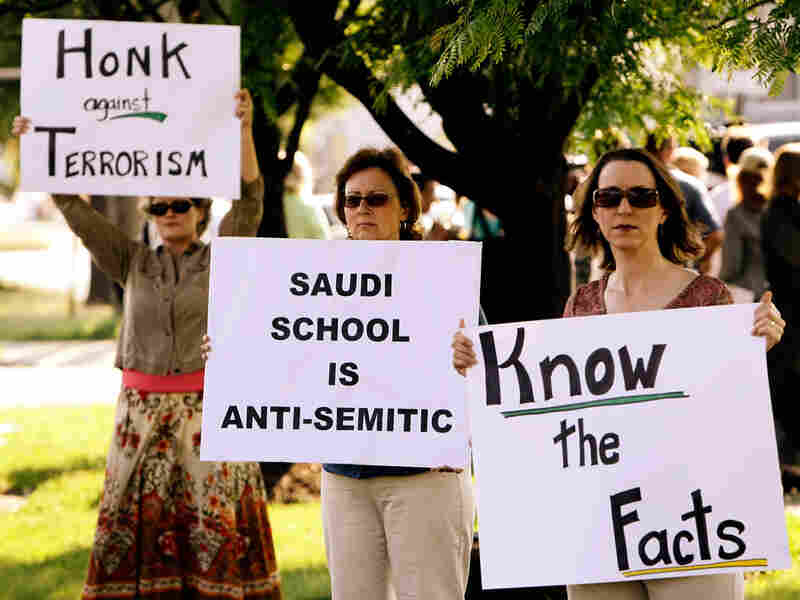 The most recent debate regarding the Islamic Saudi Academy isn't the first. In 2008, members of the Traditional Values Coalition held a demonstration outside the Alexandria, Va., campus of the ISA after the U.S. Commission on International Religious Freedom asked the State Department to secure the release of all Arabic language textbooks used at the school. Win McNamee/Getty Images hide caption 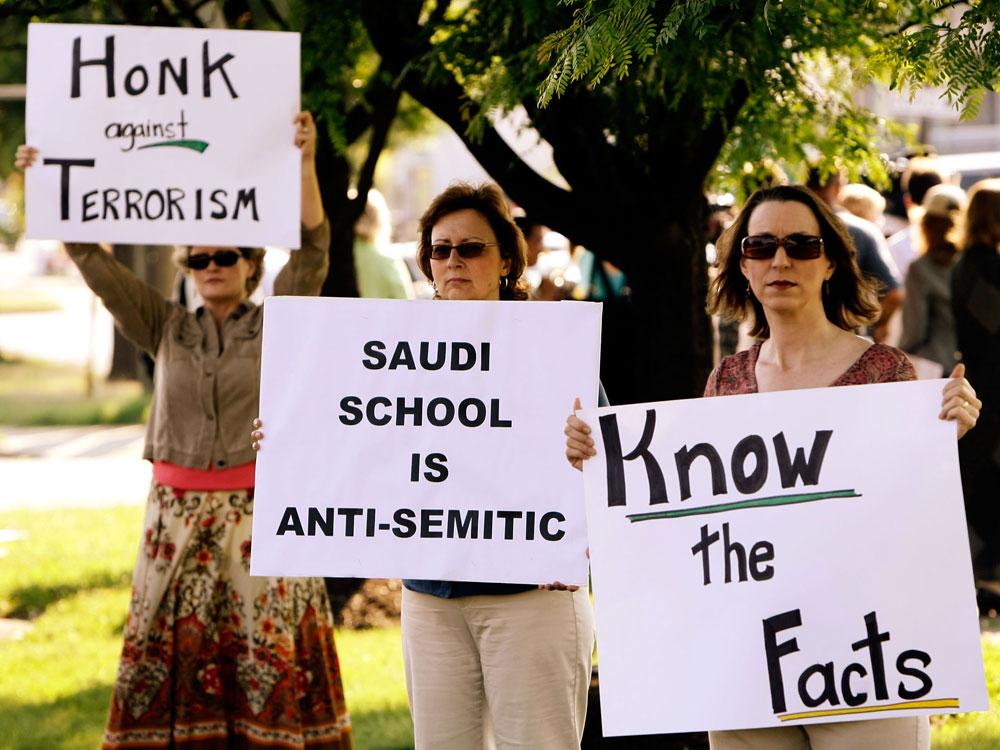 The most recent debate regarding the Islamic Saudi Academy isn't the first. In 2008, members of the Traditional Values Coalition held a demonstration outside the Alexandria, Va., campus of the ISA after the U.S. Commission on International Religious Freedom asked the State Department to secure the release of all Arabic language textbooks used at the school.

"I submit no Catholic textbook has anything near the venom and demonstrated incitement to murder as these Saudi textbooks," Cosgrove said, "and rather than rushing to congratulate them on what they've removed, ask them what it was doing there for 20 years in the first place?"

People traveled from other states to speak at the hearings. Conservative Christian groups got involved. And parents who send their kids to the school went on the defensive. People like Rezan Fayez, whose 7-year-old son goes to ISA, stood up to defend the school's curriculum and her son's experience there.

"He can speak, read and write Arabic almost as well as he can English; he's learning Islamic studies, understanding between Muslims and non-Muslim," Fayez said. "If we were breeding terrorists, if there was any tinge of truth to what you've been hearing tonight, you would be hearing about it from the students."

Iman Kandeel, a former ISA student and a Massachusetts Institute of Technology graduate, also spoke up. "In addition to the strong background I got in math and science, I also learned about giving back," Kandeel said. "We are not taught Shariah law; we are not taught to destroy the Constitution."

Doubts About Curriculum And Staff

But there are issues. A former valedictorian of the school is serving a life sentence for plotting to assassinate President Bush. A former principal was arrested because instead of reporting a complaint from one of his students about sexual abuse at home, he deleted the report and returned the child to her father.

And then there is the debate over the textbooks.

Ali Ahmed, a Saudi dissident who works for the Gulf Institute, has been studying the ISA's curriculum for nearly 10 years.

After a 2007 federal commission called for the school to be shut while the government examined its textbooks, the ISA removed sections from textbooks that were objectionable to the commission, including passages about Jews conspiring against Islam and the acceptability of killing unbelievers in certain situations. But the Gulf Institute still takes issue with some of the content that is currently in the school's textbooks, including this passage, in an Islamic studies textbook, which condones child marriage. Graphic by Nelson Hsu/NPR hide caption

"These are ideological materials that are indoctrinating young students in hatred," Ahmed says. "If you are not a believer in their interpretation of the religion, you are not protected. Your blood, your honor and your property is up for grabs. And that explains suicide bombings a lot."

In 2007 a bipartisan federal commission on international religious freedom called for the school to be shut while the government examined its textbooks. The commission was concerned that the school promoted religious intolerance and violence against people who aren't Muslim. The school was closed temporarily and erased paragraphs from its textbooks in response to the inquiry.

For now, the controversy continues, as does the pressure on local politicians. Michael Frey is on the Board of Supervisors. He voted for the school's expansion and says he still gets criticized for it. One man approached him at his local supermarket on a Sunday morning. In an aggressive tone, he said he couldn't believe Frey could consider himself a conservative after voting the way he did.

"I said, 'I don't believe anybody who wants local government to be reading texts and making decisions on schools based on what they teach is a conservative,' " Frey replied. "To me, that is one of the biggest intrusions you could possibly imagine."

Frey points out that two Christian schools also filed applications to expand last year in Fairfax County and no one questioned their textbooks.

"How do I know this Christian school isn't teaching hatred against non-Christians?" Frey asks. "I didn't read their texts, but if you want me to start to base land-use decisions on that [it's a] terribly, terribly slippery slope."

For now Fairfax County is waiting for the school to submit its site plans. Before expansion can even begin at the academy, the county will have to install left- and right-turn lanes into the driveway from Popes Head Road. So that two-lane winding country road will need to get a little wider.

The ISA had initially agreed to let NPR visit its campus, but canceled at the last minute. An e-mail said the school administrators were tired of all the media coverage and didn't want more, especially since they got the approval to expand.