Accessibility links
Corinne Bailey Rae Mesmerizes With 'The Sea' The British singer-songwriter made a splash in 2006 with her chart-topping single "Put Your Records On." Now, two years after the death of her husband, Rae returns with The Sea, and it's light-years ahead of what she'd done before. The album marks the arrival of a newly observant songwriter and an absolutely fearless singer.

Hear Corinne Bailey Rae's 'The Sea' In Its Entirety 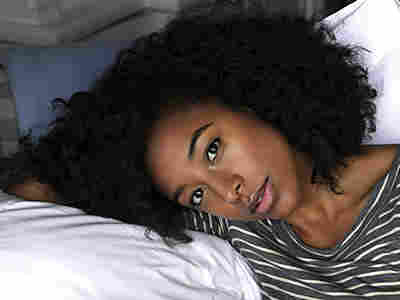 British singer-songwriter Corinne Bailey Rae made a splashy entrance in 2006: Propelled by "Put Your Records On," her debut entered the U.K. charts at No. 1. Here in the U.S., her album reached as high as No. 4 on the Billboard charts, brought her three Grammy nominations and eventually sold more than 4 million copies worldwide. This week, Rae returns with her second album, The Sea, and it's light-years ahead of what she'd done before.

When a young singer has a hit right out of the gate, the way Rae did, you can usually predict what comes next: more of the same. It's understandable, because these days, nobody in the music business likes to mess with success. But that's one reason her follow-up is so interesting. It's hardly a replica of what worked last time.

Rae's second effort marks the arrival of a newly observant songwriter and an absolutely fearless singer. It's a massive leap forward.

For a while after her debut, Rae was living the dream. She toured all over the world and collaborated with several of her idols, including legendary singer Al Green. Then, in early 2008, while she was recording this album, her husband died suddenly from an accidental drug overdose.

Rae spent months in seclusion. She says that when she returned to work, she was surprised to discover that the songs she'd completed before the tragedy still resonated. She'd already been writing about grief — the title track describes a canoeing accident in which Rae's grandfather died. She pushed herself further in that direction, writing several songs that remember her late husband.

Sadness runs throughout The Sea. It even lurks between the lines of upbeat tunes that showcase her fierce, intensely rhythmic delivery. Armchair pop-culture psychologists will say that Rae's growth is the direct result of her recent experience. That's an inevitable conclusion, but it shortchanges her.

What I hear in her mesmerizing vocals — and the album's delicate blending of jazz, soul and pop — is profound artistic restlessness. She didn't just work through grief; she pushed herself past whatever worked before, until she landed on a sound that's thrilling and bold, and like nothing else.