Accessibility links
In Haiti, Earthquake Victims Left To Forage For Food Despite the outpouring of international aid, there are still severe problems with food distribution to tens of thousands of homeless Haitians. NPR visited seven of the largest tent cities in three different areas of Port-au-Prince. Victims said food distribution is irregular, inadequate and often violent. 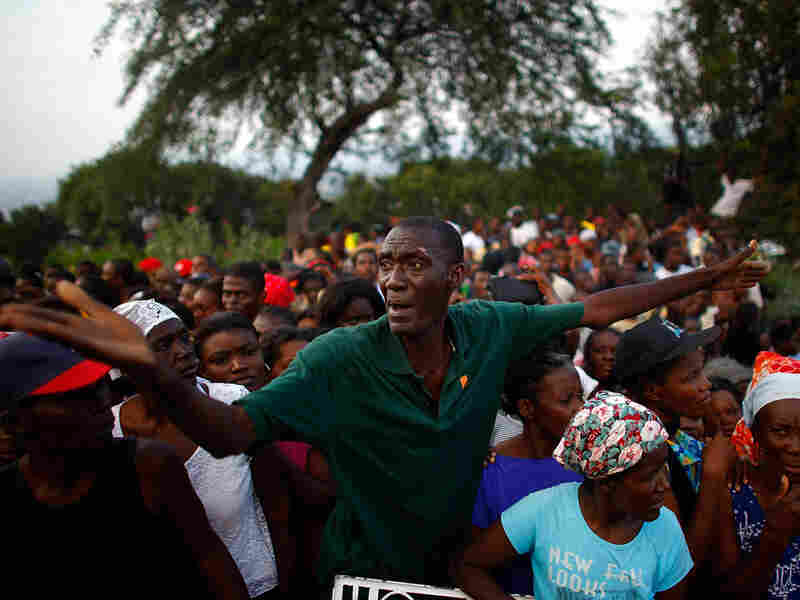 A Haitian man tries to get one of the last handouts of food rations at distribution site set up by the U.S. Army at a golf club on the hills above the Haitian capital, Port-au-Prince, Jan. 19, 2010. It is one of seven tent cities NPR visited to gauge the success of international relief efforts. David Gilkey/NPR hide caption 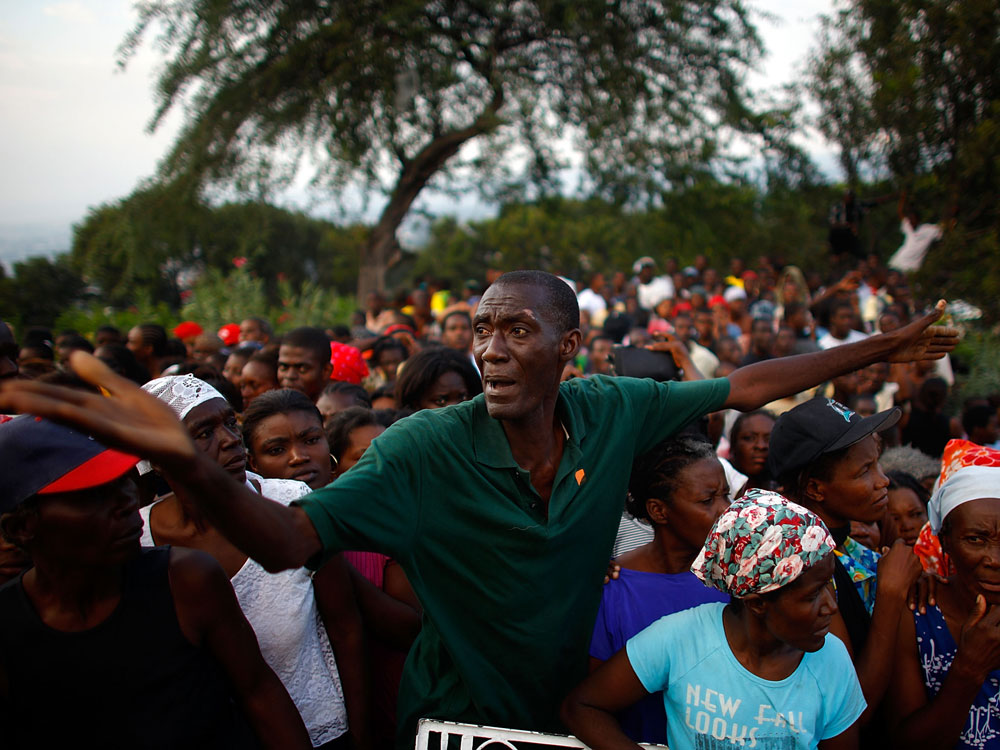 A Haitian man tries to get one of the last handouts of food rations at distribution site set up by the U.S. Army at a golf club on the hills above the Haitian capital, Port-au-Prince, Jan. 19, 2010. It is one of seven tent cities NPR visited to gauge the success of international relief efforts.

Despite the outpouring of international aid, there are still severe problems with food distribution to tens of thousands of homeless Haitians. There are indications that Haitians are largely fending for themselves if they want to eat.

To gauge the success of international relief efforts, NPR visited seven of the largest tent cities in three different areas of Port-au-Prince on Tuesday.

These are spontaneous camps of earthquake victims, ranging in size from several hundred to more than 10,000 people. They live as squatters in public parks, in school grounds and on vacant land.

This was, at best, an unscientific, informal survey. People said there is adequate medical treatment and sufficient water for drinking and washing. But at each camp, people described food distribution as irregular, inadequate and often violent and disorderly. The result: people are hungry.

In St. Pierre Park in Petionville, the 15 members of Julienne Charles' family lounged under a bean-pod tree while a daughter washed clothes.

At this sprawling encampment, the stench of dead bodies has been replaced with the stink of sewage. Charles says when a food truck shows up, there's never enough for everyone. 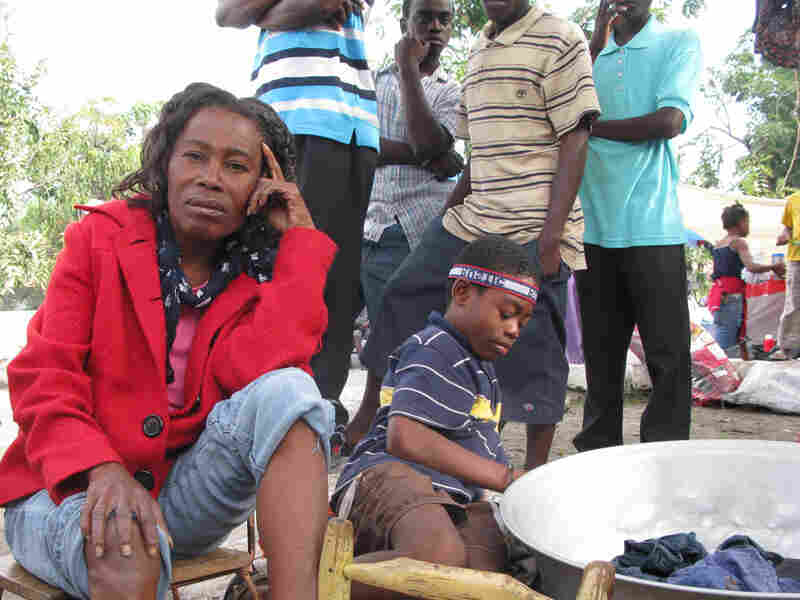 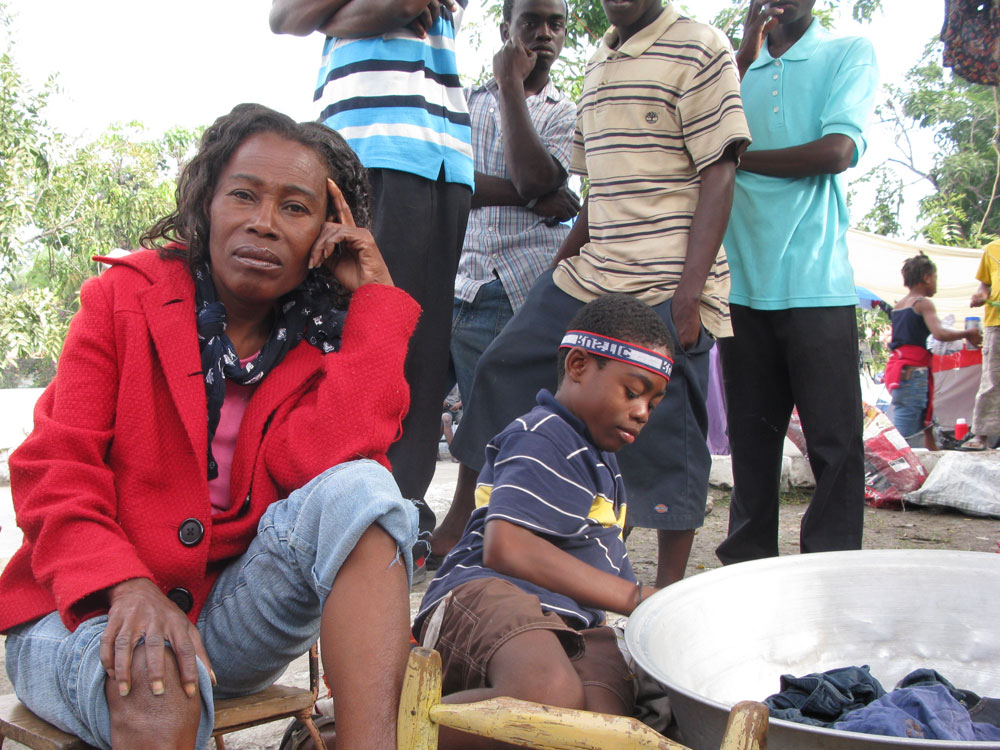 Quake victim Julienne Charles and 15 member of her family live in a tent city at St. Pierre Park in Petionville.

"I can't get there before the line runs out," she said. "The strong go to the front, and even if you get food, the one who is hungrier snatches it away."

Charles added, "We go to the market and buy food but the money is running short."

Her story was echoed again and again by families in the other six camps.

At the campus of Saint-Louis de Gonzague, a Roman Catholic school in Delmas, three women of the LeFevre family sat in chairs next to the bright red Coleman tent they bought for $100 on the street. It will never be used as advertised by a happy family on a fishing trip.

"We buy our food from the street merchants," one woman says. "The last time an aid group stopped here with food was last week. And they stopped coming because every time they came through people would fight."

Back at St. Pierre Park, Hernandez Sicard, a tall Haitian-American from Miramar, Fla., was scoping out the camp to decide whether he should send for relief supplies from a charity he knows back home. He was shocked at the conditions he found.

"I mean look around you," Sicard says. "People are scraping with the little that they have to sustain themselves. Nobody is helping. I think what you see on TV right now is just propaganda."

NPR encountered a similar observation at the tent city at the Delmas Catholic school.

Dr. Robert Bristow has been in Haiti for two weeks with a disaster relief group from New York City. He says he hasn't seen a single formal food distribution.

"In post-disaster areas around the world, usually by this phase, there are lots of children carrying high-energy biscuits that are usually distributed by the WHO. You see wrappers, you actually see them being sold and I haven't seen any of that yet," he says.

Bristow says from his informal observations, "not enough food aid is getting here quick enough."

The U.N.'s World Food Program is the primary food relief agency in Haiti.

In a telephone interview Tuesday night, spokesman David Orr described Haiti as a huge humanitarian challenge — with an estimated 2 million people to feed.

"There are going to be gaps," he said. "You'll always find someone who says they haven't received food. But we are endeavoring to reach all of them."

Orr said as of Tuesday more than 10 million meals have been delivered.

But he noted that there are more than 300 makeshift settlements around the capital. And the over-stretched U.N. force, as of Wednesday, can only provide security for food distribution at five large camps a day. Other aid groups visit smaller camps.

Information is confusing and contradictory in post-earthquake Haiti.

On Monday, top U.S. military officials were briefed by their staff on U.S. relief efforts. They were told that shelter and medicine are the biggest problems — the opposite of what NPR heard in the camps.

Food availability is no longer critical, military officials were told, because people can find food in the markets. Which in one respect, is true.

Haitians are endlessly resourceful. These squalid tent camps have their own economies. They team with vendors, such as one woman selling little bags of boiled beans.

There are bananas, tangerines, potatoes, corn flakes, cooking oil and rum to buy. You can buy a bowl of tripe stew, charge your cell phone and get a pedicure.

But with promised international food aid still scarce, earthquake victims who have lost everything are burning through the money they salvaged from their destroyed home to buy their own food.

At the tent city at Le Mannois Catholic School in Petionville, food trucks from the Dominican Republic have visited this camp only three times in two weeks.