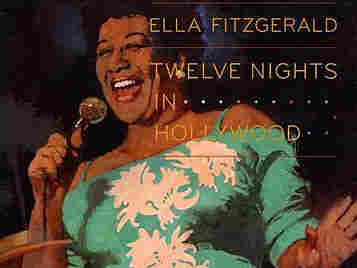 For a long time, I'd never thought of as Fitzgerald as a nightclub singer. She came up working with Chick Webb's orchestra at Harlem's huge Savoy Ballroom, and her later classics were recorded in the studio, or before adoring theater and festival crowds in Europe. She did perform in smaller places, but her nightclub recordings started trickling out only recently. The definitive collection so far is Twelve Nights in Hollywood, four CDs taken from nightclub stands in 1961 and '62, when she was at her peak as an interpreter and improviser.

Of course, she can belt out a classic tune and scat sing like nobody's business — she's Ella Fitzgerald. Her Broadway and movie songs are still the mark other singers aim for, or ought to. But in the intimate setting of the Crescendo Club, she can also bring it down to a whisper and still hold the house.

Showbiz From Another Era

On Twelve Nights in Hollywood, her performances are often pointedly short, and the focus is always on Fitzgerald; in this Hollywood epic, the star is in every scene. Her artistry is timeless, but these live recordings also lay bare the showbiz codes of another era. Fitzgerald introduces celebrities in the house like Walter Winchell, tosses a timely Sinatra or JFK reference into a lyric, and pokes a little defensive fun at rock 'n' roll. She also impersonates other singers, some better than others.

Fitzgerald's humor, unerring pitch and rhythm, and her way of reshaping a melody all come together in a breakneck version of 1925's "Clap Hands! Here Comes Charlie!" She fills the middle section with a free-floating collage of 1920s references, like a jazz T.S. Eliot.

Ella Fitzgerald is funny on stage, and the between-songs chatter prompts her to sing a bunch of introductory verses — those often-omitted build-ups to Broadway songs, created to smooth the transition between talking and singing in musicals. Fitzgerald occasionally bobbles a lyric, or sounds a little flustered by that loud table in the back, the discotheque upstairs or folks requesting her latest single she's going to do anyway. But all that adds to the charm. Listening to Twelve Nights in Hollywood isn't exactly like being in the room with Ella Fitzgerald. But you get to lean in the window.