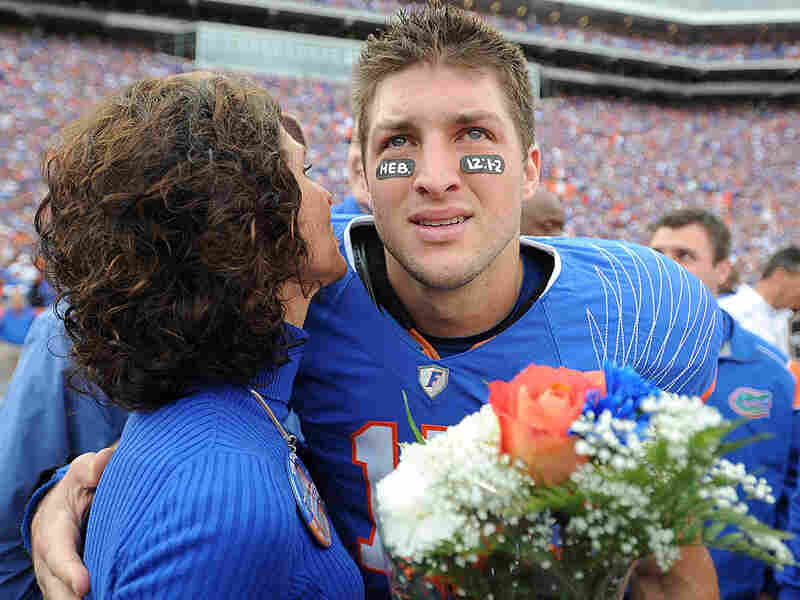 University of Florida quarterback Tim Tebow embraces his mother, Pam, during a November 2009 pre-game ceremony before an NCAA college football game against Florida State. The two are set to appear in a controversial anti-abortion ad that will air during the Super Bowl. Phil Sandlin/AP hide caption 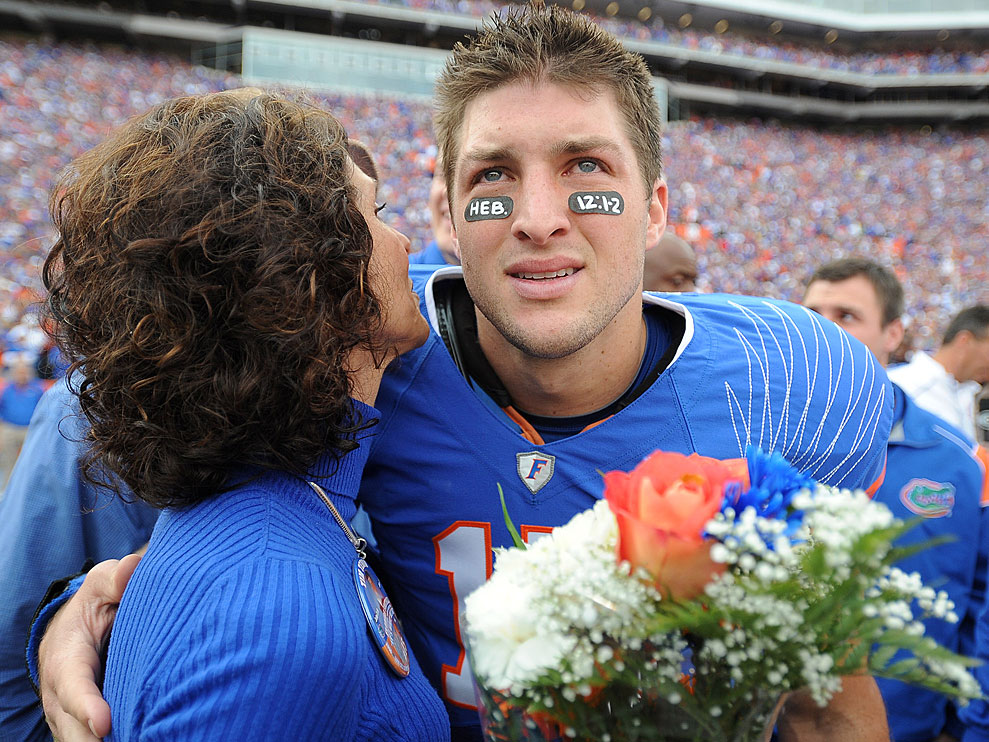 University of Florida quarterback Tim Tebow embraces his mother, Pam, during a November 2009 pre-game ceremony before an NCAA college football game against Florida State. The two are set to appear in a controversial anti-abortion ad that will air during the Super Bowl.

For years, CBS and other networks banned "advocacy" commercials from airing during the Super Bowl.

But CBS recently reversed its stance. A commercial that opposes abortion, featuring Florida Gators quarterback Tim Tebow, is set to air in this year's big game. And some fans say they don't want to see these types of ads in the Super Bowl.

For many, the Super Bowl is supposed to be that one big, fun event each year, where everyone can gather around the television for a good time. Even the commercials are supposed to be entertaining.

"You're having a Super Bowl party to watch commercials about beer and stuff that you're already gonna buy. And nachos, you know," says Lisa Brenneman, a football fan meeting with friends at Capitol City Brewing Company, a sports bar in Washington, D.C.

She and her friends say they look forward to commercials with dancing animals and goofy jokes. They're not looking to debate political issues during a Super Bowl party.

"That's not really where your level of thought is," Brenneman says.

A 'Celebration Of Life'

I'm not really wanting to watch issue-based commercials during a Super Bowl game.

But this year, Focus on the Family, a conservative Christian group based in Colorado Springs, Colo., that opposes abortion, wants to inject a serious topic into the Super Bowl. The group says the commercial featuring Tebow is a "celebration of life."

The two-time national champion and Heisman Trophy winner appears in the ad with his mother, Pam. The two talk about her choice not to abort Tebow when she became ill during her 1987 pregnancy on a mission trip in the Philippines. Doctors urged her to end the pregnancy for medical reasons; she refused.

Focus on the Family is paying for the 30-second spot. Ads during the game are selling for up to $3 million.

In the past, CBS and other networks airing the game refused to run advocacy ads from groups like People for the Ethical Treatment of Animals, the United Church of Christ and MoveOn.org. Some of these commercials lambasted the Bush-era U.S. deficit or spoke on the issue of gay rights.

Women's rights and abortion rights groups point out that long-standing ban — they want CBS to pull the Tebow ad. They also warn that CBS might alienate viewers by showing divisive commercials.

CBS approved the Focus on the Family commercial before making a statement about their new policy on advocacy ads. As the controversy over the ad grew louder over the past few days, CBS issued the new policy. The broadcaster now says it will accept advocacy ads that are produced "reasonably."

The new policy may reflect the tough economy. Scott Kelley, a director of the Center for Sports Marketing at the University of Kentucky, says he thinks demand for Super Bowl ads is down. Before, broadcasters had no financial need to accept a controversial commercial.

"They had demand for ad time that typically exceeded the ad spots they had. So they could avoid the controversy, if at all possible, and didn't have to go down that road," Kelley says.

Now, it seems the financial situation is different.

Back at Capitol City Brewing, Joseph Spilatro says he's not eager to see broadcasters open the door to controversial ads.

"I expect them to be funny and fun," said Spilatro. "I'm not really wanting to watch issue-based commercials during a Super Bowl game."

Whether those noncontroversial beer commercials are actually funny is another topic of discussion.