Accessibility links
Lolo Beaubrun: A Voice Of Hope In Haiti Beaubrun, one of Haiti's most popular and recognizable musicians, leads the 12-person band Boukman Eksperyans. Now more than ever, he's singing in an effort to transform his home country. 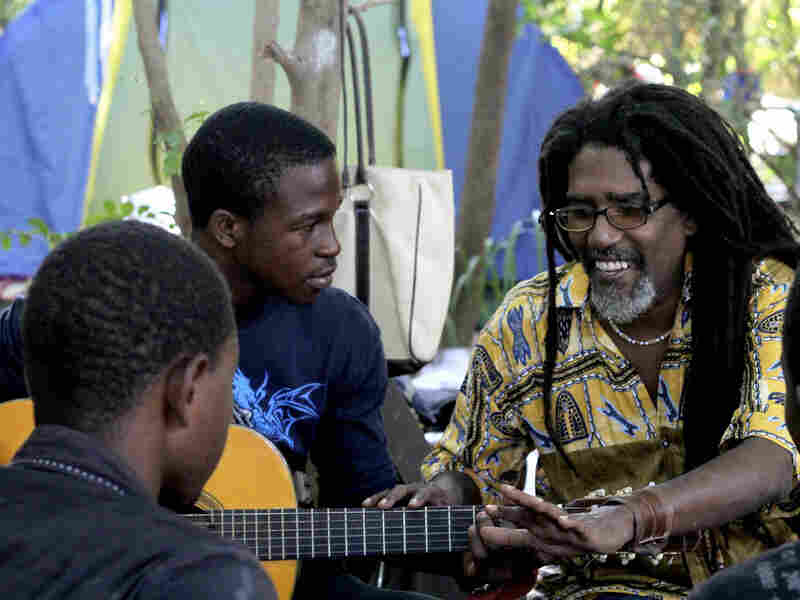 On the day of this interview, Lolo Beaubrun (right) had invited over three young musicians from a group called All Four Stars. Valentina Pasquali for NPR hide caption 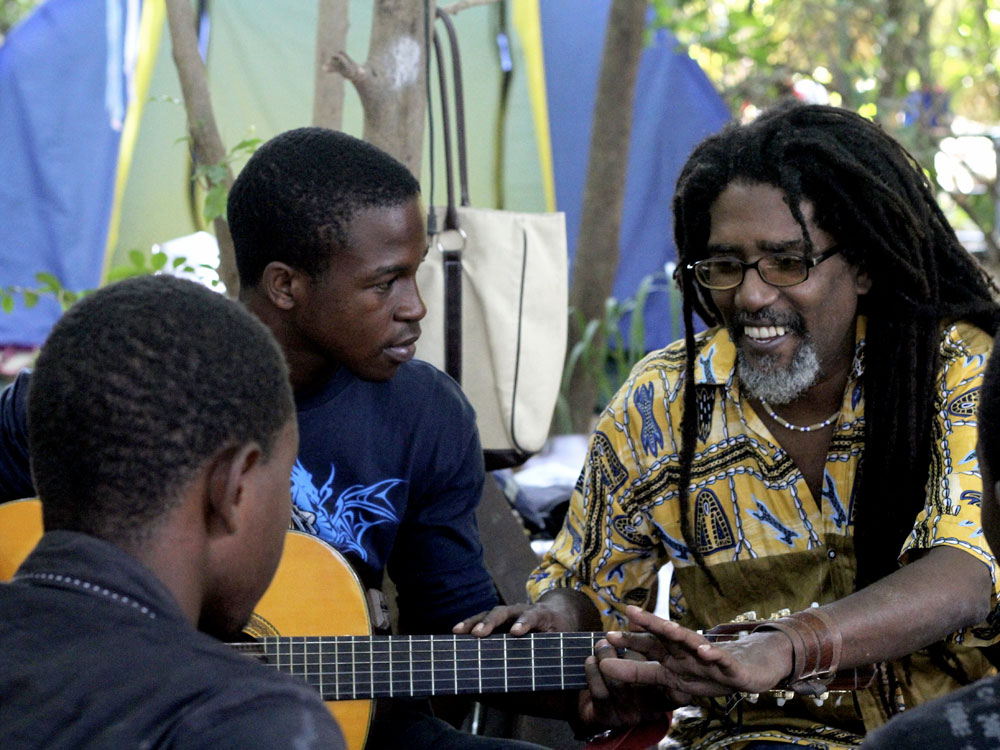 On the day of this interview, Lolo Beaubrun (right) had invited over three young musicians from a group called All Four Stars.

When we walked into Lolo Beaubrun's garden in Port-au-Prince and sat down, he'd invited three young musicians from a group called All Four Stars to back him up on a song they'd written in the days after, in Beaubrun's words, "that thing that happened to us." In an hourlong interview, he never once said the word "earthquake."

The song is about the suffering that Haiti is now enduring — about the importance of having faith amid despondency, and of reviving humanity's connection to the spirit world.

As the singing came to an end, his wife's voice trailed off and Beaubrun said, "We cry a lot. After you see the country, we need to cross over that sadness."

In Creole, his wife, Mimerose, says, "We are Haitian; we are always joyful. This joy we have, even in our misery, when we're poor, it is a strength for us — strength to rebuild the country."

Dreadlocks And A Bible

Lolo Beaubrun is one of the most popular and recognizable musicians in Haiti. He leads the 12-person band Boukman Eksperyans. It plays a mix of rock, reggae and Voodoo trance music that has attracted fans in the U.S. and Europe.

Lolo and Mimerose, both 52, make a striking couple. He's tall, in an African shirt, with dreadlocks down to his waist. She has red-tinted hair, enormous earrings and a single ornamented dreadlock falling below her waist.

Though his house was not damaged, they live outside — and, like most of the traumatized residents of the Haitian capital, they're afraid of another quake. They cook, eat, sleep and receive visitors in the garden under the mango tree and coconut palms. A candle burns next to a Bible open to the 23rd Psalm.

Lolo and Mimerose, like every Haitian, lost people dear to them in "that thing that happened to us." But the symbolism of an earthquake destroying the seat of power in their country was not lost on the musical couple.

"We see the symbol down," Lolo says. "The palace, the palace of justice, everything down. We see that. We were already talking about a new society a long time ago."

Lolo says the dramatic images of the collapsed National Palace, Supreme Court and ministry buildings — which housed a corrupt and dysfunctional government — raise hopes for him that a new society is coming.

An Infectious Voice For Change

Lolo has been challenging Haitians to demand more from their government ever since he formed Boukman Eksperyans with Mimerose 21 years ago.

His lyrics criticized rulers, and he stood squarely on the side of the beleaguered Haitian people. In 1991, his band had to leave the country because of its musical activism. It was social protest music that you could dance to.

Beaubrun claims influences ranging from Bob Marley to James Brown and Jimi Hendrix, among others. In fact, the name Boukman Eksperyans is a tribute to The Jimi Hendrix Experience.

"Boukman" comes from Dutty Boukman, a Voodoo high priest and slave leader who led a Voodoo ceremony in 1791 that's considered the beginning of the Haitian Revolution against the French.

Power Is In The Music

Even amid the chaos of the pulverized city, Beaubrun says he heard about Christian Broadcasting Network founder Pat Robertson's blaming the earthquake on Haitians' "pact with the devil" during their fight for independence.

"I don't believe in that God he's talking about," Lolo says, "because God is love, truth and justice. God doesn't accept people's power over other people."

In the universe of Lolo and Mimerose Beaubrun, the hope of love, truth and justice doesn't come from public figures. It's found in music.

As the lyrics to one song say, "Don't get discouraged. Go inside yourself where you find the spirit. It'll give you the faith you need to cross over this difficulty."