Accessibility links
Texas Rancher An Unlikely Environmentalist Fried chicken tycoon David Bamberger converted some of the most badly damaged and overgrazed hill country into a showpiece of environmental restoration. It's still a working ranch, with cattle and goats, but the management practices used are an example to many in Texas. 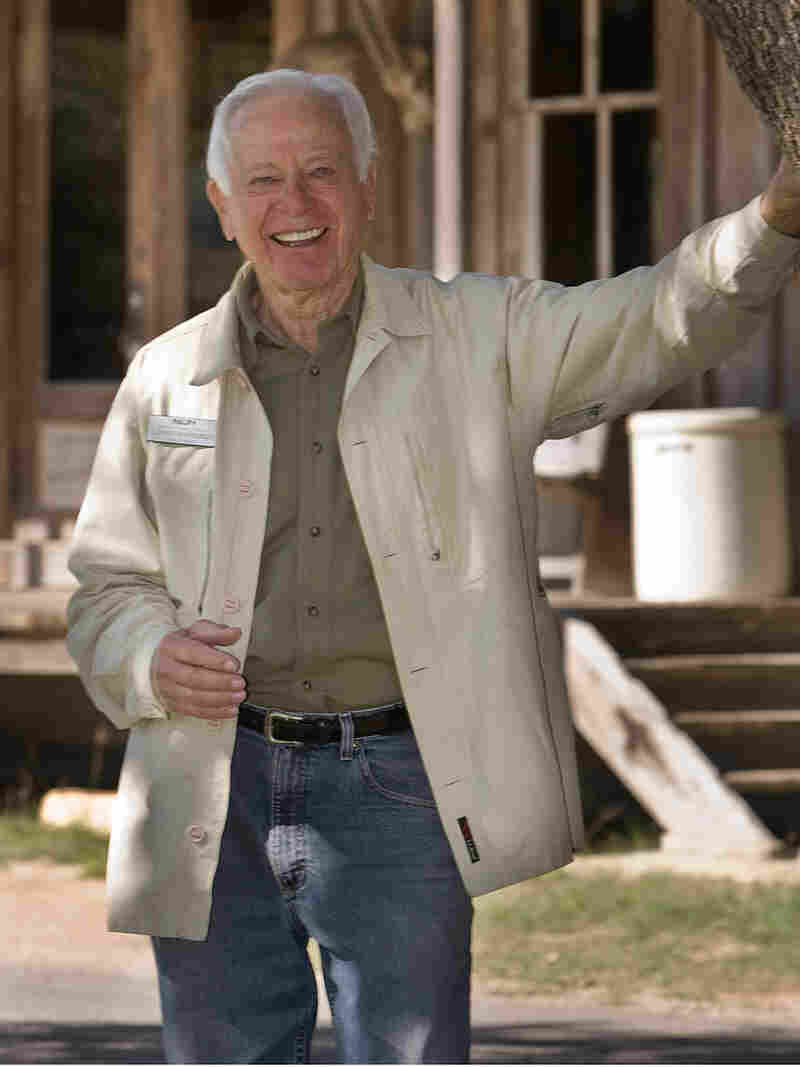 Ranchers in central Texas aren't known for their fondness for government regulation or the Endangered Species Act. But one rancher — a former vacuum cleaner salesman turned fried chicken tycoon — has become a champion of land stewardship and habitat restoration. And it's rubbing off on his fellow ranchers.

David Bamberger converted 5,500 acres of some of the most badly damaged and overgrazed hill country in Texas into a showpiece of environmental restoration. Bamberger has been hailed by the Texas Parks and Wildlife Department, and has won the state's top voluntary land stewardship award.

A visit to Bamberger Ranch is like a trip back in time. Instead of cedar brush and barren limestone breaking the soil's surface, large hardwood trees surround grassy meadows. Wild turkey and deer wander in the open, and bobcats lurk in the hollows hunting game.

One recent morning, a dozen hill country property owners took a daylong tour of Bamberger's ranch to see what they can learn from him. But why would Texas ranchers care about conservation? The answer is a combination of the hill country history and generational change.

The first explorers to the central Texas hill country wrote in letters that the grass came up to their horses' shoulders, and when the wind blew it looked like ocean swells rolling across the countryside. But a century of overgrazing by cattle and goats reduced much of the land to a cedar-filled brush with much of the topsoil gone with the wind — good for looking at, but not much else. When Bamberger bought his ranch in 1969, he was determined to show what the land could look like again.

He started out in the 1940s in Ohio selling vacuum cleaners door to door. He eventually earned his college degree, but instead of moving into a respectable desk job, Bamberger stunned everyone by packing up his wife and baby, and moving to Texas, where he proceeded to sell ever more vacuum cleaners — 12 hours a day, six days a week. His parents and friends did not understand why this smart, likable young man didn't move into a white-collar desk job with a little more dignity.

"Everybody was disgusted with me," Bamberger says. "Selling vacuum cleaners door to door — anybody could do that."

But Bamberger had discovered that he could make a small fortune door to door — and he did. It was straight commission, and Bamberger brought his likable Midwestern personality to a state that was exploding in population. After 10 years, he had banked half a million dollars. 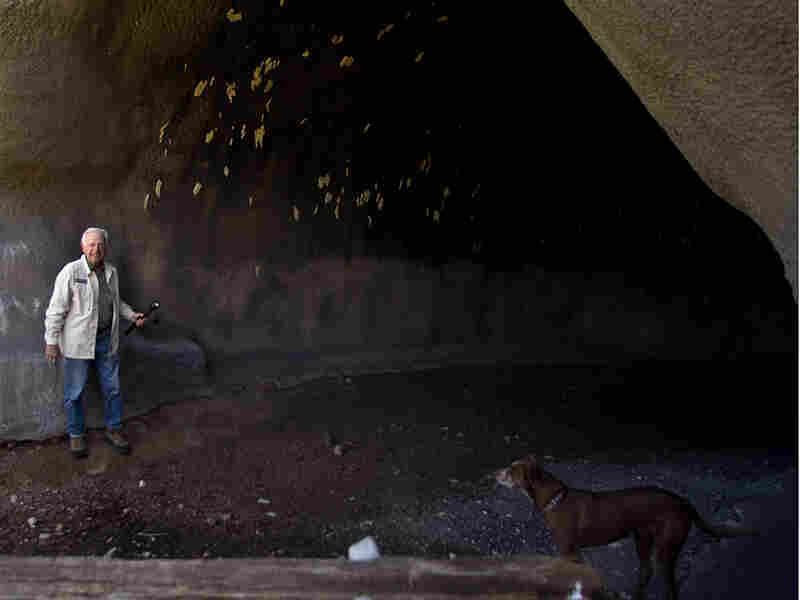 As many as 400,000 bats make their summer home in the cave Bamberger built in 1998. Scott Kentros for NPR hide caption 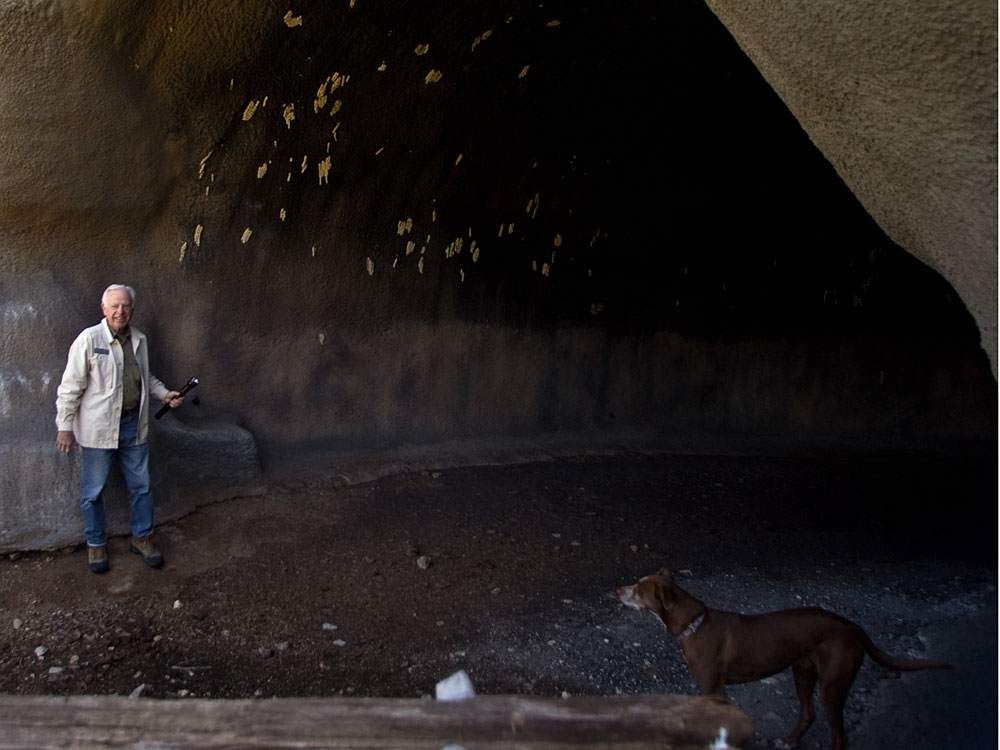 What Do Hundreds Of Thousands Of Bats Sound Like?

That's when opportunity came knocking. Another vacuum salesman, a man named Bill Church, needed a financial backer. He was trying to expand a fried-chicken restaurant. So Church and Bamberger became partners, with the first chicken shack across the street from the Alamo.

By the late 1960s, Church's Chicken had exploded across Texas, and Bamberger's stake made him seriously rich. It allowed him to try to fulfill his lifelong dream: habitat restoration, two words that few people had heard of in 1969.

Those seeds were sown early in Bamberger's life.

As a young teenager in rural Ohio, Bamberger's mother gave him a book about farm life by Pulitzer Prize-winning author Louis Bromfield called Pleasant Valley. Bromfield lived a few farms down from Bamberger, and the families knew each other. After reading the book, Bamberger decided there was no more noble cause a man could undertake than restoring the land, while still using it to benefit.

"Realtors were trying to show me places with landing strips and big fancy houses, and I says, 'You got me all wrong. I'm not interested in this kind of stuff. I want something nobody else wants. I want something that has been so beat up, so neglected,' " Bamberger says.

And he has spent 41 years strategically restoring his land.

He cleared much of the juniper ash. He bought barrels of grass seed — throwing $5 handfuls of it into the wind from the back of his tractor. He carved plateaus into his hillsides to hold the rainfall, letting it filter down into the aquifer below. He planted hundred of trees.

It took decades of careful work by both Bamberger and nature, but now 3,000 people a year visit the ranch to see the results.

Chad Norris, aquatic biologist for the Texas Parks and Wildlife Department, says the changes wrought by Bamberger are felt almost all the way to Austin. "What he does here affects the quality of the water running off the land, and in that respect, it affects everyone downstream."

Some of those who come to learn are new landowners who've made their fortune in Austin's high-tech industry. The locals call them "Dellionaires" because the first wave worked at nearby Dell Inc. These owners buy property not to make money off of it, but for recreation; and Bamberger's message of habitat restoration resonates strong. 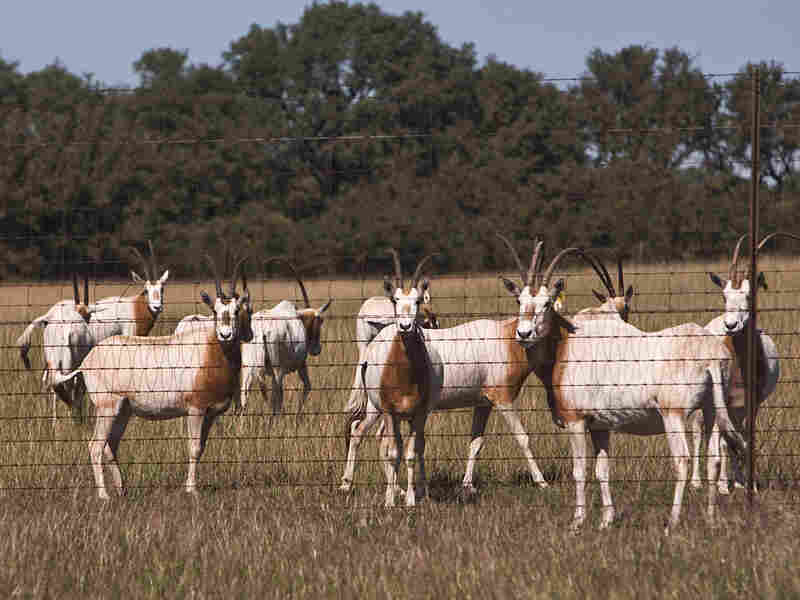 The Bamberger Ranch Preserve is home to 60 of the scimitar-horned oryx, an endangered species that has not been seen in the wild for 20 years. Scott Kentros for NPR hide caption 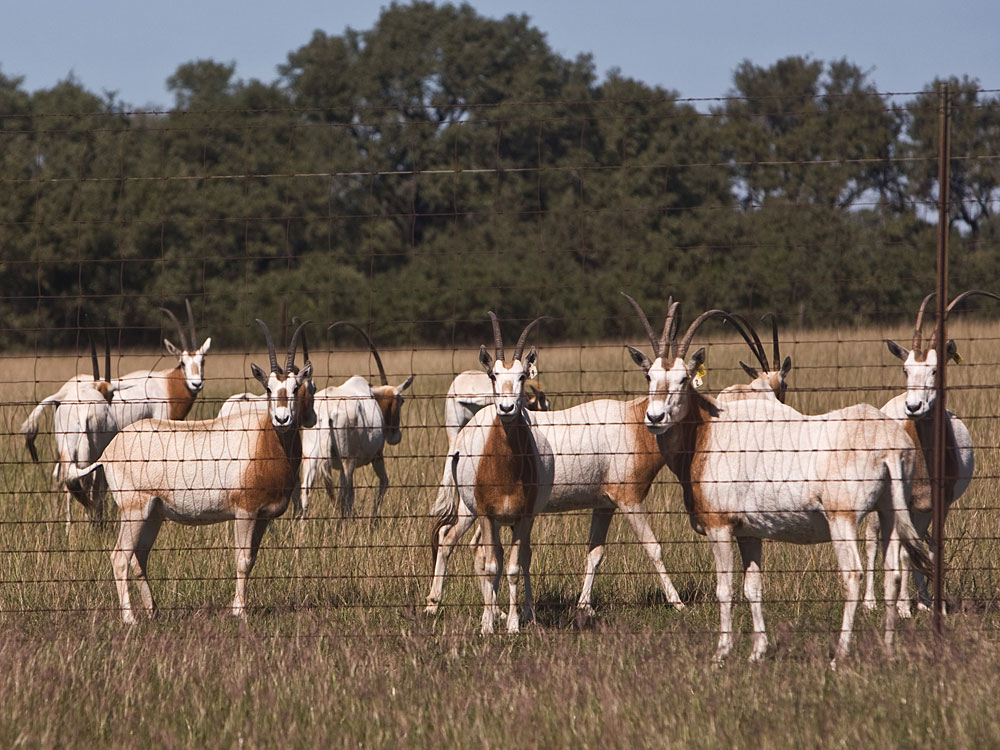 The Bamberger Ranch Preserve is home to 60 of the scimitar-horned oryx, an endangered species that has not been seen in the wild for 20 years.

Mark Zuzanek is a software engineer who is attending his fourth workshop here. He's already taken the Ranch tour, the Trees and Shrubs Workshop, the Native Grasses Workshop, and now he's back for the Water Workshop.

"I come here to learn, in a very short period of time, what it has taken these people 40-plus years to learn," Zuzanek says.

The traditional ranchers have been far more skeptical. Bamberger sounds too much like an environmentalist to them. But two years of serious drought have started to change that.

Jacque Couser has more than 1,000 acres outside New Braunfels, Texas, and reaction to a drought has put her best grazing land in jeopardy.

"We had to keep the cattle in one area, and now it's severely overgrazed. You can kill the land just like you can kill anything else," Couser says.

If some Texas millionaires buy hill country property to build 20,000-square-foot homes, private runways and swimming pools that would make a Roman emperor blush, Bamberger is role-modeling a different way to show off.

He's organized dozens of other landowners to plant a beautiful but highly endangered tree called the Texas snowbell. He's turned a square mile of his property into habitat for the highly endangered scimitar-horned oryx, which has disappeared from the African Sahara. Turns out Texas hill country is the perfect habitat for a small herd of oryx, and there are so few left that Bamberger trades breeding-aged males with zoos around the world to enhance the world population's genetic diversity.

Then there is what was considered Bamberger's folly. In 1998, he decided to carve out a three-dome cave into one of his hillsides and line the ceiling with gunite. The ranch staff rolled their eyes when he told them he wanted enough room for a million Mexican free-tailed bats. For years, no bats came. But slowly, they began to find Bamberger's cave, and now as many as 400,000 bats make their summer home there. The cave is called a "Chiroptorium" — a term his wife and son came up with that combines Chiroptera, the scientific order bats are in, and auditorium.

If you think it's all good and well for a wealthy scion to restore his little piece of Texas hill country paradise but that it's beyond the means of the average landowner, Bamberger and the Texas Parks and Wildlife Department want you to stop making excuses.

"You don't need a bulldozer. You need a chainsaw, wheelbarrow, axes, hand tools, and a lot of friends coming out from time to time, and a little time," Bamberger says. "You can buy used equipment — don't waste your money on new — and you can accomplish on your property what I've done here."