Accessibility links
If You Could Vote, Who Would Win A Grammy? Sunday's Grammy telecast comes at a time when the music industry's major labels are threatened with extinction. Grammy producers would love to duplicate the success of American Idol, on which viewers have a hand in crowning the next pop superstar. But the Grammys also remain committed to the old awards-show model, wherein a select group of industry insiders picks the winners.

Watch Five Of The Most Memorable Grammy Performances 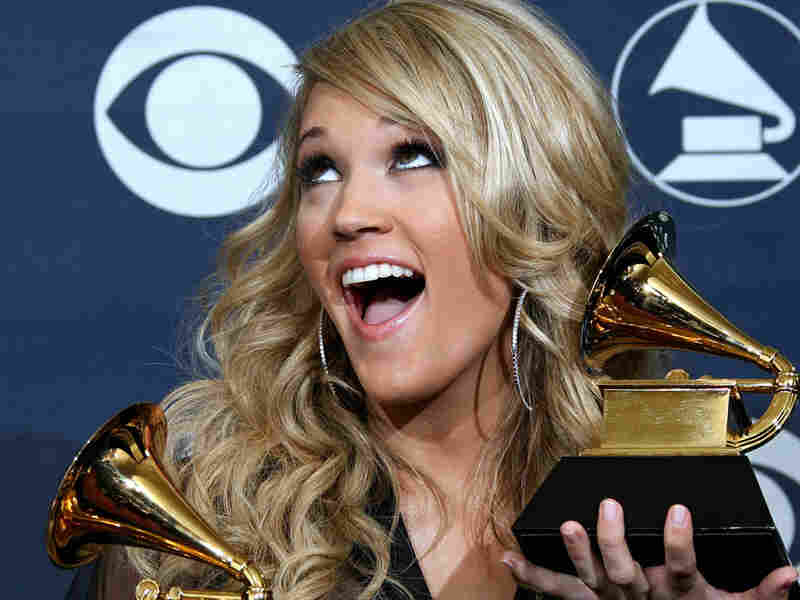 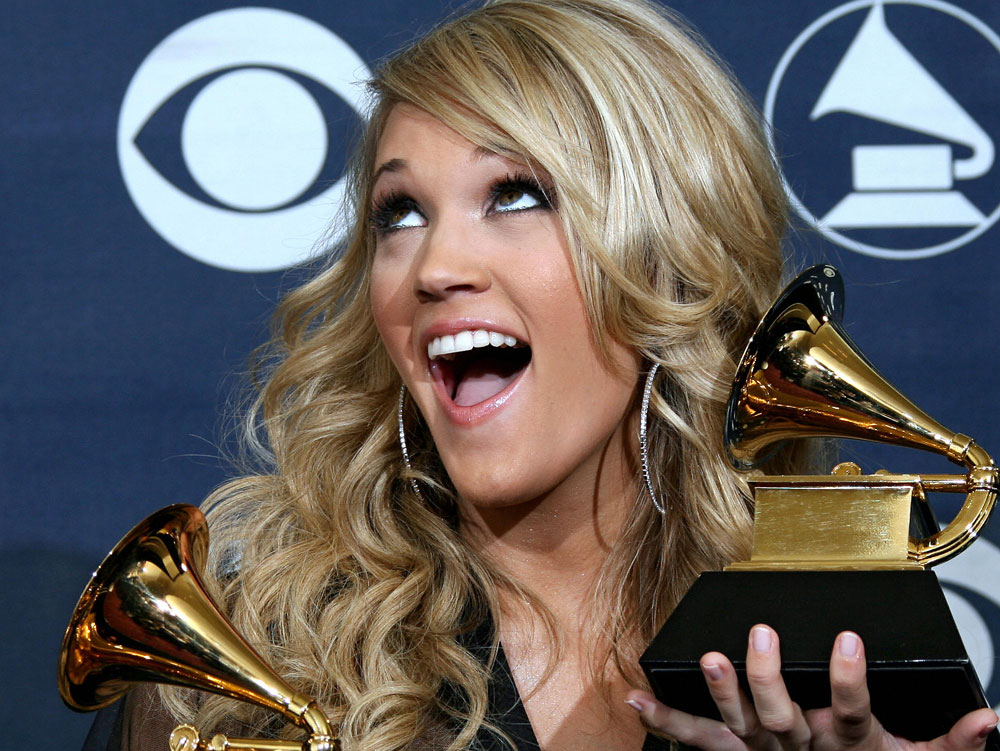 This weekend's Grammy Awards telecast comes at a time when the music industry's labels are threatened with extinction — faced with a brave new world of consumer choices and the Internet. The Grammy producers would love to duplicate the success of American Idol, on which viewers have a hand in crowning the next pop superstar. But the Grammys also remain committed to the old awards-show model, wherein a select group of industry insiders picks the winners.

The Grammy Awards do make some nods in the direction of audience participation. This year, you can vote for which song Bon Jovi should play during the show on Sunday night. The slogan of this year's Grammy marketing campaign is "We're All Fans." The matching Web site includes something called a FanBuzz Visualizer, which turns fan posts and tweets into images of Taylor Swift and Beyonce. This newfound interest in social media doesn't surprise Slate pop critic Jonah Weiner.

"You can't be giving out awards and not have the success of American Idol in mind, and all its attendant buzzwords like democratization and crowd-sourcing," he says. "Those words sell, so they're trying to apply them topically to the awards. Whether it's changing the process of how an award gets in a musician's hands, it doesn't seem like it is."

"The voting by peers is at the heart of what makes the Grammy what it is," says Neil Portnow, president of the Recording Academy, which produces the annual Grammy telecast. Portnow says he's all for audience participation — just not when it comes to handing out actual Grammys.

"When you think about a Grammy Award," he says, "it's a peer award. It's a voting membership that qualifies in order to vote. So when somebody receives a Grammy, they look upon that as the ultimate compliment. And that all really emanates from the process."

In theory, the Grammys are supposed to recognize what's good, not just what's popular. But several factors conspire against the awards. The voting members — musicians, record producers, engineers and executives — tend to be older than the average pop-music fan. And there are more than 100 different categories of Grammys. Because the voters may not know a lot of the nominees, they seem to rely on name recognition or nostalgia when casting their votes. Weiner says that can lead to some head-scratching decisions.

"What the Grammys promise is there will be an expert opinion," he says. "In practice, they sort of lose some of that sense of authority. Because their nominations reflect this mixture of popular opinion and weird, left-field choices that make the Academy seem out of touch."

In 2001, for instance, the academy bypassed Radiohead, Eminem and Beck to give Album of the Year to Steely Dan.

When it comes to being in touch, the Grammys are also hamstrung by the eligibility rules. To qualify for the January awards, an album has to come out before Labor Day of the year before. That excludes a lot of the high-profile records labels schedule for release before the holidays — which in turn means that they turn up at the Grammys more than a year later. Still, Los Angeles Times pop critic Ann Powers says most pop fans don't seem too upset.

"What's being shut out is the music elites," she says. "The critics, the tastemakers, the hipsters who don't see themselves reflected at the top of that ticket. Those are the people who have always been alienated by the Grammys, and continue to be. But I think for the average music fan, they're seeing what they like."

Powers says that over the last few years, the Grammys have done a better job of reflecting the tastes of mainstream pop consumers. This year, for instance, the top categories are dominated by a trio of pop divas: Taylor Swift, Beyonce and Lady Gaga.

For this year, anyway, Powers says the Grammys are recognizing music that's both popular and interesting. And she notes that the awards aren't that different from American Idol. The Grammys employ a secret committee to pick the nominees in the top four categories; on American Idol, the producers make their choices before the show goes on the air.

"American Idol offers basically the illusion of democracy," she says. "The singers the fans get to vote on go through a heavy pre-selection process. It's created this illusion of fan involvement. It's really fan involvement in a very narrow sphere."

In other words, we may all be fans, but that doesn't mean our votes really count.