Accessibility links
Could 'Single Ladies' Win Song Of The Year? Why is Beyonce's ballad, "Halo," up for the Record of the Year Grammy, while her super-produced dance track, "Single Ladies," is up for Song of the Year? The VP of Awards at the Recording Academy defends Beyonce's nominations this year and explains the Grammy selection and categorization process.

Could 'Single Ladies' Win Song Of The Year?

Could 'Single Ladies' Win Song Of The Year? 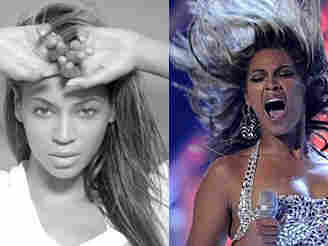 Watch Five Of The Most Memorable Grammy Performances

The traditional knock on the Grammy Awards is that they skew toward veterans at the expense of more vibrant young performers. It's not an unfair charge: See Steely Dan's 2001 Album of the Year victory over Beck, Eminem and Radiohead (plus Paul Simon), or Herbie Hancock's win over Kanye West and Amy Winehouse in 2008.

The 2010 awards, on the other hand, are like the kids' revenge, at least in the major categories of Record, Song and Album of the Year. Beyonce (up for all three), The Black Eyed Peas (Record and Album), Maxwell (Song) and Dave Matthews Band (Album) all emerged in the '90s, with 43-year-old Matthews the oldest of the lot (Maxwell is 37, The Black Eyed Peas all around 35, Beyonce 29). Genre categories sometimes skew older, particularly in Rock — this year, the only nominee for Best Solo Rock Vocal Performance not in his 60s is Prince, who's 51.

Nevertheless, of the two Beyonce song nominations, it seems odd that "Halo" is getting a Record of the Year nomination while "Single Ladies" is getting Song of the Year. Surely, the big, swooping ballad (written by the newly crowned king of the big, swooping ballad, Ryan Tedder of OneRepublic) is more of an obvious Song nominee, and the insistent dance number is more in line with Record? One nod to rationality is the second nomination of the songwriting team Terius "The-Dream" Nash, Christopher "Tricky" Stewart and Thaddis "Kuk" Harrell in the Song category (they were nominated in 2007 for Rihanna's "Umbrella"). If Tedder is the king of the ballad, the trio rules the realm of insanely catchy, fiendishly layered dance-floor-fillers.

The distinction between those two fields has long been fuzzy, even to music-savvy fans. To clear up the confusion — and for a glimpse into the process by which these things are decided — I spoke with Bill Freimuth, the Recording Academy's Vice President of Awards, over the phone about Grammy categories, the nomination process and the politics of the awards.

NPR Music: One thing that I think tends to confuse people who don't pay close attention to the Grammys is the difference between Song of the Year and Record of the Year. How would you explain it?

NPR Music: This year, what I noticed are the two Beyonce songs in those categories. "Single Ladies" strikes me as more a record than a song, but it's up for Song of the Year, while "Halo" is more of a traditional song, but it's up for Record of the Year. I'm guessing that, because this is an industry award, a lot of lobbying goes on. How much does that weigh into particular songs being in particular categories?

Freimuth: First of all, there is some lobbying that goes on to our voters as far as, you know, people will take the "For Your Consideration" ads out in Billboard, maybe do an email blast to everyone they know who's a voter. We, of course, don't share that information [about who is a voter] with anybody, so they have to be guessing. But I think it goes back further than that in our process, which goes back to the entry process. Entries can be made by members of the Academy, and these members don't necessarily have to be affiliated with the recording at all. They can just say, "Boy, I really loved 'Single Ladies,' and I want to enter it everywhere."

But on the other side of that, we do accept entries from labels, and I would say probably at least two-thirds of our entries are coming straight from the labels. And the labels, by making their entries, are sort of doing their own bit of deciding what they think is best. Sometimes, they're clearly going to be doing that with a bit of political motivation: "We really want this particular track recognized for songwriting, and we want this particular track recognized for production and performance." Or, "We want this track recognized in" — keeping Beyonce in mind for a minute — "we're going to nominate this track in Pop Female and this track in R&B Female and this track in Traditional R&B." Because she's such a versatile artist, she really does span those genres.

Sometimes, our screening committees will move them, especially in the genre categories. We'll have actually a very large group of people sit and listen to something that's in Female R&B and they'll move it to Pop Female. Or something that's entered in Traditional R&B, and they'll move it to R&B Female, which is not for traditional R&B-based stuff.

It's a combination of that, and what our voters are choosing when they are thinking about these things; they like the songwriting on this one and the production on this one. And also, for many of our fields, including our general field, it goes through a third step, other than the two ballots from the voters in between there and the nominations-review committee. They'll go and actually listen to everything in the Top 20 slots that the voters give us. In other words, for something like Record of the Year, we have 700-odd entries. The voters on the first ballot narrow it down to 20, and then this committee takes that 20 and narrows it down to five. One of the things they might do is, if the voters put two or three or eight Beyonce songs, or any other artist's songs, in the Top 20, they might listen to it and say, "This is the one we think is best in this category." Our rules state that a single artist cannot have more than one nomination in most of our categories.

NPR Music: A lot of the commentary I've seen for the big three Grammy categories this year — Album, Song and Record of the Year — is that they're skewing younger than usual, which is how it seems to me, as well.

Freimuth: As opposed to the genre categories?

Freimuth: We have quite a few older artists — well, by older, I don't mean aged [laughs] — but older than their 20s, artists who are represented all over the place. I think The New York Times pointed out that the median age of the [Best Solo Rock Vocal Performance] category artists is 58.

NPR Music: You're talking about the process by which all this stuff is hashed out. Is there a lot of politicking that goes on inside the voting, amongst the voters themselves? Without wanting to violate confidentiality.

Freimuth: To be perfectly honest, there's not. If anybody has any kind of affiliation, they have to state that in writing to us, and we share that with the group. First of all, we try not to get anyone with label affiliations with us in meetings, so they don't feel compelled to do their job. Furthermore, if somebody has produced or engineered or is in any way related to a particular recording that's up for nomination, that's put on the table up front. Partly due to that, and partly due to the overall integrity of the people involved in these committees, there really is not politicking going on in any of the discussion. They come in, and they sit and listen to the music, and they talk about the music simply on quality standards, not political or any other standards. It's very nice to see, I have to say.