Accessibility links
America's Cup Sails Into (And Over) Uncharted Seas The America's Cup is set to start on Feb. 8, and the competition is in for some big changes. The rulebook has been thrown out, thanks to long legal battles. The new boats embrace new technology that lets them soar above the water. 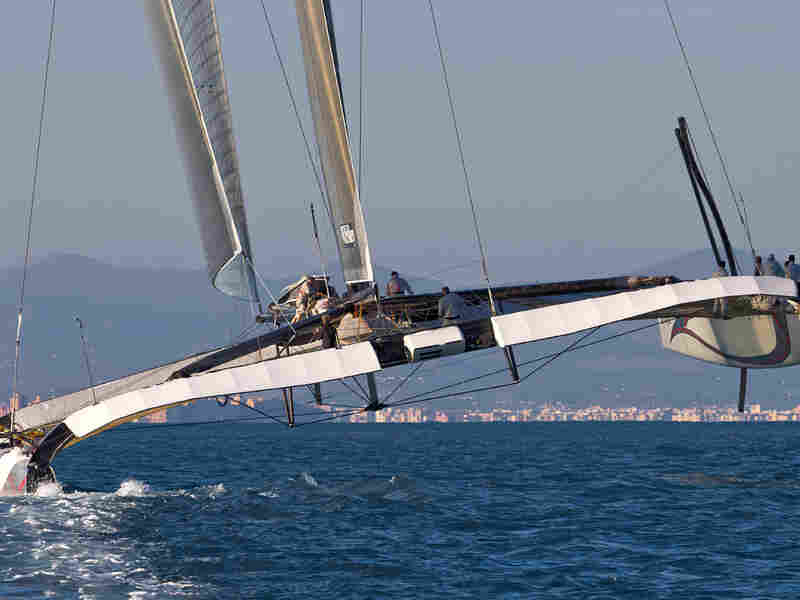 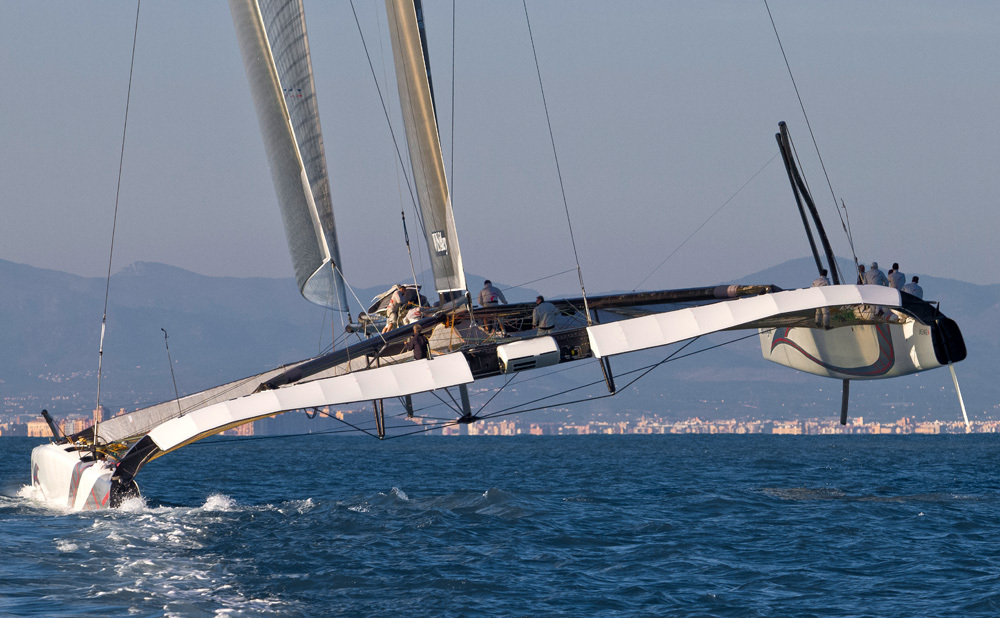 Two gigantic sailing vessels will face off along Spain's Mediterranean coast beginning Feb. 8. But they are nothing like the ones that battled near Valencia three years ago to decide the America's Cup, yachting's oldest and most prestigious trophy.

These boats are bigger, faster and far more expensive than anything ever seen in the cup's 159-year history, dating to the era of wooden schooners.

Traditionally, the race for the Auld Mug, as the silver trophy is known, has been run in monohulls — single sleek shells piercing the water. But this year, both competitors will sail multihulls for the first time. Think Polynesian outriggers on steroids.

This is not a tactician’s race. This is Buck Rogers.

"It's completely different sailing these boats. The speed is much much faster than the old monohulls. That's because they are so much lighter and so much more powerful," Russell Coutts, the skipper for the American challenge, tells NPR.

Coutts is a veteran of New Zealand's successful 1995 challenge. He is taking the helm this year for the U.S. syndicate, a collaboration of software giant Oracle and German carmaker BMW. BMW/Oracle's USA, a giant three-hulled trimaran, is trying to unseat Swiss defender Alinghi's Alinghi 5, an equally large two-hulled catamaran.

To push the envelope even further, both boats carry high-tech foils that help lift them out of the water to minimize drag. As a result, they almost fly over the surface. USA also sports a rigid mainsail that looks like an airplane wing stood on its side. The vertical "wingspan" exceeds that of a Boeing 747. 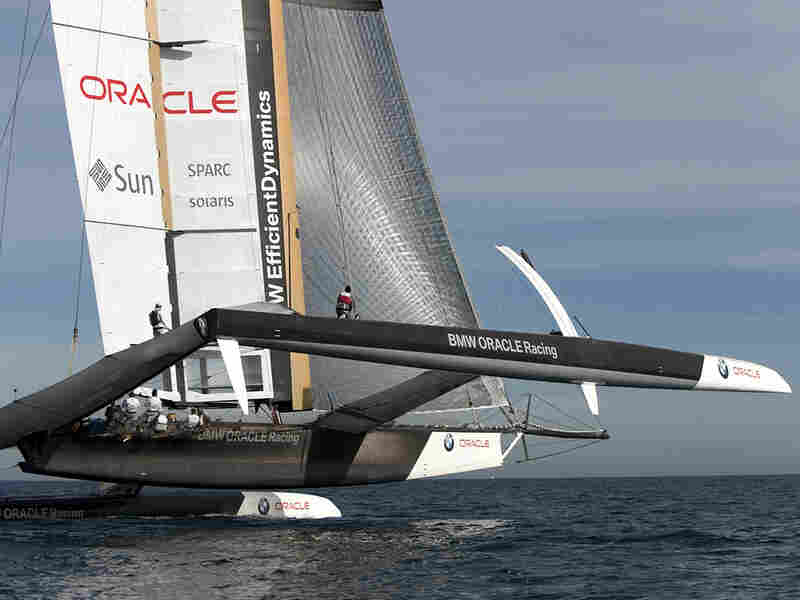 At its waterline, the BMW Oracle trimaran USA 17 is 90 feet long. It has a 223-foot mainsail. Gilles Martin-Raget hide caption 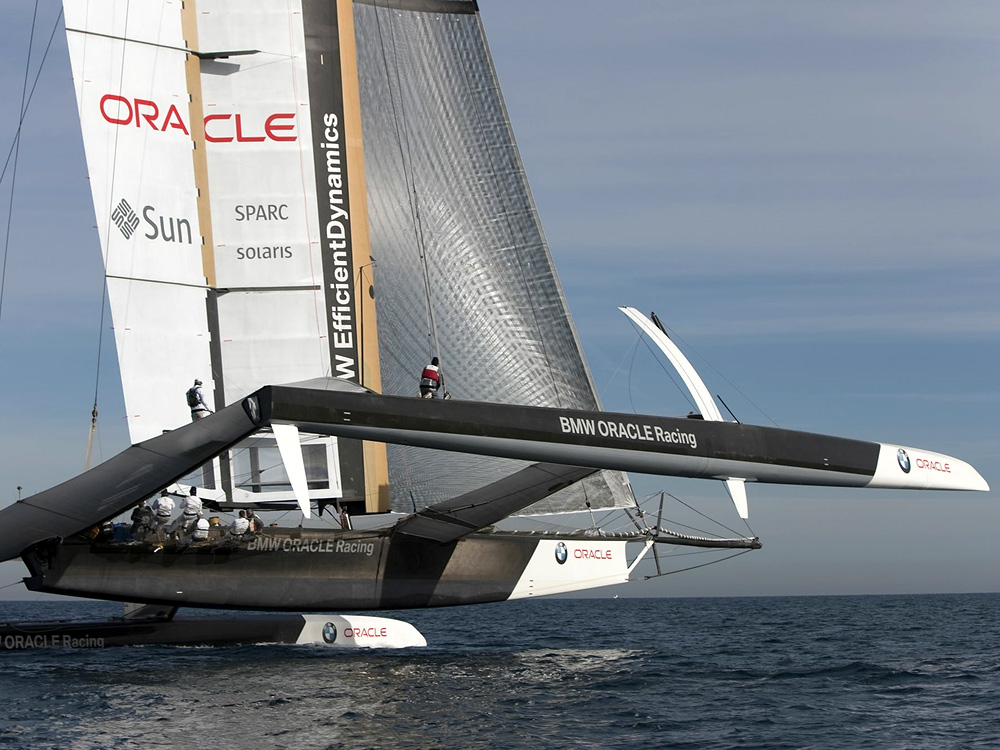 "Pulling that wing sail in and out is ... one-tenth the load" exerted by a similar-size conventional sail, says Peter Melvin, a member of BMW/Oracle Racing's design team. "It actually allows you to pull that sail in and out much faster, and that allows you to sail the boat more efficiently."

The boats are so fast and the loads on them so extreme that they require thousands of sensors to tell the crew what's going on and to warn them if the hulls and rigging are on the verge of breaking up.

"We monitor the structure at all times when we're sailing, and often we have to back off in terms of loads," says Grant Simmer, Alinghi's design team coordinator.

Still, it's one thing to dial things back during training and entirely another in the heat of competition.

"You do have to know the limitations of your equipment," Simmer says. "You're not going to win the race if you have a failure."

And failure is an option, or at least it's a proven possibility. In testing, USA's mast came crashing down. The BMW/Oracle crew narrowly escaped injury.

Critics argue that the yachts' use of technology takes away the human element and threatens the very character of the competition.

"This is not a tactician's race. This is Buck Rogers," says Gary Jobson, the president of U.S. Sailing.

In the two-year legal battle that preceded the upcoming race, the international challenger series that winnowed down the field of competitors has also been eliminated. The U.S. team, sponsored by San Francisco's Golden Gate Yacht Club, was designated "challenger of record" by virtue of winning in the courts — not on the water.

"Let there be no doubt that the 33rd America's Cup is one strange event," says Jobson, who served as tactician aboard Ted Turner's 1977 Cup defender, Courageous, and has sailed with four other AC teams.

The best-of-three series, he says, "throws out conventional wisdom and mutual consent between competitors that we've enjoyed for many decades, in fact centuries. ... It's just a sad state of affairs."

Fans can forget about exciting upwind tacking duels, where the lead yacht tries to force an opponent to sail in its turbulent wind shadow, Jobson says. That maneuver requires tight zigzag patterns that the new multihulls aren't very good at. He also thinks the designs are so radically different that the result could be a blowout to rival 1988. That year, an American catamaran — sporting an early version of a hard-wing sail — trounced a much larger New Zealand monohull. It's remembered as a low point in the history of the race.

And that is not all that rankles purists. Gone are the muscular crew members known as "grinders" who help adjust sails. This year the rules allow powered winches as well as movable water ballast that does away with the need to dangle crew over the side to maintain trim.

All of that technology comes at a price, too: The American boat costs an estimated $10 million.

"It won't be an exciting event in terms of close racing," Alinghi's Simmer acknowledges. "But it's still quite an interesting event technically ... and visually, because the boats are just so fantastic."

Some argue that the America's Cup is all about innovation and producing the fastest boats possible. Like it or not, they say, multihulls represent the cutting edge of yachting technology.

"If you go back to the original deed of gift of the America's Cup, it was really about bringing your country's best weapon to the battle," Melvin of BMW/Oracle tells NPR. "You know, back in the 1850s, they hadn't contemplated these types of boats at all. They were thinking more conventional wooden schooners."

Even so, both sides have hinted that they might consider rewriting the rules and going back to some form of an open monohull challenge in future competitions.