Accessibility links
U.S. Growth Quickens, But Hold The Champagne The economy grew at a 5.7 percent pace in the fourth quarter, the fastest rate in six years, primarily fueled by companies refilling depleted stockpiles. The report is the strongest evidence to date that the worst recession since the 1930s ended last year. But economists say the numbers are still mixed, and that unemployment continues to weigh on any recovery. 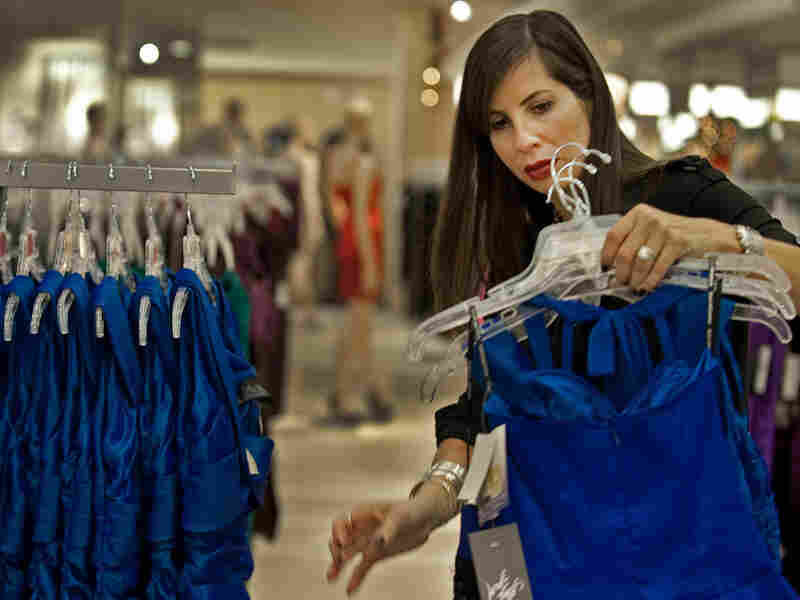 Professional shopper Lauren A. Rothman, who personally shops for those who don't have the time or fashion sense, works her way through the women's department at a major store. Paul Richards/AFP/Getty Images hide caption 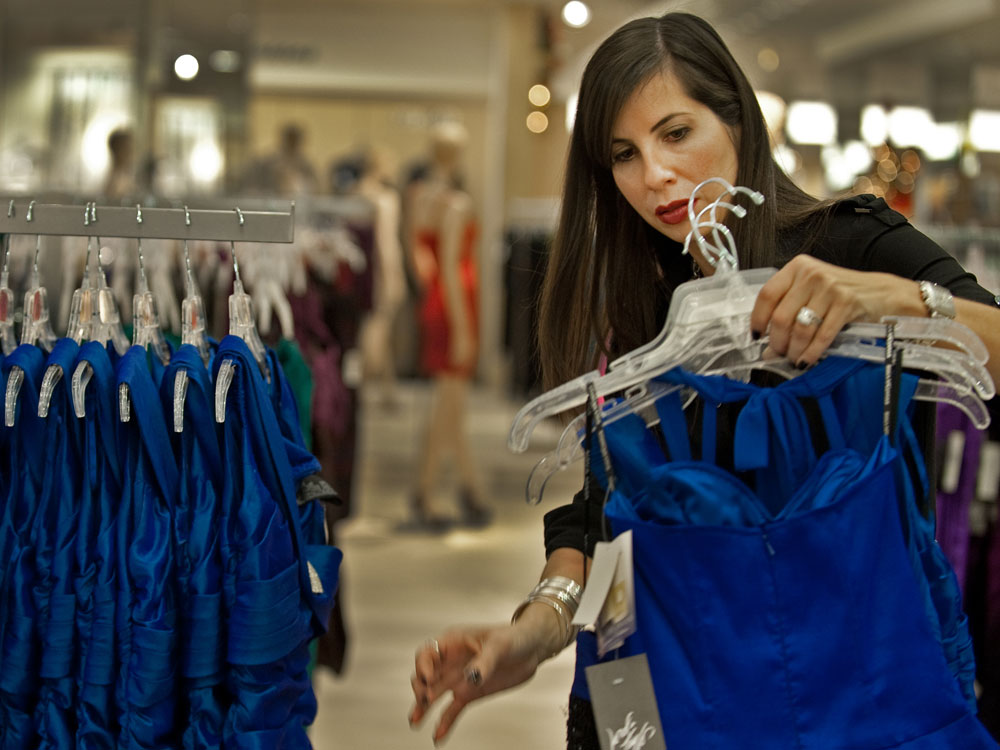 Professional shopper Lauren A. Rothman, who personally shops for those who don't have the time or fashion sense, works her way through the women's department at a major store.

The economy grew faster than expected at the end of last year, the strongest evidence yet that the recession is likely over. But economists say the numbers are still mixed and that unemployment continues to weigh on any recovery.

"I don't think you can call this one done yet," Peter Morici, a professor at the University of Maryland's Smith School of Business, told NPR.

The 5.7 percent annual growth rate in the fourth quarter was the fastest pace since 2003. Growth exceeded expectations mainly because business spending on equipment and software jumped 13.3 percent — much more than forecast. It's the second quarter in a row that business spending has increased, after six quarters of decline.

In a statement from Christina Romer, the chairwoman of the Council of Economic Advisers, the White House sought to put a cautiously optimistic spin on the latest numbers, calling it "the most positive news to date on the economy."

"While GDP growth is a necessary first step for job growth, our focus must remain on getting people back to work," Romer said.

But Morici said the key word there is "unemployment," adding that weak domestic demand is also an important factor.

Even so, the Commerce Department report Friday provided an upbeat end to an otherwise dismal year: The nation's economy declined 2.4 percent in 2009, the largest drop since 1946. That's the first annual decline since 1991.

Economists expect growth to slow this year as companies finish restocking inventories and as government stimulus efforts fade. Many estimate that the nation's gross domestic product will grow at a pace of 2.5 percent to 3 percent in the current quarter and about 2.5 percent or less this year.

That won't be fast enough to reduce the unemployment rate, now 10 percent. Most analysts expect it to keep rising for several months and remain close to 10 percent through the end of 2010.

The National Bureau of Economic Research, whose call on whether a recession has begun or finished is widely accepted, has yet to make any pronouncements that the current downturn is over.

The Bureau typically takes months or even years to digest the data before making such a sensitive call on whether a recession has begun or ended, says Josh Bivens, an economist at the Washington, D.C.-based Economic Policy Institute.

The NBER looks at five indicators, he says, and right now "the indicators are all over the place": real GDP (up), real income (basically flat), unemployment (still high), industrial production (flat) and wholesale/retail sales (weak, at best).

"If you look at the recession of the early 1980s, you saw rapid expansion across a broad range of indicators, so there was a clear sign that the downturn was over," he said. "This time around it's different."

Bivens predicts that it will be at least the middle of 2010 before there's any definitive word about the recession being over.

About 60 percent of the fourth-quarter growth comes from businesses beginning to rebuild their inventories after letting stockpiles dwindle through much of the recession.

If you look at the recession of the early 1980s, you saw rapid expansion across a broad range of indicators, so there was a clear sign that the downturn was over. This time around it's different.

A shift in the so-called inventory cycle can make a big difference to economic growth, even if overall spending by consumers and businesses grows only modestly. That's because an increase in inventories, or even just a much slower rate of decline, means companies are producing more goods to fill orders, rather than drawing on their existing stockpiles.

Excluding inventory changes, the economy would have grown at a 2.2 percent clip, the government said. That's an improvement from 1.5 percent in the third quarter.

Besides business spending on equipment and software, also powering growth in the October-December period was consumer spending, which rose 2 percent.

Government spending was actually a slight drag on growth in the fourth quarter: A small increase in federal spending was outweighed by a drop in state and local spending.

Wages, Benefits Up By Record Low Amount In 2009

A separate report showed that wages and benefits paid to U.S. workers posted a modest gain in the fourth quarter, ending a year in which recession-battered workers saw their compensation rise by the smallest amount on records going back more than a quarter-century.

The anemic gains have raised concerns about the durability of the economic recovery. The fear is that consumer spending, which accounts for 70 percent of economic activity, could falter if households don't have the income growth to support their spending.

Last year, wages were up by just 1.5 percent and benefits rose by the same 1.5 percent, both record lows. In 2008, wages and salaries had been up 2.7 percent, and benefits, which cover such things as health insurance and pension contributions, had risen by 2.2 percent.