Accessibility links
How Revving Up Your Heart Rate, Even A Bit, Pays Off Getting fit can seem a daunting task, but increasingly, research is finding that small changes can make a big difference. Something as simple as brisk walking can markedly improve fitness — and lifespan. One key to optimizing your workout is getting your heart rate in the target zone. 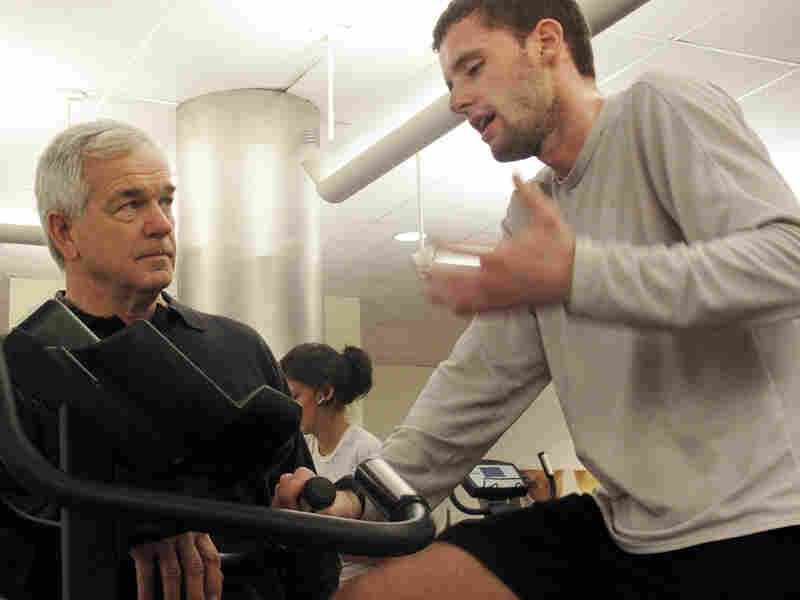 Bob Karch is the chairman and a professor in the Department of Health and Fitness at American University. Here, he helps cross-country champion Steve Hallinan check his heart rate while cross-training on the bike. Allison Aubrey/NPR hide caption 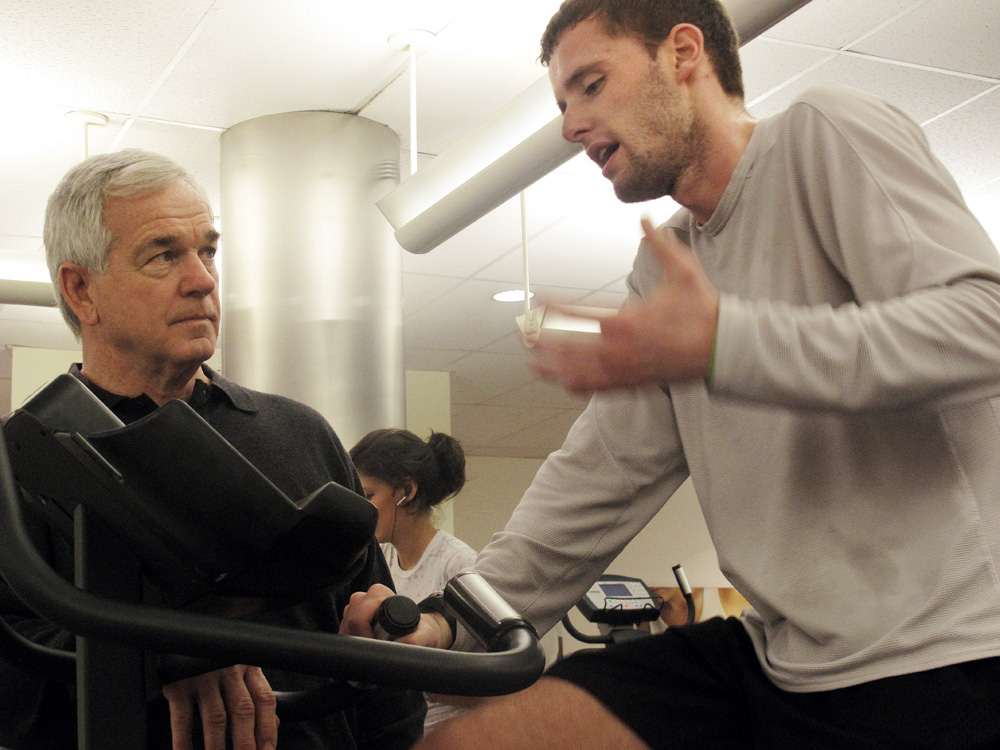 Bob Karch is the chairman and a professor in the Department of Health and Fitness at American University. Here, he helps cross-country champion Steve Hallinan check his heart rate while cross-training on the bike.

There's solid evidence that aerobic fitness ups the odds of living longer. Research suggests that just 30 minutes a day, five days a week can keep you fit. The question is: How do you know you're getting enough out of your 30-minute workout? That's where your heart rate comes in.

Reaching your target heart rate — which is calculated based on your age, gender and resting heart rate — allows you to burn off calories without putting yourself at risk of an injury. And raising your heart rate isn't as hard as you might think.

The minute we roll out of bed in the morning, our hearts begin to respond.

"As we start to move, the muscles call on the heart to deliver oxygen," explains Bob Karch, an exercise researcher at American University. As this happens, the heart rate increases.

Karch straps on a heart-rate monitor and shows how quickly the heartbeat moves into a target zone for cardiovascular fitness:

"I've been racing around all morning from meeting to meeting," Karch says. And he's had a few cups of coffee, which can speed up the beat, too. The monitor shows his pulse is already elevated from its resting rate in the high 60s. 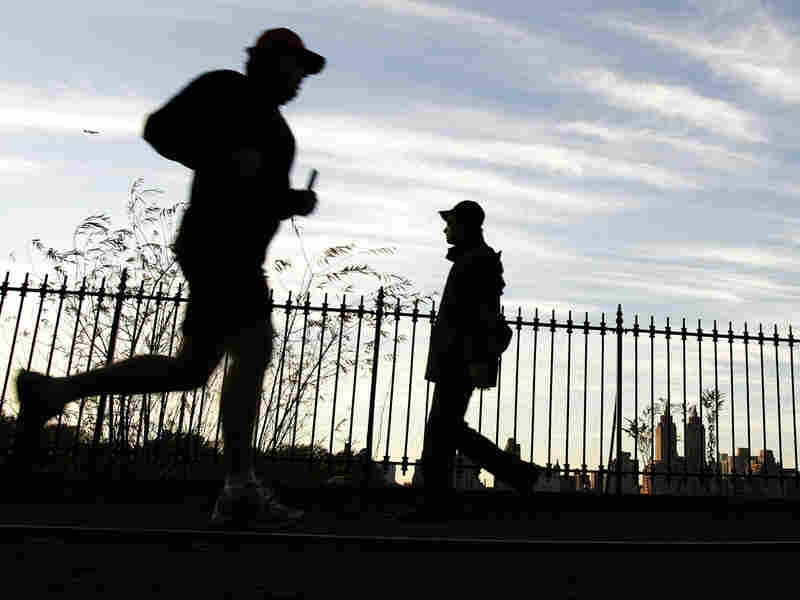 A new study of 13,535 women finds that brisk walkers — who moved at a clip of about 3 mph — were 90 percent more likely to be free of diabetes and kidney disease. Stan Honda/AFP/Getty Images hide caption 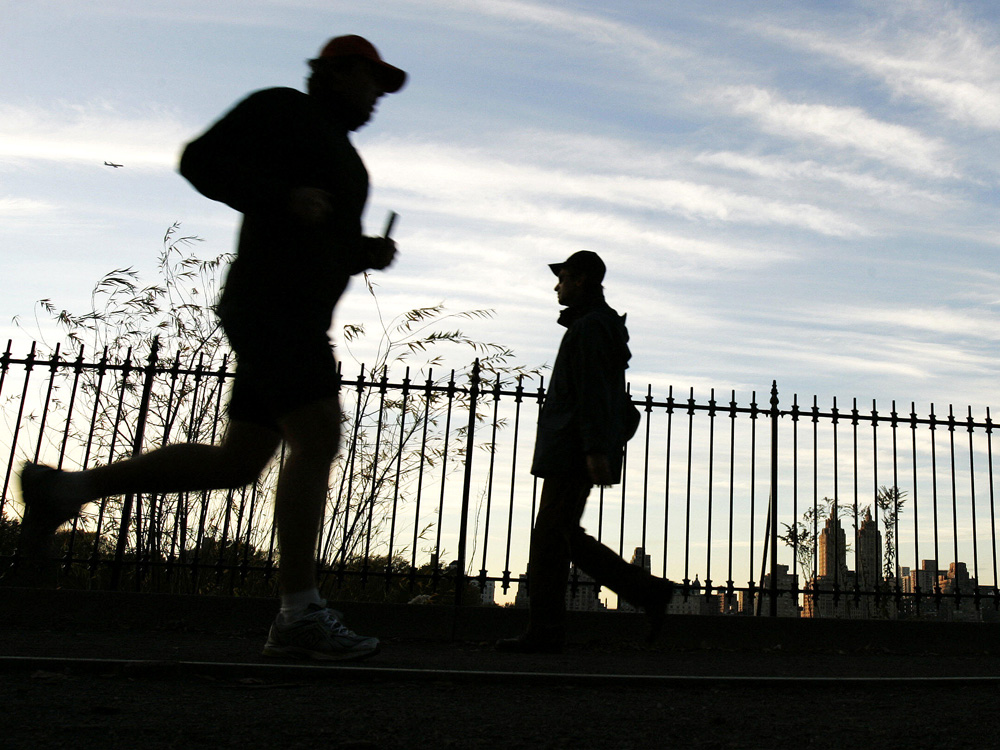 A new study of 13,535 women finds that brisk walkers — who moved at a clip of about 3 mph — were 90 percent more likely to be free of diabetes and kidney disease.

"I'm in the mid-80s just standing here talking," Karch says. At 86 beats per minute, his heart is working a little harder to pump blood and oxygen to his muscles. As he climbs a flight of stairs to get to the third-floor classroom, his heart rate nearly reaches 100 beats a minute.

For Karch, a fit man in his 60s, 100 beats puts him at the low end of the target heart rate zone. (Calculate your resting and exercise target heart rate ranges by typing your age and gender into the top of this Web page). Exercise in this range typically lessens the risk of injury and increases the likelihood of fat-burning — especially if you keep it up long enough.

Karch has been training for decades, so he's able to charge up a few more flights of stairs. And his heart rate stays near the 60 percent range of maximum effort. It's generally not recommended to exercise above 85 percent of your maximum heart rate.

As we begin to build up aerobic fitness, our body moves oxygen and blood into our muscles more efficiently, Karch says.

"And we increase the efficiency of the muscles in actually utilizing the oxygen." The result is that, over time, we can move more with less effort.

"It doesn't take a lot to move from a sedentary behavior to where we're getting a training effect," Karch says.

For folks who are deconditioned — meaning, not in the habit of exercising at all — as little as 72 minutes a week can improve fitness. And a pace of 20 minutes per mile (3 miles per hour) is enough.

"I like to tell people that if I were to take you on a walk at this pace, you'd probably say, 'This isn't exercise!' " says researcher Tim Church of the Pennington Biomedical Research Center.

Church's research has pinned down the specific benefits of exercise at this pace. The women in his study — who were in their 50s or older — walked on a treadmill several times a week for a total of 72 minutes. Church says he expected the 72-minute-per-week group to merely maintain their current fitness level. But during six months of treadmill walking, the women's cardiovascular fitness improved.

"To see an almost 4 percent increase in fitness was really surprising to me," Church says.

And the evidence gets stronger. A new study of 13,535 women finds that women who regularly walked for exercise in their 50s were much healthier in their 70s and beyond. 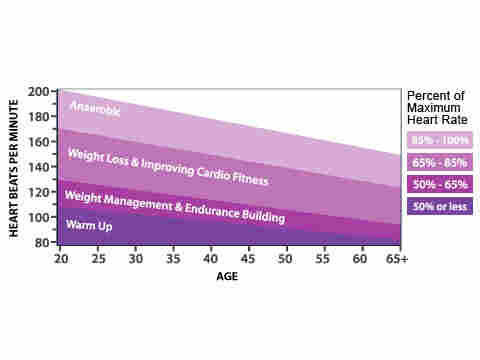 A heart rate of about 60 percent of your maximum is a good pace for fitness. Learn how to take your pulse and calculate your target heart rate. Courtesy of webmd.com hide caption

"This is the big picture," says epidemiologist Francine Grodstein of the Brigham and Women's Hospital. "This wasn't just looking at who had a heart attack." The researchers looked to see whether women had developed chronic conditions, including diabetes, kidney disease, Parkinson's disease and pulmonary disease. They also looked at cognitive function.

What they found might be surprising, given the level of exercise involved. The brisk walkers — who moved at a clip of about 3 mph — were 90 percent more likely to be free of all these conditions when compared with women who weren't in the habit of walking beyond a leisurely pace.

Benefits Beyond The Heart

Nowadays, much of the focus on fitness is about how to exercise to prevent obesity. One school started measuring target heart rate zones as part of an in-school exercise program. And they found it helped more than just the students' physical health.

"[Exercise] should be fun," says principal Craig Rupert of Woodland Elementary School in Kansas, Mo., as he shows off his school's gym, which has been converted into an exercise arcade.

With the help of the national nonprofit group PE4Life, he's pushing to expand physical education. Rupert says by sixth grade, the majority of students do not participate in organized, competitive athletics; their level of activity starts to drop off. The PE4Life model encourages exercise as a form of play.

"It's really about getting the kids to exercise every day," Rupert says.

On a rainy, cold Wednesday afternoon, Rupert shows how his eighth-graders are getting their heart rates up. Student Juan Reynoso cycles through a video racing game called Off-Road.

"The bike is connected to a remote control," Juan explains. "And when I pedal, it makes the car go."

As physical education instructor Bernie Fitzpatrick makes the rounds, she takes a look at Juan's heart rate monitor. Juan and his classmate Kevin Thompson have hit their target zones at about 140 beats per minute. "Keep it up," she says.

"I feel great," says Kevin, as he moves from cycling to a dance game. "And energetic."

Fitzpatrick says the point of wearing the heart-rate monitors is to teach the kids what it feels like to be exercising at the proper pace — about 60 percent of their maximum.

"If you're in the target heart rate zone, you're burning more of the fat you have stored." When people exercise beyond 80 percent of max, the body starts to burn more sugar. "So by keeping them in that, we get them to be more lean and to use up some of that body fat rather than just the candy bar they ate a little while ago."

And, Fitzpatrick says, at Woodland, the students exercise far more frequently than the 50 minutes a week of physical education typical at many schools.

No one has tested the kids at Woodland Elementary to see if the daily exercise has led to specific improvements in academic success, but PE4Life has begun to document academic gains.

The big surprise for administrators at Woodland Elementary: They've noted a significant decrease in aggressive behavior. In-school suspensions have gone down about 60 percent since the program began.

"I've seen that go down quite a bit, because they can expend that energy on the exercise equipment," says Mark Dickerson, who oversees discipline referrals.

"I've always exercised to blow off steam," Dickerson says. But the transformation at the school has surprised him. "I didn't make the connection ... that it can happen to kids, as well."

Changes in the brain during exercise could help explain the students' improved behavior. There's increased blood flow to the prefrontal cortex during and just after exercise:

"They're activating this prefrontal area," says John Ratey, a clinical professor of psychiatry at Harvard Medical School. "One of the jobs [of this part of the brain] is to inhibit the impulsivity coming up from the emotional part of the brain."

This means kids may be more likely to think before they act.

Research in adults has shown exercise can boost blood flow, which can lead to improved focus and attention — not to mention a mood lift. Ratey says researchers are just beginning to nail down the benefits in children.