Accessibility links
Storms In Space Disrupt Travel On Earth Airlines are checking the weather in space these days before taking some of their longest flights. That's because thousands of flights each year now cross the poles, where cosmic storms can interfere with communication and navigation systems, or even expose travelers to worrisome doses of radiation.

That's because more commercial flights are using shortcuts that take them near the North Pole or the South Pole. And in polar regions, flights are vulnerable to cosmic storms that can interfere with communication and navigation systems, or even expose travelers to worrisome doses of radiation.

It Starts With The Sun

Last year, there were more than 7,000 polar flights, compared with just a dozen a decade earlier.

Space weather events usually start on the sun, where eruptions or explosions can send a stream of energy and particles hurtling toward Earth. It can take minutes or days for these solar events to affect the Earth.

This time-lapse video from Jan. 8-10, 2000 shows space storm-inducing activity on the surface of the sun. If you watch the lower left-hand corner of the video, you'll see solar prominences, clouds of gases erupting from the sun that can interfere with communication and navigation systems on Earth.

When solar particles and radiation arrive they are most likely to cause problems at the poles, where the Earth's atmosphere provides less protection. The so-called Northern Lights are a visible sign that particles from the sun are reaching the upper atmosphere.

When the weather in space is bad, you don't want to be in a plane taking a polar route, says Bill Murtagh of the National Oceanic and Atmospheric Administration's Space Weather Prediction Center in Boulder, Colo.

"The air traffic controller could be talking to the pilot one minute and really, literally within a minute or so, that signal can go from quite clear to scratchy noise," Murtagh says. 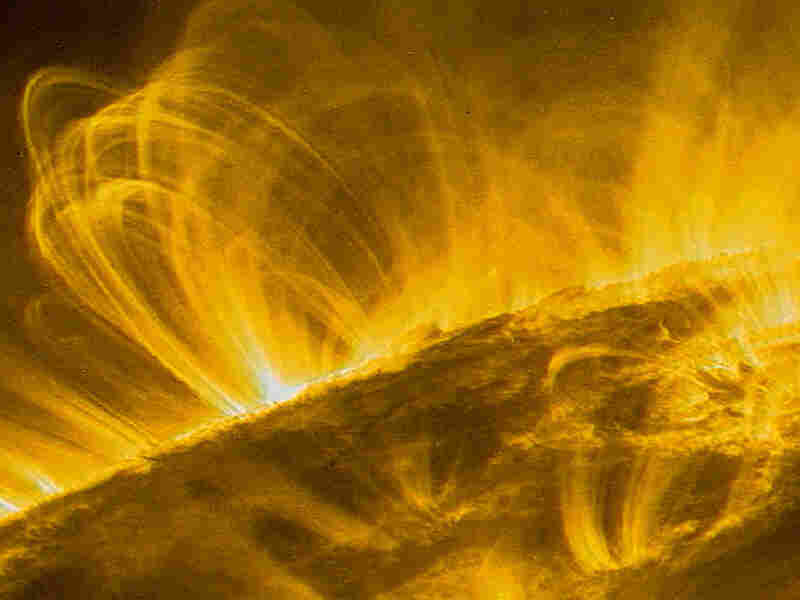 Coronal loops, seen here, are fountains of multimillion-degree gas in the atmosphere of the sun. They are often precursors to solar flares, which emit strong bursts of electromagnetic energy. NASA/AP hide caption 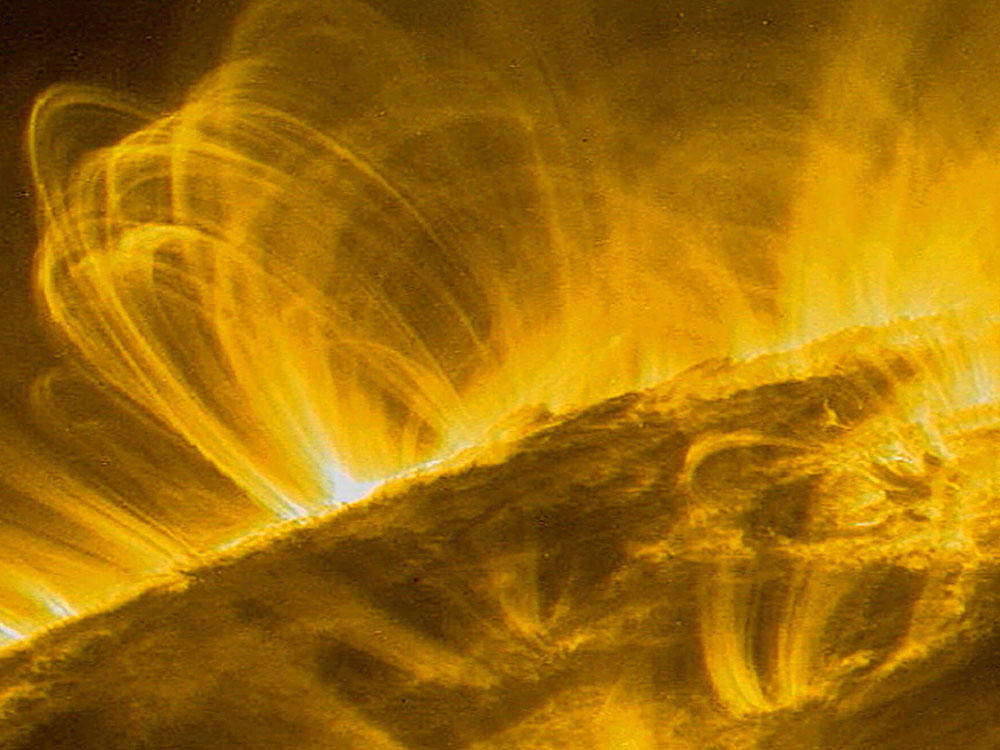 Coronal loops, seen here, are fountains of multimillion-degree gas in the atmosphere of the sun. They are often precursors to solar flares, which emit strong bursts of electromagnetic energy.

Radio interference is just one problem caused by space weather. A burst of energy from a solar flare can knock out GPS navigation systems, Murtagh says. A radiation storm could expose people on a polar flight to the equivalent of a dozen chest X-rays.

Despite the risks, airlines have pursued polar flights aggressively because they let planes fly the shortest path between North America and Asia, or Argentina and New Zealand.

"You're shaving off a couple of hours of flight time, which everyone appreciates," Murtagh says. Passengers reach their destinations sooner and the airlines can save thousands of gallons of fuel.

Most of the growth in transpolar flights has taken place during a period of relatively quiet space weather because the sun has been in an inactive part of its 11-year cycle, Murtagh says.

Right now, the sun is near what's known as the solar minimum, he says. "We're just turning the corner and we'll continue to see an increase in solar activity over the next few years."

With more polar flights each year and the weather in space likely to get worse, it's increasingly likely that air traffic controllers will have to divert flights that are already in the air, says Steven Albersheim, a meteorologist with the Federal Aviation Administration.

The planes won't have enough fuel to complete their trips without an extra stop, Albersheim says. So controllers will have to quickly arrange for them to land at Northern airports in places like Anchorage, Alaska.

No Weather Channel In Space

Last-minute diversions could be avoided if space weather forecasts were as accurate as their earthbound counterparts, Murtagh says. But they're not.

Terrestrial forecasters have had time to develop good models to predict weather days ahead of time. "We are not there yet with the space models," Murtagh says. "Although we are getting there."

One promising model is being developed by researchers at the Space Weather Prediction Center.

They've developed a model that can predict many solar flares two or three days ahead of time by detecting changes in swirls of plasma beneath the surface of the sun. The swirls twist in a distinctive way before a flare sends a burst of energy toward Earth.

"We can pick up about half depending on how big the flares are," says Alysha Reinard, a member of the research team.

That falls well short of what terrestrial forecasters can do, Reinard says. But she says it's a big step toward protecting planes at the poles from bad space weather.

Hubble Telescope Gets Its Groove Back
Rethinking The Human Future In Space Nov. 20, 2009
An Astronomy Book the Blind Can Appreciate Jan. 16, 2008