Accessibility links
What's Behind The New Populism? From the rise of the Tea Party — which is now holding its first convention — to talk of President Obama's new tone, there's been a lot of chatter about populism lately. Historian Michael Kazin says the latest iteration is a problem for Democrats — and for Republicans, too.

What's Behind The New Populism?

What's Behind The New Populism? 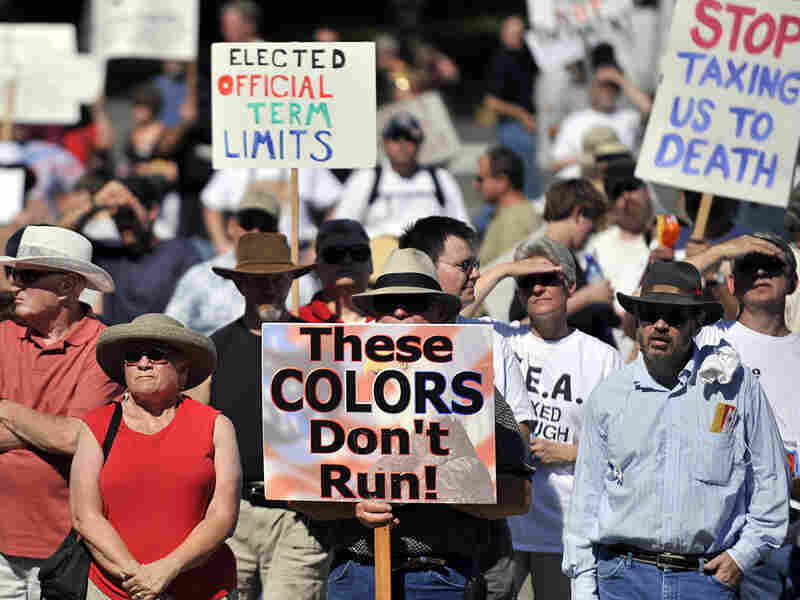 Participants hold up signs at a Tea Party protest at the Oregon State Capitol in September. Historian Michael Kazin says the Tea Party movement is a problem for Democrats and for Republicans, too, who have to channel the discontent to their benefit and not be consumed by it. Matt Gillis/AP hide caption 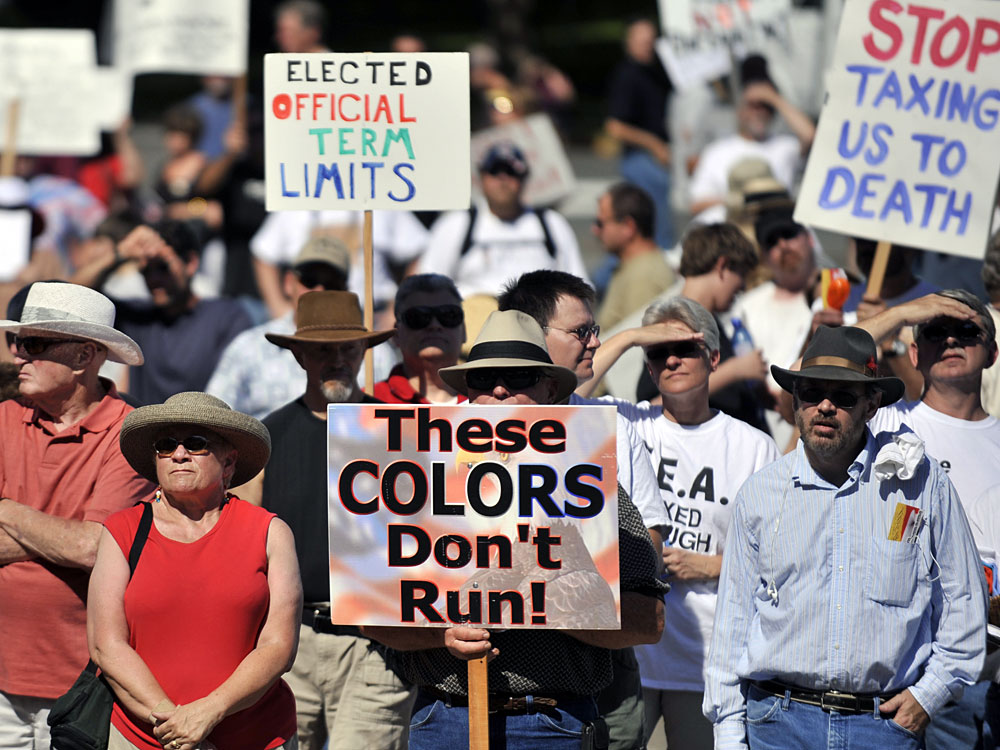 Participants hold up signs at a Tea Party protest at the Oregon State Capitol in September. Historian Michael Kazin says the Tea Party movement is a problem for Democrats and for Republicans, too, who have to channel the discontent to their benefit and not be consumed by it.

There's been a lot of chatter about populism lately: the populist Tea Party movement, which kicked off its first convention Thursday evening in Nashville; President Obama's new "populist tone" during his State of the Union address; populist push-back to Washington schemes.

Bank bailouts, government spending and a proposed expansion of health coverage have all helped fuel America's latest populist streak. So is this democracy in action, as defenders would have it, or the rise of demagoguery, as critics contend?

We asked Michael Kazin, who falls on the side of populist defender, to talk with us about what's going on. Kazin, a Georgetown University history professor, is the author of The Populist Persuasion: An American History, and an expert in U.S. political and social movements.

It is as it has always been: the language of people who see ordinary people as a noble group and the elite class as self-serving. This year, the elites are perceived as Wall Street, the Obama administration and Democrats who want to increase the size of government. The left and right have been arguing in populist terms — whether the big evil is big government or big business — since the 1930s.

Is there a current populist ideal?

There is not one ideal, because there's not one populism. But one shared ideal is that the American people are a virtuous majority who believe the elites should be following through on their promises to make the country prosperous. If not, citizens must organize to humble the elite and dethrone it. It's somewhat of a fiction: There is no "American people," really, and there's no one elite. Conservative populists are exercised about cultural and political elites, and liberals about economical elites.

Why have so-called populist movements in recent years been largely driven by conservatives?

Liberals pretty much had the argument on their side until the 1960s, when conservatives got the upper hand. Liberals were in power, and there was a perception among some that they were going to do a lot of big things and failed: They didn't eliminate poverty or defeat communism in Indochina, for example. They were perceived as having all this power, but failing to make America a better place.

What happened to liberal populist stirrings?

There are a lot of people in the tradition of the left who want Wall Street humbled and regulated. And they have been talking since the early 1970s about how working families have not experienced much of an advance in their incomes since the end of the post-World War II boom, while the rich are getting richer. But the historic liberal populist voice has been labor, and it's so much smaller now, and split, too. The last 40 years have been a more conservative era, and liberals have had to fight against what has become a default assumption of politics: that big government is bad, that unions aren't necessary, and that the only part of government that should really be big is the military.

President Obama took on what many have characterized as a more populist tone in his State of the Union speech. Do you agree?

It was a mixed speech. Sure, he was talking about bankers who should give the taxpayers their money back — and that we should tax them and their bonuses. All those are populist positions. But I don't think he's very comfortable with that language. One of the reasons he's president is the speech he gave at the Democratic convention in Boston in 2004, where he talked about there not being a Red America or a Blue America, but a United States of America. He was basically speaking the language historians would call "progressivism" — not setting up one group against each other. Populism is setting up one group against each other, and if you're not comfortable doing that, you're not comfortable with populism.

So the language of populism is an uncomfortable fit for the president?

For the most part, yes. He's an intellectual, a writer, and someone who wants to further rational dialogue and solutions. That's the tone he likes to set, though once in a while, he wants to scold bankers. People in power can use the language of populism; Reagan and Franklin Roosevelt used it to great effect. But you have to be careful, because Americans don't want presidents to be angry — they are our elected kings, and you don't want a mad king.

How does the Tea Party movement fit in with past populism iterations?

Clearly, the Tea Party movement is the latest in a series of conservative movements. Most would argue there was no mass conservative movement until the 1950s. Since then, you've had people who got behind Barry Goldwater, there's been the Christian right, the tax revolt in California. The Tea Party is just the latest installment: patriotic, anti-tax, mostly Libertarians, and using rhetoric in a way very similar to that of the 1964 Goldwater campaign. The movement is a problem for Democrats, and for Republicans, too, who have to channel the discontent to their benefit and not be consumed by it.

What can these movements accomplish?

They have the potential to affect policy, if not achieve their own particular policy. We've seen lots of populism waves in American history. The Townsend Movement, for example, focused on getting pensions for all elderly who stopped working. Some see populism as demonizing successful people and not offering solutions. There is that aspect of populism sometimes. But if people are quiescent, they aren't going to get their interests served. To say populism is a bad idea is to say democracy is an orderly rational process, and that's not democracy.