Accessibility links
Racing To Gather Haiti's Lost Children The 10 Americans arrested in Haiti for attempting to take 33 orphans out of the earthquake-ravaged nation have stepped into the middle of rising fears that the disaster's most vulnerable victims could fall prey to human traffickers. Meanwhile, aid agencies are rushing to find thousands of children made homeless by the earthquake. 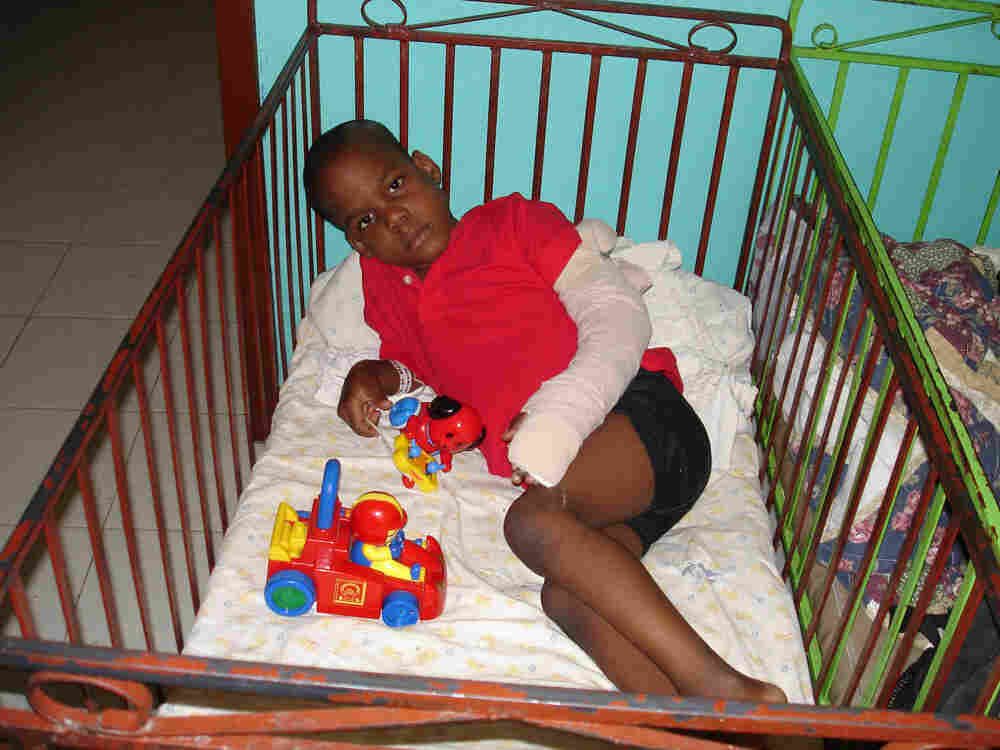 Many of the children displaced by the earthquake aren't orphans. Ten-year-old Harry Bienaime was separated from his mother when he was airlifted for medical treatment. Now he's recuperating at God's Littlest Angels orphanage as the staff searches for his mother. Tamara Keith/NPR hide caption 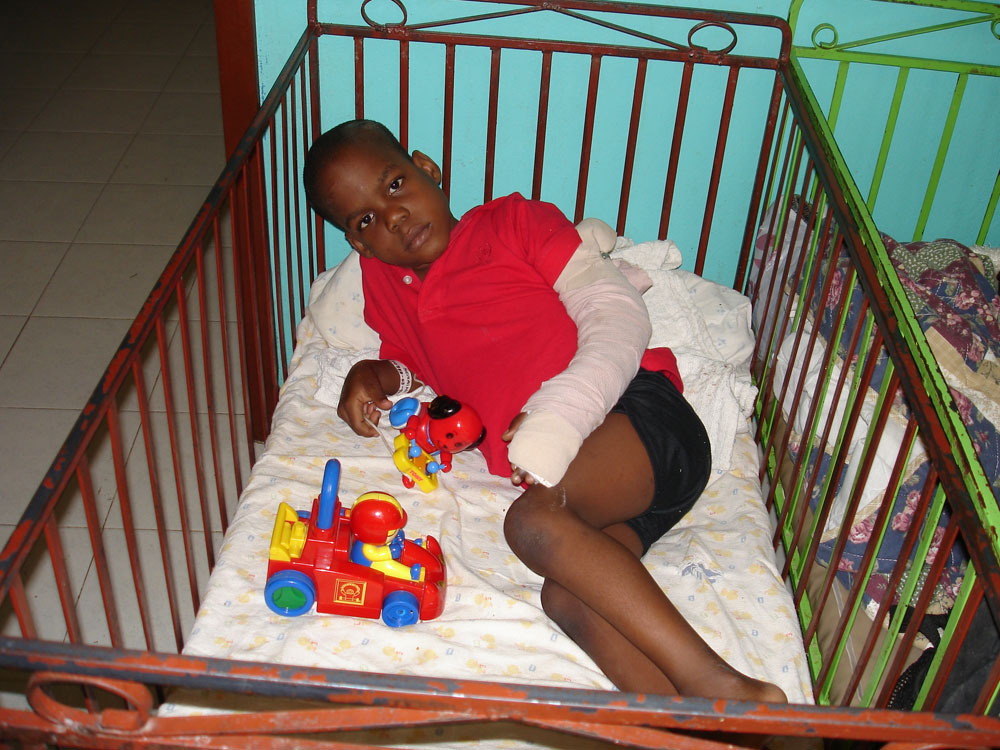 Many of the children displaced by the earthquake aren't orphans. Ten-year-old Harry Bienaime was separated from his mother when he was airlifted for medical treatment. Now he's recuperating at God's Littlest Angels orphanage as the staff searches for his mother.

The 10 Americans arrested in Haiti for attempting to take 33 orphans out of the earthquake-ravaged nation have stepped into the middle of rising fears that the disaster's most vulnerable victims could fall prey to human traffickers. Meanwhile, aid agencies are rushing to find thousands of children made homeless by the earthquake, many of whom are roaming the streets.

Members of two Baptist churches from Idaho say they were on a pre-approved rescue mission to take the children from a severely damaged orphanage in Haiti to the Dominican Republic when they were detained Friday night.

Sean Lankford's wife and daughter were among the church members detained. From his home in Meridian, Idaho, Lankford told NPR the arrests were the result of confusion over the paperwork needed to take the children out of the country.

Earlier this week, the U.S. State Department issued a press release warning of "great risk and higher vulnerability to human trafficking" in Haiti, where uncounted thousands of children have been separated from their parents.

The Haitian government and international aid groups have been so concerned that international adoptions from the country have essentially been halted until things settle down.

Some of the children at risk saw their parents die in the quake. Others are just separated from their families. Still more were living on the streets before the quake.

At the Eben Ezer children's village in the countryside east of Port-au-Prince, new children arrive every day — more than 100 since the earthquake. Kids laugh and yell as they play soccer in a dirt field. It's almost hard to tell how much they've been through.

The orphanage is run by the Missouri-based Global Orphan Project, which operates 18 other orphanages around Haiti. They provide the children with food, education, health care and a Christian upbringing.

Rogelean Fourgaeste is 15 and glistens with sweat after running off the soccer field.

"My dad borrowed $200 from someone, and I was out trying to give it back when the earthquake happened," Fourgaeste says. "When I got back to my house, I saw that it collapsed."

Both his parents died in the quake.

"Since then, I had been searching for help because I was wondering what I should do, because all my family died. I was sleeping on the streets, crying all the time," Fourgaeste says. "I went to General Hospital to find some help."

A doctor there reached out to the Global Orphan Project. When asked what he would have done if they hadn't found him, Fourgaeste reveals a painful reality of life in Haiti for some children.

"If I didn't find those people, maybe I would ask some people to get me into their house so that I could be like their slave, or helping them."

Even before the earthquake, life was hard for many of Haiti's children. UNICEF estimates that tens of thousands were in some form of domestic servitude and nearly 400,000 were orphans.

Now Fourgaeste's future is much brighter. He has an older sister who lives and works in Miami and was recently able to speak with her on the phone. He says she had assumed he was dead, but is now trying to bring him to Miami with her.

The Global Orphan Project is trying to reunite kids with their families as best they can. Johnny Bushico, 10, is on his way to see his mom after the earthquake tore them apart.

"I was on the street close to the national bank, and a building collapsed on my legs," he says.

His mother wasn't there. He ended up at a hospital far from home, only to be moved again to a hospital in the Dominican Republic where he could get better treatment.

"I thought that I would die [that] day, but I did not, because of God," Bushico says.

As the green pickup truck he's riding in pulls up to his neighborhood, children run alongside yelling, "Johnny! Johnny!"

A crowd forms around him as his mother walks up from their house. Kids and adults alike wear a look of amazement, as if they can't believe Bushico is back safely. His mother, Rosette LaTouche, says she's happy.

"I had problems. I couldn't sleep. I was just thinking, 'Where is he?' " LaTouche says.

Global Orphan Project co-founder Beth Fox says she hopes for more happy endings like this one. "There's 100 heartbreaking stories, and it's awesome when you have a victory," she says, "When you're able to reunite a child with his parents.

"That's the greatest gift of what we get to do."

In the mountains above Port-au-Prince, an orphanage called God's Littlest Angels is nearly empty. In the last week and a half, more than 150 kids from here left on chartered planes for the U.S., Canada and the Netherlands. Those children were already in the adoption process.

Since then, the Haitian government has put the brakes on international adoptions. They've been looking for people at the airports and borders who might be attempting to move children.

"We're kind of viewing adoptions as finished at this point until we hear otherwise," says Laurie Bickel, who helps run the orphanage. "Now our goals are changing to just helping these children."

She's expecting the orphanage will be full of kids again soon; this time, children whose lives were turned upside down by the quake. Bickel says she's gotten hundreds of e-mails from prospective parents hoping to adopt a "quake orphan."

"They just don't understand," Bickel says firmly. "They see this on TV, and they say, 'Oh, let us help. We'll take them.' And we're like, 'No, these are not orphans. These are displaced children.' They have families. We just have to find them."

There's no official count on how many children are displaced, and it will likely be months or years before some cases are sorted out; some children are so young, they can't talk yet or say where they lived.

NPR and wire reports contributed to this story.