Accessibility links
Beyonce, Swift Big Winners At Lavish Grammys The "Single Ladies" singer and her songwriters and producers took home six Grammy awards Sunday night in Los Angeles — a record for a female artist. But beleaguered Music City also scored, with both Record of the Year and Album of the Year going to Nashville acts: Kings of Leon and Taylor Swift.

Beyonce and her songwriters and producers were big winners Sunday night in Los Angeles, taking home six Grammy awards — a record for a female artist. Her haul included Song of the Year for "Single Ladies (Put A Ring On It)." But beleaguered Music City also scored a big win. 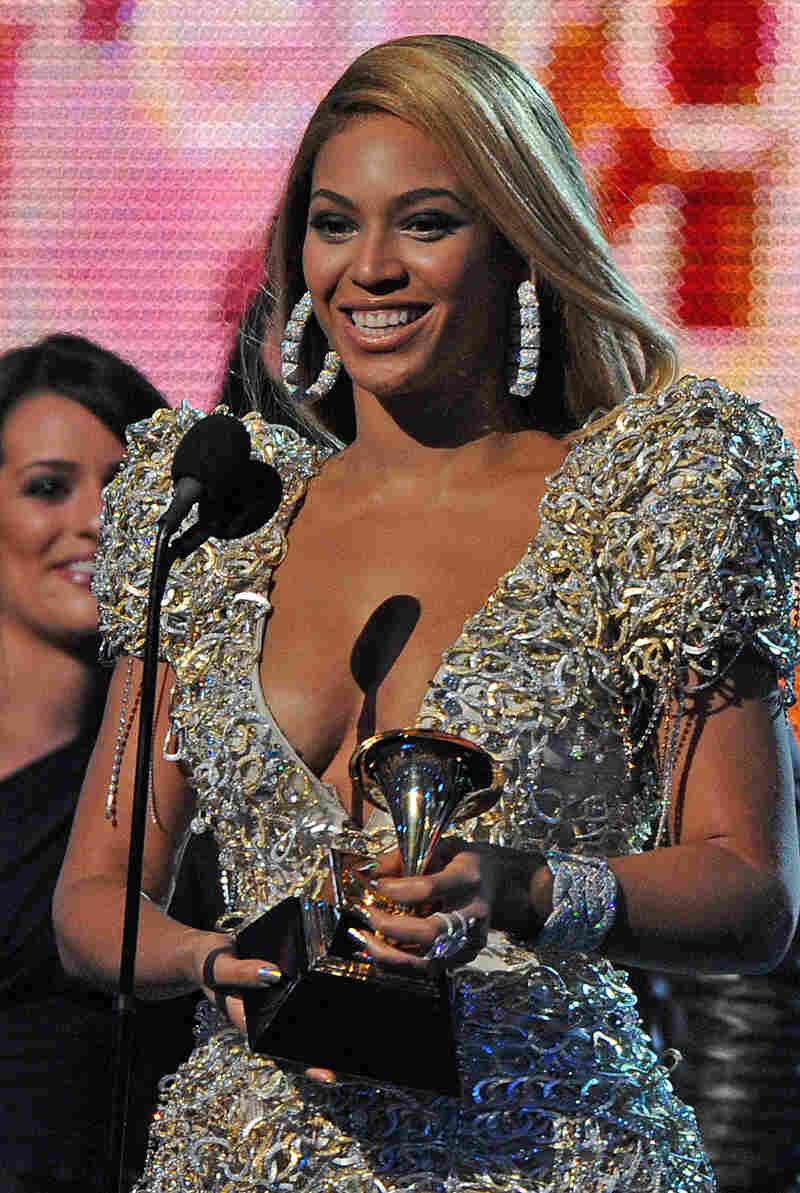 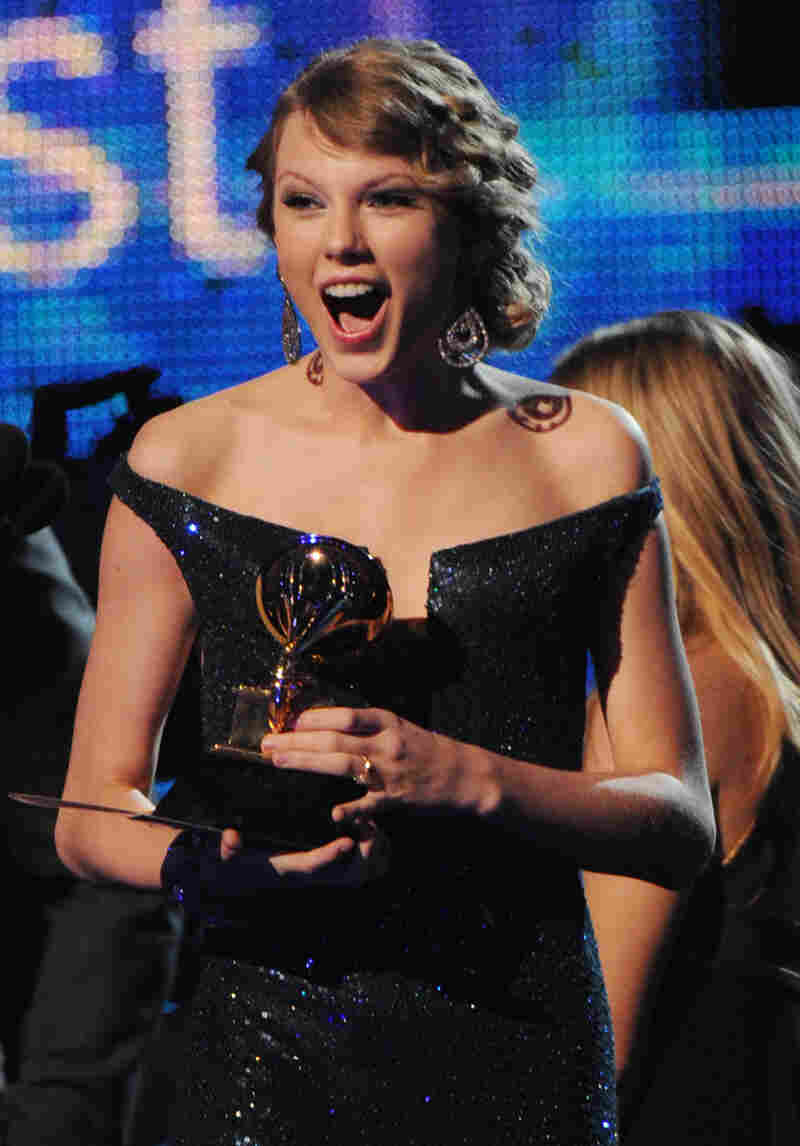 Taylor Swift reacts as she accepts the album of the year award at the Grammy Awards on Sunday in Los Angeles. Robyn Beck/AFP/Getty Images hide caption 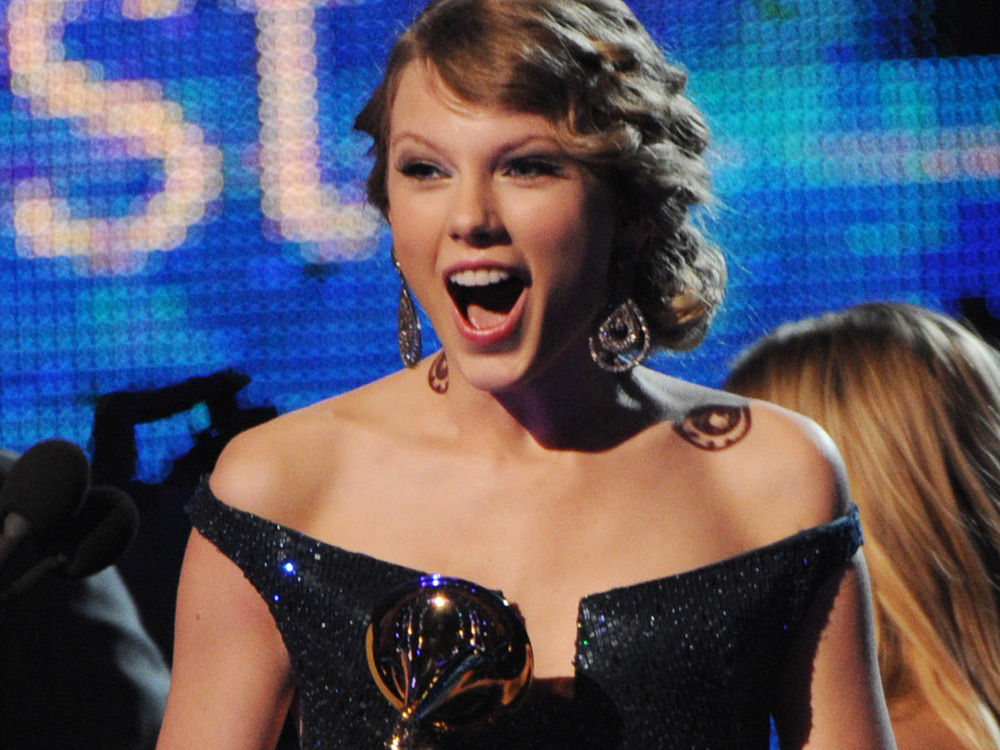 Taylor Swift reacts as she accepts the album of the year award at the Grammy Awards on Sunday in Los Angeles.

After seeming to weather a turbulent decade in the music business, Nashville saw its fortunes fall this past year as big-box retailers drastically reduced shelf space for CDs. But Nashville acts took home two of the top Grammys: Record of the Year and Album of the Year.

The former went to "Use Somebody" by Kings of Leon. Album of the Year — the Grammy's top honor — went to the independently released Fearless by 20-year-old Taylor Swift. It was her fourth Grammy of the day.

"I just hope that you know how much this means to me and to Nathan my producer and to all the musicians you see on this stage that we get to take this back to Nashville," she said.

Fearless was the top-selling album of the year, according to Nielsen SoundScan — ahead of Susan Boyle's much-reported-on I Dreamed a Dream, which did not feature at all in Sunday night's telecast. The seeming oversight raised the ire of the evening's first presenter, Stephen Colbert.

"Remember, you may be the coolest people in the world," he said. "But this year, your industry was saved by a 48-year-old Scottish cat lady in sensible shoes."

In fact, Boyle's album was released after Labor Day — the end of the qualifying period for the Grammys.

When it comes to saving a mainstream music industry fighting for its life in the face of file sharing and recession, the Recording Academy seemed to spare no expense on a 3 1/2-hour telecast. It opened with a lavish production number featuring Lady Gaga, androgynous dancers and Elton John. They were followed a little later by the singer Pink, who wore a sheer bodysuit while performing from a trapezelike contraption above the audience — Pink du Soleil.

The evening's most touching moment came after a 3-D video of the late Michael Jackson's "Earth Song," when his children, Paris and Prince, took the stage and delivered a message: "Our father was always concerned about the planet and humanity. Through all his hard work and dedication, he has helped through many charities and donated to all of them. Through all his songs, the message was simple: love. We will continue to spread his message and help the world. Thank you. We love you, Daddy."

The proceeds from downloads of part of last night's Grammy telecast will go to the Red Cross for Haiti hurricane relief.