Accessibility links
Karzai's Brother Tied To Corrupt Afghan Land Deals In Afghanistan, the theft of public and private land is a growing form of corruption. President Hamid Karzai has vowed to tackle the vexing issue. But one obstacle to his vision is his own brother, who is allegedly at the center of land grabs in Kandahar province. 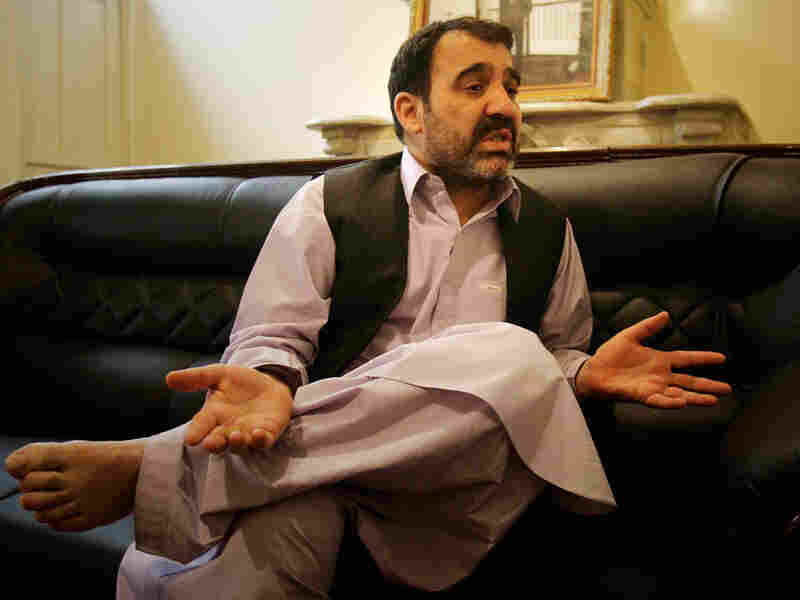 Ahmed Wali Karzai, shown here in October 2009 during an interview with The Associated Press in Kandahar, is battling allegations that he has participated in illegally taking possession of land and water rights in the southern Afghan province. The theft of both private and public lands is a growing problem in Afghanistan. Allauddin Khan/AP hide caption 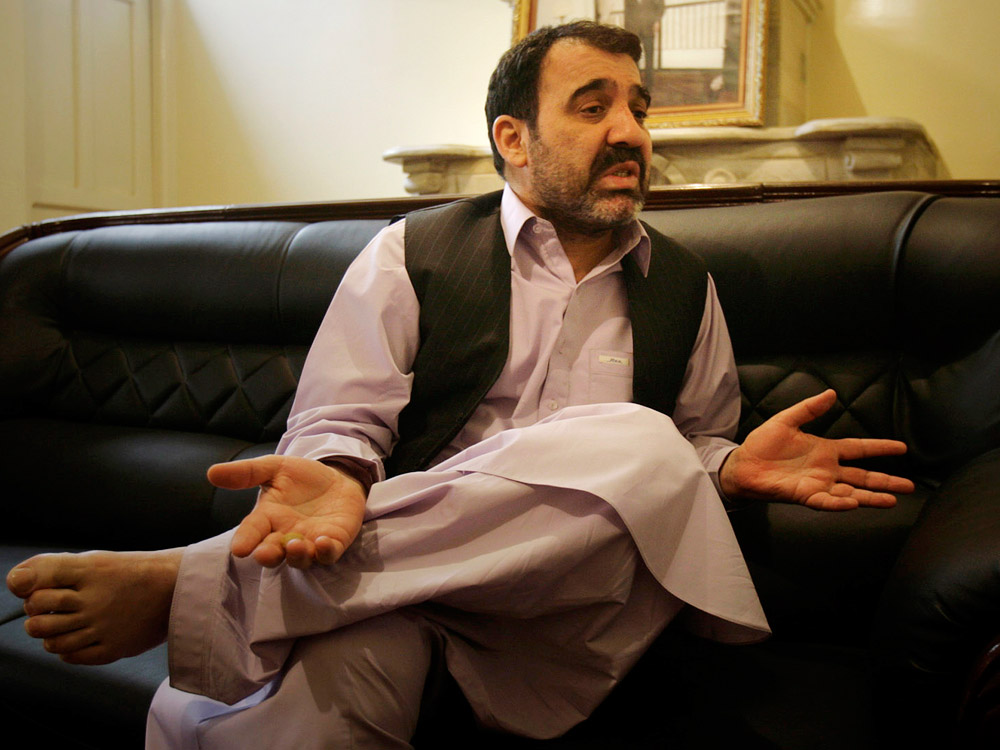 Ahmed Wali Karzai, shown here in October 2009 during an interview with The Associated Press in Kandahar, is battling allegations that he has participated in illegally taking possession of land and water rights in the southern Afghan province. The theft of both private and public lands is a growing problem in Afghanistan.

In Afghanistan, the theft of public and private land is a growing form of corruption. President Hamid Karzai has vowed to tackle the vexing issue.

"We should streamline and rationalize our rules, regulations and procedures, so that government can work smoothly, free of corruption, and without arbitrary decision-making," he said last week in London during a conference on the future of Afghanistan.

But one obstacle to the president's vision is his own brother, who is part of the problem.

The spoils of corruption can be seen several times a week at Kabul's tiny airport: bags of money heading out of the country.

Kirk Meyer is the top American corruption investigator in Afghanistan. He heads a team that works from the U.S. Embassy in Kabul that includes agents from the FBI, Drug Enforcement Administration and Treasury Department.

In one instance, he says, his team was told a high-ranking official took $52 million to Dubai in one trip.

The money leaving Afghanistan, says Meyer and others, is increasingly coming from land grabs. Government officials misuse the law to take control of public and even private land for development — and developers and corrupt officials split the profits, Meyer says.

The Taliban is using the land-grab issue as a recruiting tool.

The land grabs started not long after Karzai came to power six years ago, according to Ahmad Nader Nadery of the Afghan Independent Human Rights Commission.

Some Kabul residents were evicted from their property. And Nadery says the land was made available for a fraction of the cost to the president's political allies.

"It was pretty much given away," Nadery says.

The government set up a commission to investigate, and recommendations were made to compensate those who lost property, says Nadery.

"None of those recommendations of the commission of inquiry was met. The president failed to implement them properly. Those powerful people still [have] those lands," he says.

Complaints to the Human Rights Commission about land grabs have doubled in the past two years. Last year, there were more than 500 complaints from across the country.

U.S. and Afghan officials say that the man at the center of the land grabs in one province is the president's brother, Ahmed Wali Karzai, who chairs the provincial council in Kandahar, in southern Afghanistan.

He has also been accused of using his influence to help opium traffickers, an allegation that he has denied.

A State Department adviser in Kandahar, Todd Greentree, says that portions of land were transferred by signature to Ahmed Wali Karzai, or elements under his control.

Greentree says Ahmed Wali Karzai was able to grab the lands because of his political connections.

"To the extent that you want to question its legitimacy or not, he was operating as a designee of the president, as the president's political representative to the south," Greentree says.

In one case, the provincial council seized land in Kandahar belonging to the Afghan defense ministry; it was developed into a gated residential community.

In another case, the provincial council took over water rights on land in Kandahar from a local tribe.

"This matters because this is the desert," says Greentree. "Water is the most valuable resource after land. Kandahar is Chinatown," he says.

In that Jack Nicholson movie, set in 1930s Los Angeles, powerful figures try to secure water rights on land outside the city. That is akin to what's happening now in Kandahar, says Greentree.

"A political mafia gets control of the water resource and knows where it's going to distribute so they buy up and acquire all the land around it and then become fabulously wealthy and powerful as a result. ... That's the underlying story," he says.

Such stories are leading to rising anger in the Afghan Parliament.

One lawmaker, Sardar Mohammad Rahman Oghli, says through an interpreter that President Karzai's re-election last fall was a victory for corruption.

"I congratulate Karzai's victory to these people, to drug smugglers, to land grabbers," he says.

He doubts the Afghan government will do much about it, and he criticizes the Americans, too.

"If they had been honest in the fight against corruption, they wouldn't have helped a corrupt and incompetent government like Karzai's get elected," he says.