Accessibility links
Conservative Blogger Faces Criticism Over Protege Andrew Breitbart cut his teeth with Matt Drudge on the Drudge Report and Arianna Huffington when he helped her launch The Huffington Post. Now with his own Web site, Breitbart.com, he's criticizing mainstream media over their coverage of James O'Keefe. 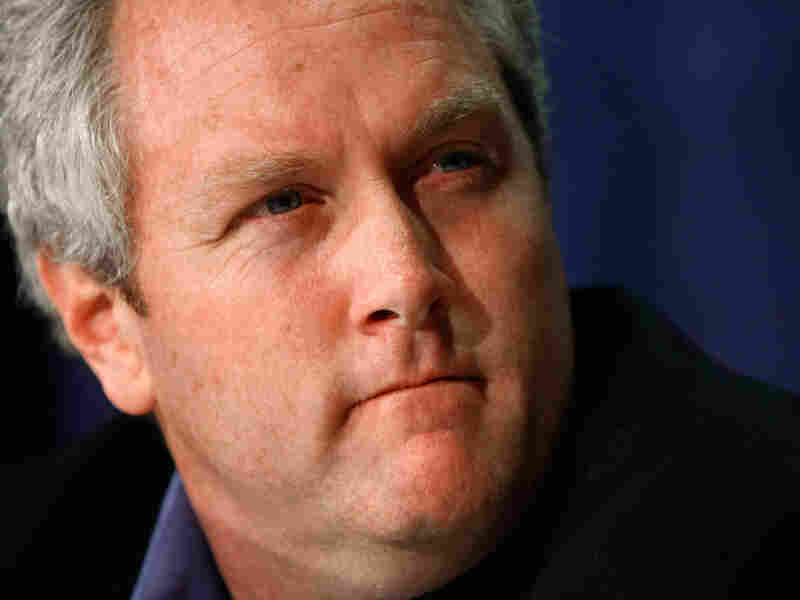 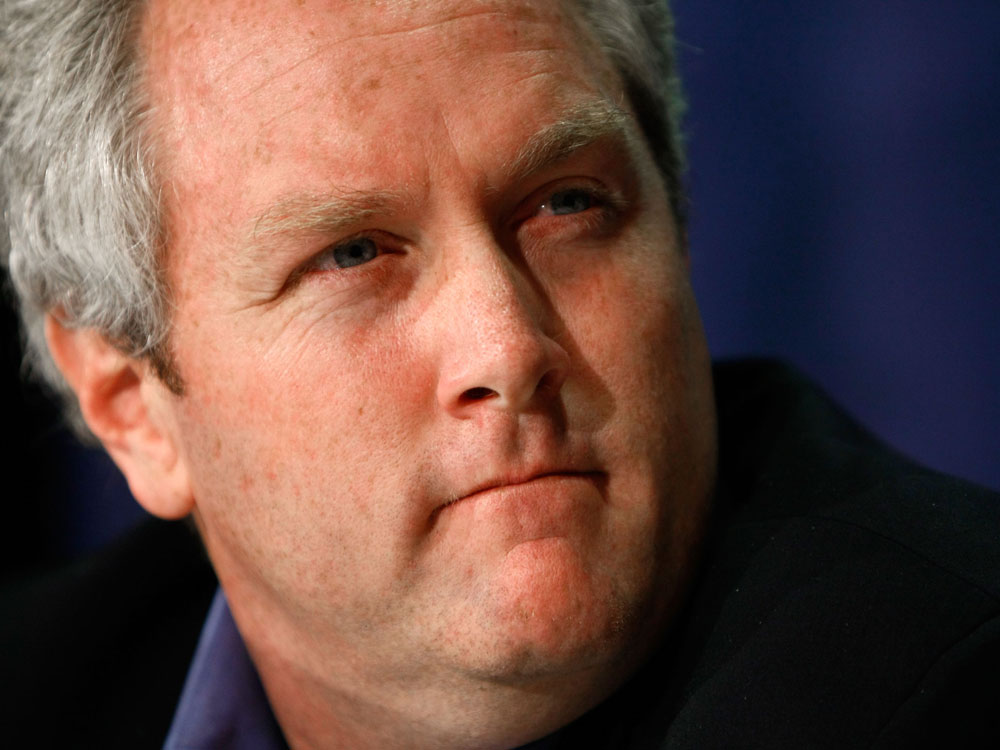 The conservative online news entrepreneur Andrew Breitbart is, for the moment, doing little to dispel stereotypes about bloggers. During a recent visit to his home on the west side of Los Angeles, Breitbart, 41, is working from his own basement. Barefoot. At the beck and call of his own kids.

But that basement is light and airy, with a decent view of the city. A young assistant works there with Breitbart to help funnel wire service stories to Breitbart.com, his main news aggregation site. And his reach, thanks to a brawling rhetorical style and a protege who taped the undercover ACORN videos last year, is only expanding.

Over the past year, Breitbart has hired editors to run a new network of conservative blogs called BigGovernment.com, BigHollywood.com and BigJournalism.com. No matter the focus, the media are a prime target throughout.

He can talk that way for hours — and finds fresh grist all over. The media have devoted intense coverage to the late-January arrest of James O'Keefe, the 25-year-old videographer and conservative provocateur. He was charged with trying to get into Democratic Sen. Mary Landrieu's federal office in New Orleans under false pretenses to commit a felony. And O'Keefe is also under contract to write for BigGovernment.com.

O'Keefe has since said he was acting as a journalist but wanted to embarrass and expose Landrieu as misleading voters when some complained they could not reach her office by phone to express their opposition to a health care bill she supported.

But several news organizations, including The Washington Post, reported that O'Keefe had been charged with wiretapping. And comparisons to a mini-Watergate flew on cable television.

"MSNBC and The Washington Post, you know, go nuts trying to grant terrorists at a time of war all of the rights under the world, while James O'Keefe gets arrested ... and they're already framing him," Breitbart says. "Before all this broke, you were interviewing me about why I do what I do. Don't you think that this perfectly comports with the framework of my life's work — which is that mainstream media is biased?"

Breitbart's claim that the region's federal prosecutor was acting in league with journalists put him on the defensive. The U.S. attorney for the Eastern District of Louisiana, Jim Letten, recused himself from the case, though his office has not stated a reason why. In addition, one of O'Keefe's co-defendants is the son of the acting U.S. attorney for the Western District of Louisiana.

'He Brings The Excitement'

"What Andrew really does better than anybody [is] he brings the excitement," says University of Tennessee law professor Glenn Reynolds, perhaps better known as the blogger behind Instapundit.com. "He is a showman and he is an expert in understanding how media and political people think and turning that into a kind of jujitsu that works to his advantage in a real big way."

Breitbart came by that knowledge through hard-won experience. He's a native Angelino and hung around Hollywood, but was turned off by what he says is its smothering liberalism. He became a lead editor for Matt Drudge on the right-of-center Drudge Report. Through Drudge, he met and worked as a researcher for Arianna Huffington while she was a conservative columnist. That meant he also helped launch the liberal Huffington Post after her political transformation.

He returned to work with Drudge but built up Breitbart.com as a landing spot for people who clicked on many of the Drudge Report's links. He bulked it up with copious copy from news services and a second site with video stories. Nielsen now estimates his monthly audience at more than 3 million unique visitors, roughly the same as for Drudge.

When Breitbart launched BigGovernment.com, he did it using O'Keefe's now infamous undercover ACORN videos. They appeared to show workers for the community activist group aiding a couple who sought to create a ring of underage prostitutes.

"The mainstream media did everything that it could not to report that story, but we knew that going in," Breitbart says. "The entire strategy of dripping out the videos — one after another — waiting for ACORN to lie about it, waiting for mainstream media to ignore it, created an unbelievable pressure in the 'undermedia,' which is AM talk radio and the blogosphere."

A New Kind Of Journalism

He says, and O'Keefe says, they are performing a new kind of journalism. No less a figure than Clark Hoyt, the public editor of The New York Times, rebuked the paper for failing to inform readers promptly about the ACORN videos and the consequences that ensued. But reporters at other outlets have repeatedly questioned O'Keefe's tactics: the deception; the editing choices in the ACORN videos. For instance, he was fooling around on tape in an outrageous pimp get-up but was dressed unremarkably when actually shown inside talking to ACORN workers.

When liberal critics at such outfits as Media Matters or Talking Points Memos raise questions about accuracy and fairness, Breitbart just goes on the offensive.

It all leads Hoyt to some real reservations.

"It is primarily, I believe, aimed at trying to score ideological points," Hoyt says. "It is not about the broader mission that I think organizations, like the Times, set for themselves — which is, I think, broadly informing the public."

Breitbart says he merely has a "dysfunctional" relationship with the mainstream media. His sites rely heavily on it, even as they tear it down.