Accessibility links
Super Bowl XLIV, By The Numerals The Super Bowl has always had a fondness for Roman numerals. Commentator Frank Deford takes a look at noteworthy numbers in pro football — and has a message for anyone who thinks the commercials are more fun than the game. 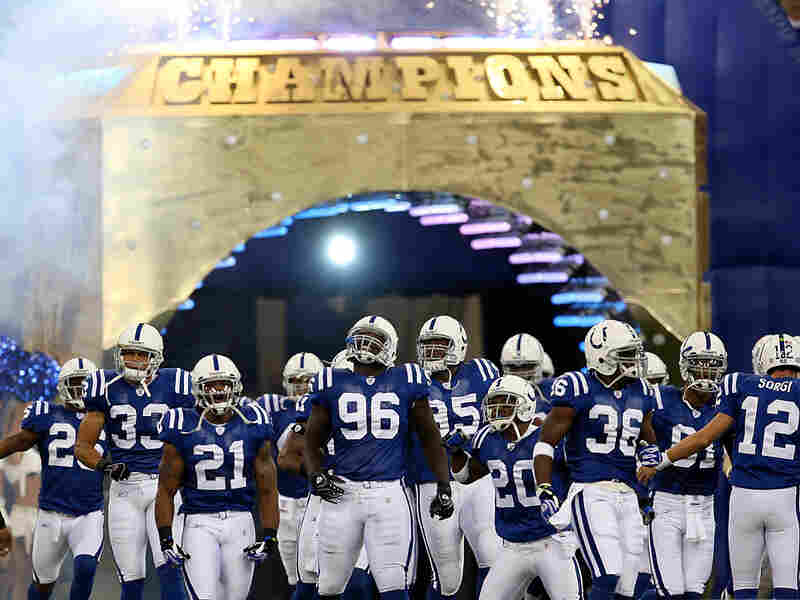 In their first game as Super Bowl champions, the Indianapolis Colts hosted the New Orleans Saints to start the 2007 season in the RCA Dome in Indianapolis. The Colts won, 41-10. Jamie Squire/Getty Images hide caption 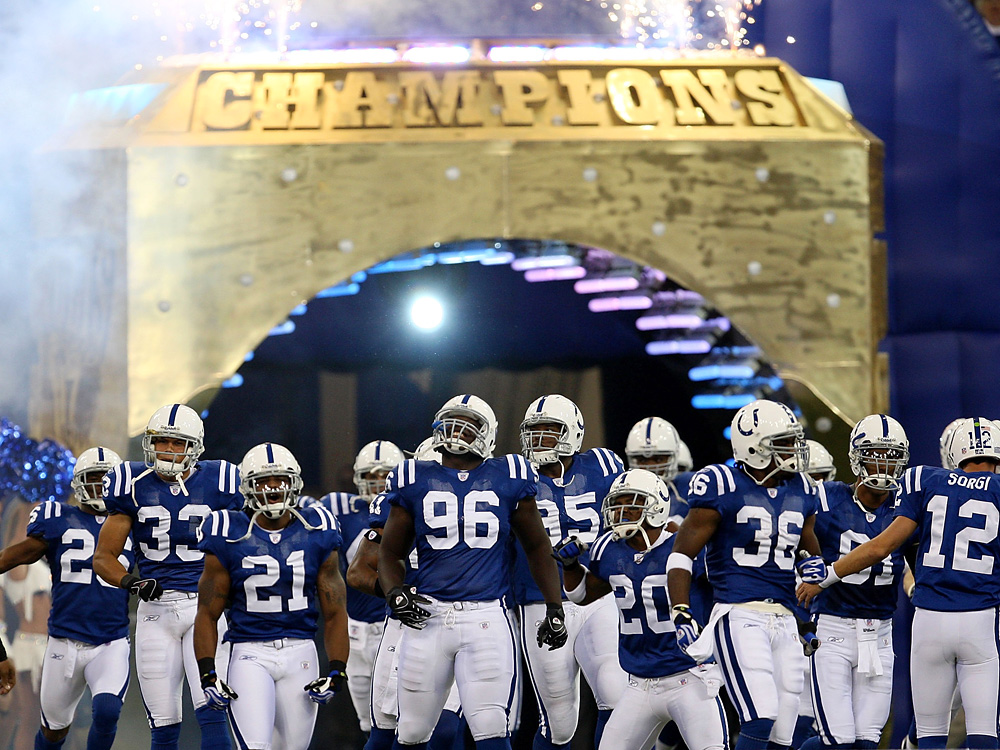 In their first game as Super Bowl champions, the Indianapolis Colts hosted the New Orleans Saints to start the 2007 season in the RCA Dome in Indianapolis. The Colts won, 41-10.

While baseball is the sport most identified — submerged — by numbers, the Super Bowl, as a game, has always been mightily number-conscious since the first day it took on that Roman numeral affectation XLIV — or shall we say quadraginta quattuor — years ago.

Super Bowl numbers are invariably large, huge, monstrous, spectacular. It's always more people watching, more dollars paid, more of everything. The Super Bowl may be many things. Less is more it is not.

So let us look at some intriguing Super Bowl numbers in this year of duo milia decem.

We begin, simply, with unus. Should Peyton Manning lead the Colts to victory, he will absolutely have surpassed Tom Brady as the No. 1 quarterback of this generation. Already, Manning is being unanimously celebrated as the most cerebral quarterback, all time.

Next, novem. This is really an amazing statistic that's been generally overlooked. For the past nine years, nine different teams have represented the National Football Conference in the Super Bowl. What are the odds that in any 16-entity tournament, nine different winners in a row would appear? And none of them, by the way, are the Dallas Cowboys — America's team ... but 21st century limited.

That leads us to quinque semis. That's what Indianapolis is now favored by: 5 1/2 points. The line started lower, at 3 and 4, but it's moved up significantly, in at least large part because the Colts' American Football Conference is so much stronger.

The AFC has, in fact, won five of the last six Super Bowls. Nine NFC champions in a row may be celebrated as parity by a league that worships at that altar, but, where bets are placed, parity equals mediocrity. The AFC seems to be as dominant in the NFL as the American League is in baseball or the Western Conference is in the NBA.

Finally, 51 to 49. Oh, please — I so seldom get the opportunity to speak as Caesar did, so let me say it: quinquaginta unus to undequinquaginta. Thank you. Yes, a Nielsen poll actually purports to say that 51 percent of viewers prefer the Super Bowl commercials to the football. That is so much nonsense, it gives polling a bad name.

In fact, I'm a little tired of the fuss that's annually made over Super Bowl commercials. They're just like so many azaleas at the Masters. Let's stop bloviating about them. They're like the Cowboys — yesterday's fashion.

The only interest I have in the subject is whether Manning will throw more touchdown passes than he appears in commercials.

The truth is, football on television only gets more and more popular. This season has been an absolute television bonanza for the NFL. Listen, if NBC didn't have Sunday Night Football, it couldn't even have afforded to light the studios for Jay Leno and Conan O'Brien.

The Super Bowl is football, and the commercials and the halftime show are bagatelles. When in Rome, whatever. When in America, football on television.