Accessibility links
Movie Review - 'Dear John' - Love In The Time Of The War On Terror Channing Tatum and Amanda Seyfried play wartime lovers keeping the flame alive through handwritten correspondence — at least until that last "Dear John" missive finally comes. But between a series of snoozeworthy directorial gestures and Tatum's wooden performance, the film makes a one-way trip to the dead-letter office.

'Dear John': Love In The Time Of The War On Terror

'Dear John': Love In The Time Of The War On Terror 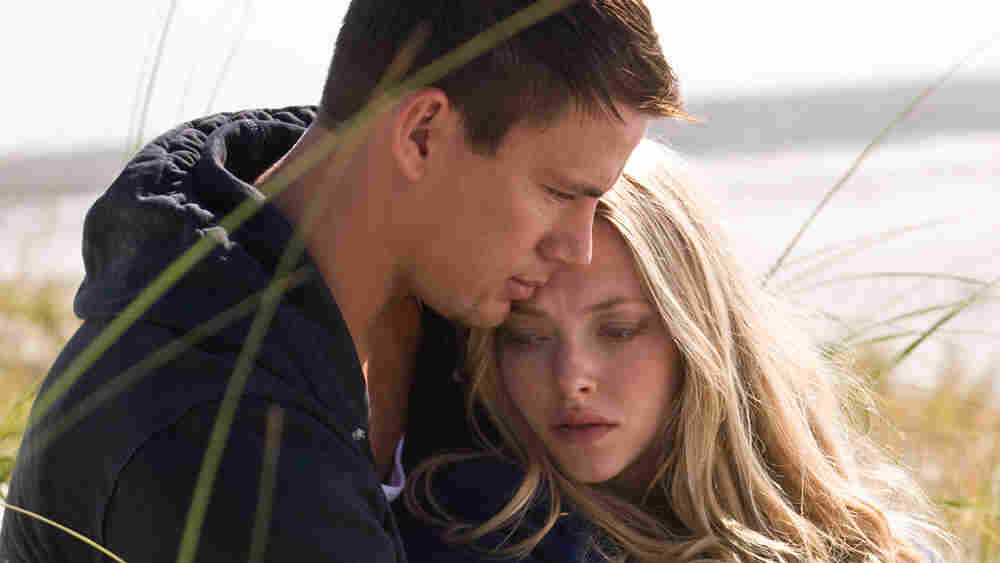 To say that someone dies in a film based on a Nicholas Sparks novel hardly qualifies as a spoiler: Tragic, untimely deaths are the author's stock in trade, particularly those that lead his characters to re-evaluate the nature of life and how to live it — or love and how to give it.

In fact for a writer known for soulful romance, Sparks displays a prodigious morbid streak throughout his work. So when I confirm that someone does die in Dear John, it should be no more surprising than revealing that not everyone survives a Shakespearean tragedy. Unfortunately, there's a lot more flatlining in this movie than the cast.

Chief among the lifeless is the performance of Channing Tatum as the titular John. While his abs perform admirably in the many surfboard-toting scenes on the beaches of Charleston, S.C., his line readings are similarly stiff and flat. It's on those beaches, while on leave from his tour of duty as an Army Special Forces sergeant, that he meets the doe-eyed, golden-hearted Savannah (Amanda Seyfried).

His co-star is sincere and able enough as a young woman caught up in a whirlwind romance, but no one looks good trying to play off a blank wall. This applies not only to Seyfried, but to Henry Thomas, otherwise moving as the father of an autistic child whom Savannah nannys, and to the always reliable Richard Jenkins as John's emotionally distant father.

After two blissful weeks at the beach (and the first in an endless series of wispy montages), Savannah heads back to school while John is deployed to undisclosed overseas locations. He promises to come back to her, she promises to wait, and they both promise to write.

These letters are the only contact that John and Savannah have through much of the film, so they become the backbone of the movie. There are only so many ways to make letter-writing cinematic, and director Lasse Hallstrom explores them all: pens moving purposefully across paper, anxious visits to mailboxes and mailbags, voiceovers reciting letters as the camera focuses on the reader's face, then cutting away to the actions being described.

What starts as a charming anachronism — pens, paper and the postal service in an impersonal digital age — becomes tedious as Hallstrom is reduced to interminable, repetitive montages covering the many months that the pair are apart — months that are extended by the Sept. 11 attacks, which prompt John to re-enlist. When Savannah, lonely and unable to take the distance anymore, finally breaks down and writes a real "Dear John" letter, it comes as a relief that the device has finally met its end.

The inevitable, emotionally wrenching final act is then left for Tatum's John to carry. Unlike Ryan Gosling, who was able in another Sparks adaptation, The Notebook, to lift the material above its inherent maudlin sentimentality, Tatum simply seems bewildered.

Worse, Jamie Linden's indecisive script refuses to commit to either the novel's relatively challenging ending or a more conventional Hollywood revision. Instead, it attempts to avoid offense through a watered-down ambiguity that, like so much of the film, lacks both passion and pulse.