Accessibility links
Rep. Hunter: Repealing 'Don't Ask' Will Hurt Military Rep. Duncan Hunter (R-CA) says repealing the law that bans gays from openly serving in the military will hurt the cohesiveness of the armed forces. Duncan, who served in the Marine Corps in both Afghanistan and Iraq, says most people in the military would be uncomfortable if the "don't ask don't tell" policy were repealed.

Rep. Duncan Hunter (R-CA) says repealing the law that bans gays from openly serving in the military will hurt the cohesiveness of the armed forces. Duncan, who served in the Marine Corps in both Afghanistan and Iraq, says most people in the military would be uncomfortable if the "don't ask don't tell" policy were repealed.

This week, were going to hear a variety of perspectives on what to do with dont ask, dont tell. Tomorrow, well hear from someone who wants to repeal the policy and allow gays to serve openly. Today, we turn to California Congressman Duncan Hunter. He is a Republican and a former U.S. Marine who served both in Afghanistan and Iraq. Congressman Hunter, welcome to the program.

Representative DUNCAN HUNTER (Republican, California): Hey, great to be with you.

BLOCK: You are not in favor of a repeal of dont ask, dont tell. Why not?

Rep. HUNTER: Yeah, thats going to be part of this whole thing. Its not just gays and lesbians. Its a whole gay, lesbian, transgender, bisexual community. If you're going to let anybody no matter what preference - what sexual preference they have that means the military is going to probably let everybody in. Its going to be like civilian life and the I think that that would be detrimental for the military.

BLOCK: Was there anything in your experience with the military in Afghanistan and Iraq that made you think that unit cohesion would be a real issue if gays and lesbians who, I think we can acknowledge, are serving in the military now, just not openly, were to be open about their sexual orientation?

Rep. HUNTER: Yeah, I think that the majority of people in the military are they're young kids. They usually have more conservative families, more conservative backgrounds and I think that it would go against their principles and it would frankly make everybody a little bit uneasy to be in these close situations, how you go into combat, you know, the shower situation, the bathroom situation, just, you know, very mundane details - things that we have men and women separated, you know, because we dont want to have that sexual distraction. That exists for the homosexual aspect of things, too.

Rep. HUNTER: No, but they arent open about it, like you just said. Its like if you want to work for NPR, you dont go to work and on the first day say, hey, I want everybody to know that Im gay. You probably dont care one way or the other as long as they, you know, get their particular job done. I think the military is the same way. Thats why dont ask, dont tell works.

BLOCK: Admiral Mullen, the chairman of the Joint Chiefs, said today in the Senate hearing that hes talked to counterparts in other countries where they do allow gays to serve openly in the military, and there has been no impact, he says, on military effectiveness. What do you think about that?

Rep. HUNTER: Let me answer with this too. Admiral Mullen is the chairman of the Joint Chiefs, a political appointee. And thats fine, he has his opinion. But his opinion is not necessarily that of the chief of staff of the Army or the Marine Corp commandant. But I would say in answer to your particular question, the U.S. is not Canada and were not Great Britain and I would argue that we have a superior military and a much larger military than any other country. Thats why were kind of the world's security force.

BLOCK: Congressman Hunter, I have been looking at some polling a Gallup poll that was done in May of this year - that shows more people in this country, favor allowing openly gay men and lesbian women to serve in the military than five years ago. Do you think the climate has really shifted on this since Congress took it up back in 1993 and that the times have changed?

BLOCK: Congressman Hunter, thank you for talking with us.

Rep. HUNTER: Hey, great to be with you. Thank you.

BLOCK: Duncan Hunter is a Republican congressman from California. And tomorrow, well hear the views of someone who believes gays should be allowed to serve openly in the military. 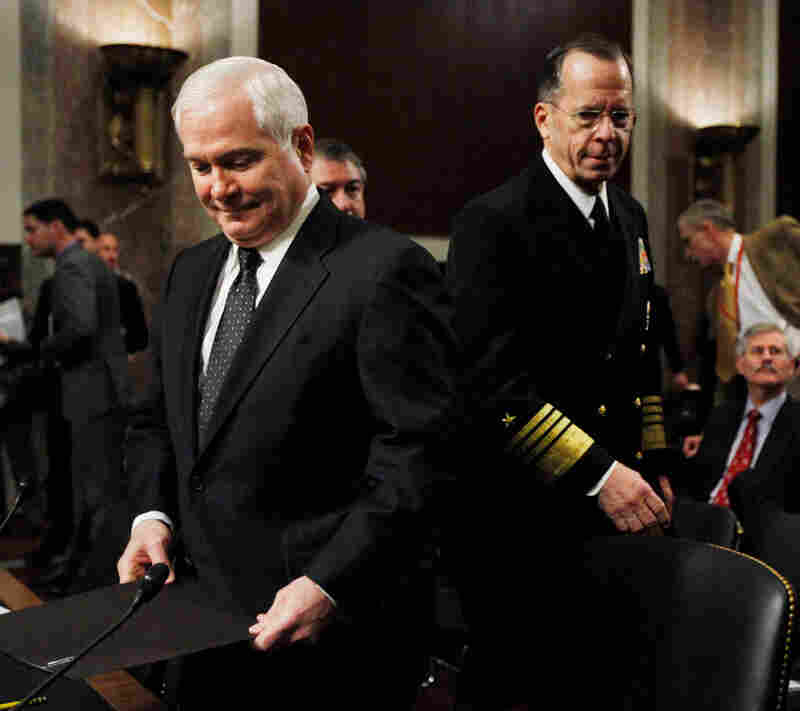 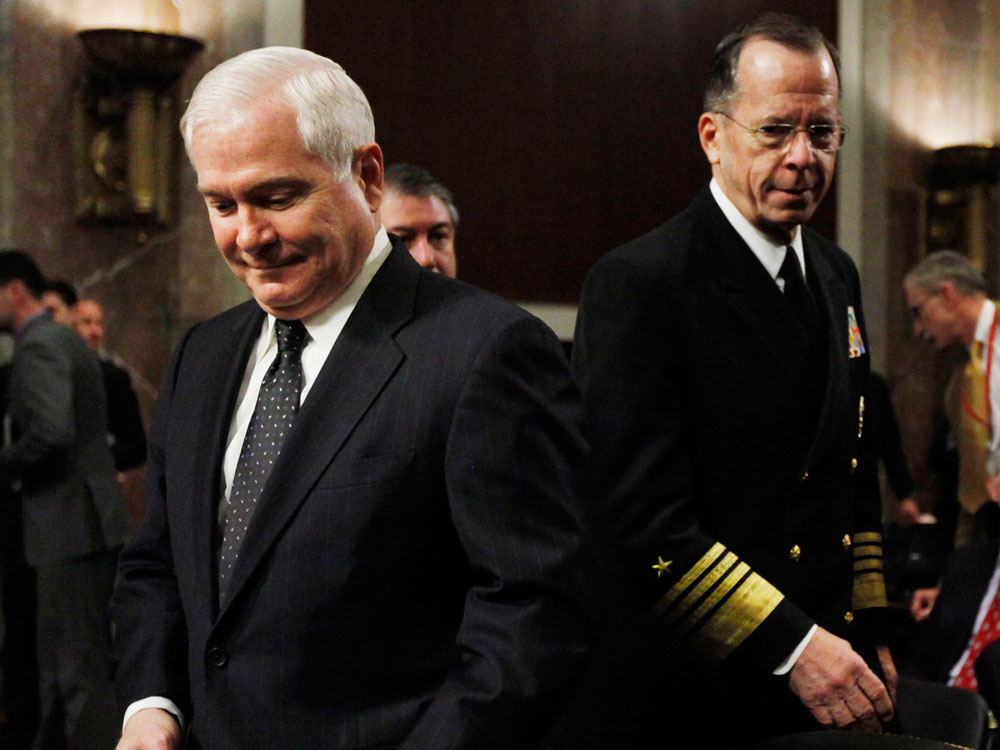 The nation's top uniformed officer told lawmakers on Tuesday that repealing the "don't ask, don't tell" policy that bans openly gay people from serving in the military is "the right thing to do."

"No matter how I look at the issue," Chairman of the Joint Chiefs Adm. Mike Mullen said, "I cannot escape being troubled by the fact that we have in place a policy which forces young men and women to lie about who they are in order to defend their fellow citizens."

His statement followed an announcement that the Pentagon would review the law with an eye to repealing it.

Mullen, who appeared before the Senate Armed Services Committee alongside Defense Secretary Robert Gates, emphasized that he was speaking for himself in calling for an end to the controversial policy, which dates back to 1993.

"For me, personally, it comes down to integrity — theirs as individuals and ours as an institution," Mullen said.

Gates told lawmakers that he has ordered the Pentagon to conduct a yearlong study on revising "don't ask, don't tell", but that in the meantime, he would seek recommendations in the next 45 days to make the existing policy "more appropriate and fair to our men and women in uniform."

Gates said Pentagon General Counsel Jeh Johnson and Gen. Carter Ham, who leads Army forces in Europe, would be in charge of the yearlong assessment.

In his testimony, Mullen said that he and his fellow chiefs of staff "are in complete support of the policy outlined by the secretary."

But Sen. John McCain (R-AZ), the ranking Republican on the panel, fired back, questioning Mullen's statement and asking that each of the chiefs' views be "on the record."

McCain said he was "deeply disappointed" by the decision to launch the study. He called the move "clearly biased," because it presumes the law should be changed. He chastised Gates for trying to change the policy "by fiat."

Gates later told the committee that he agreed that ultimately the policy would have to be changed by Congress. Committee Chairman Sen. Carl Levin suggested that a policy change could be accomplished as an amendment to the Defense Authorization bill.

McCain defended the current policy, saying he was "enormously proud and thankful for every American that chooses to put on a uniform and serve."

"Has this policy been ideal? No, it has not. But it has been effective," the Vietnam veteran and former Republican presidential nominee said. "It is well understood and predominantly supported by our fighting men and women. And it has sustained unit cohesion and unit morale, while still allowing gay and lesbian Americans to serve."

Gay rights activists have supported the president's promise to change the current policy, under which gay and lesbian service members can be dismissed if their sexual orientation is revealed.

Aubrey Sarvis, the executive director of Servicemembers Legal Defense Network, an advocacy group for gay and lesbian troops, lauded Gates' short-term review but said that the larger policy needs to be abolished.

"Yes, we should bring down the number of these discharges to zero," he told NPR. "But ultimately, we will still have a 'don't ask, don't tell' statute on the books unless Congress repeals it.

"While this secretary and this administration may be committed to reducing discharges under 'don't ask, don't tell,' that may not be true of the next secretary or the next administration," he said.

Mullen acknowledged "that there will be some disruption in the force, I cannot deny," adding that the wars in Iraq and Afghanistan were already putting a lot of stress on service members.

"Should the law change, we need to move forward in a way that does not add to that stress," he told the committee.

The senior-level study would recommend the best way to lift the ban, starting from the premise that the goal will take time to accomplish, but that it can be done without harming the capabilities or cohesion of the military force, he said.

The review would consider revisions of housing, benefits and fraternization that would come with allowing gays and lesbians to serve openly.

"This will represent a fundamental change in personnel policies," Gates said.

According to Pentagon figures released Monday, fewer gay and lesbian service members were dismissed under the current policy in 2009 than at any time in the last decade — a trend that started in 2001, as the war on terrorism got under way.

In addition to addressing the military's policy on gays, Gates and Mullen outlined the military's $768 billion budget for 2011, and another $33 billion requested in war spending this year.

With reporting by NPR's Scott Neuman and Tom Bowman. Material from The Associated Press was used in this report.