Accessibility links
Quake Takes Its Toll On Haiti's Burial Rites With an estimated death toll as high as 200,000 in Haiti from the Jan. 12 quake, mass burials have replaced the traditional rituals for honoring the dead. In a land where funeral rites and the spiritual afterlife are central tenets, many Haitians are upset that so many bodies have been buried without ceremony. 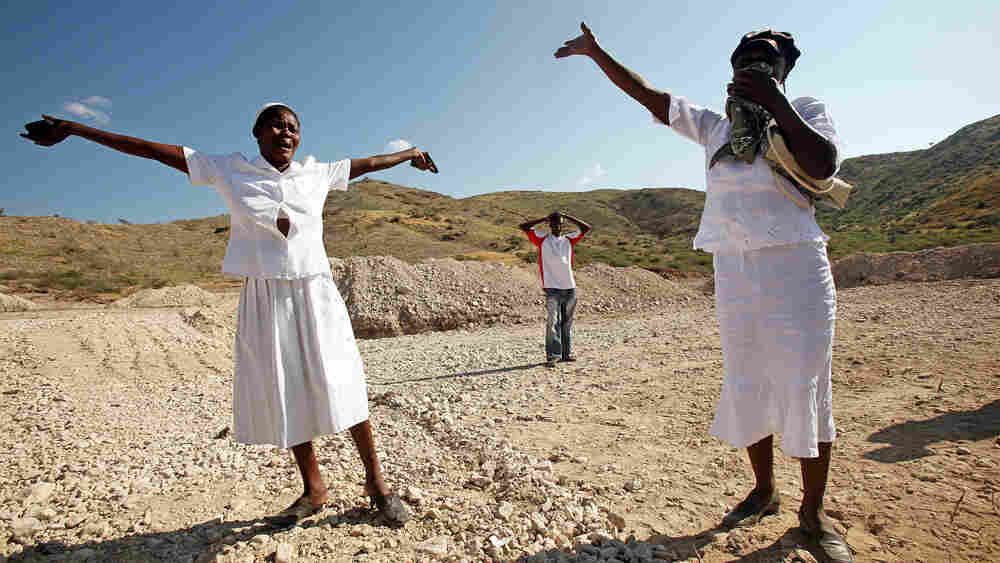 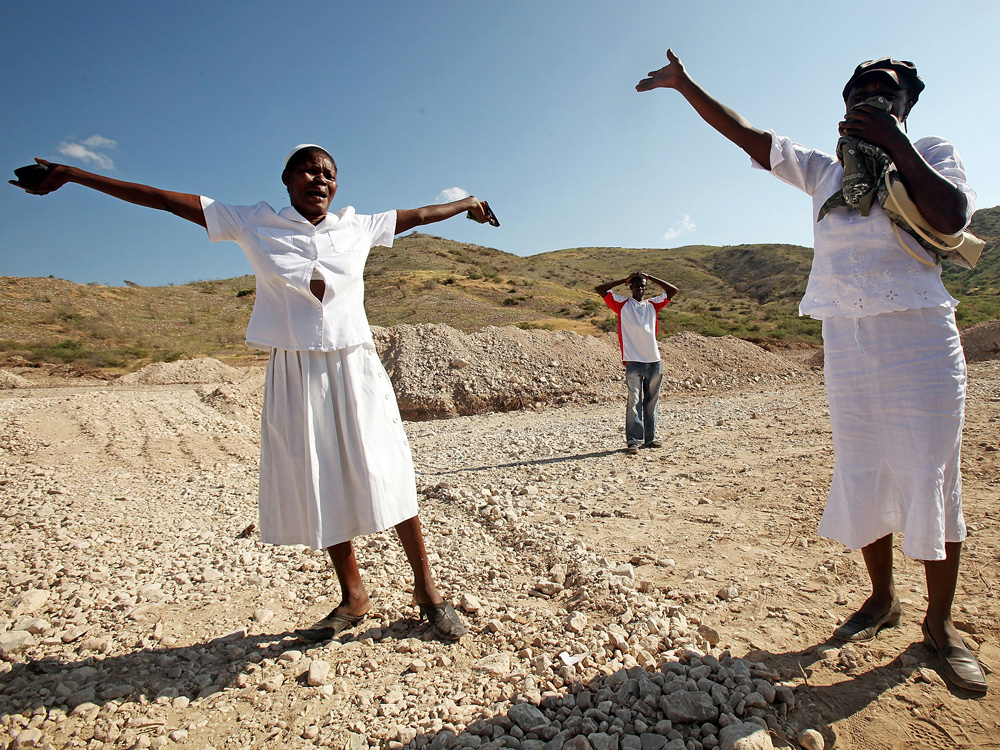 Women mourn at a mass grave site Monday in Titanyen, Haiti. Many Haitians, who honor Voodoo death rituals, are upset by the mass burials.

The number of dead from Haiti's earthquake has been estimated as high as 200,000. That's nearly 7 percent of the population of Port-au-Prince. Imagine the entire population of Des Moines, Iowa, vaporized.

This is a country that observes death with elaborate ceremony. But with most of the bodies hauled to mass graves or still entombed in fallen buildings, normal funeral rituals are impossible.

All over Port-au-Prince, the places that usually play an integral role in burial customs are eerily empty.

'The Only Thing We Have Left Is Our Memory'

Marc Arthur Alcero, who runs two large mortuaries in the Haitian capital, is asked how many funerals he has had in the weeks after the Jan. 12 quake.

"Very few of them, about eight or nine," Alcero says. "That is very, very hard situation for a Haitian to know his wife, his children is dead, and he cannot find the body."

In one of the vast tent camps that fill every park, school ground and open space, a man mashes boiled breadfruit into tom-tom, a stew made with okra that came from Africa during slavery times.

Rosete Dabedy sits quietly nearby, outside her tent made of bedsheets. She says her 22-year-old niece, Darleen, a college student, was crushed inside of her house, and the body was never recovered.

"The only thing we have left is our memory," Dabedy says. "I know where she was when she died, but I know they'll take her body and put it in a mass grave. And I can't even go there to honor her, so it's difficult for us."

A Land Of Spirits

In any culture, it is painful to grieve for a lost loved one when there is no place to remember them. But in this Caribbean nation so densely populated with spirits and the ceremonies that attend them, it is especially disruptive.

In our culture, people honor the dead. When they die, they have a nice ceremony, a lot of services for them. To take all those bodies and put them in mass graves is not good.

In Haiti, the slaves who defeated the French and declared their independence in 1804 kept their African religion. Today, a majority of Haitians observe Voodoo, whose fundamental principle is that everything — from humans to crocodiles to mango trees — has a spirit.

Max Beauvoir is the ati, the "big tree," of the Haitian Voodoo religion. Wearing a tropical shirt, he sits in his garden at his house in Carrefour, which is outside the capital and escaped heavy damage. He is happy to explain the Voodoo wake.

"For nine days we grieve the person, meaning we invite the community to come around to celebrate the departure of the person," Beauvoir says. "So in fact, people are gathered together night and day, they eat and drink together, they chant, they pray. Enemies are also invited, as well. All that bridges the wound that existed between families. And after nine days we do the funeral."

The soul stays underwater for a year and a day, he says, after which time another ceremony is held to pull the dead from the water. Then the reborn spirit goes to live in a big tree, a grotto or some other place to await its reincarnation.

Helping The Dead Move On

Mimerose Beaubrun, the musical partner of the Haitian roots musician Lolo Beaubrun, is a Voodoo practitioner and researcher. She worries that with the sudden and violent deaths of so many, the living are unable to hold the normal ceremonies to help the spirits of the dead move on.

"They have to hold a ceremony to help them," Beaubrun says. "In Creole, the name is dessonet, to let them go through it and accept that the spirit must get out of the body. It's sad because all those people that died, their spirit is still there in their bodies." 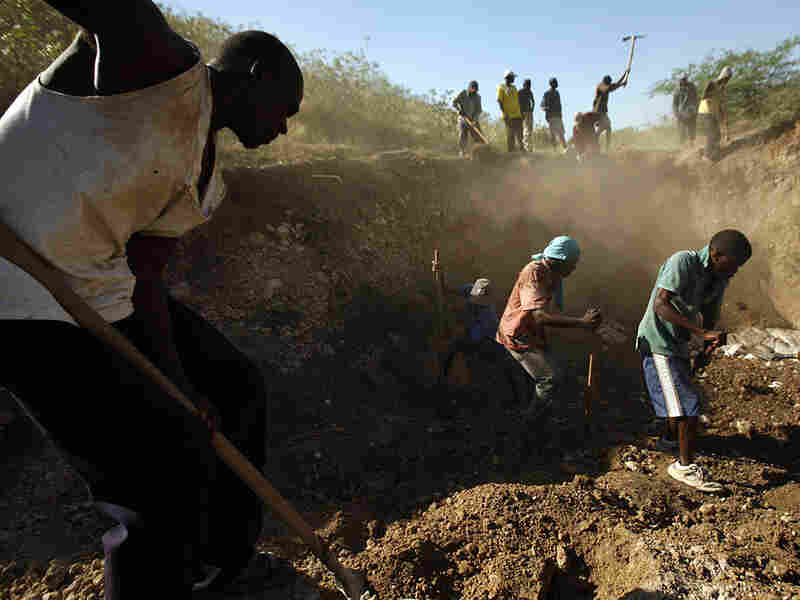 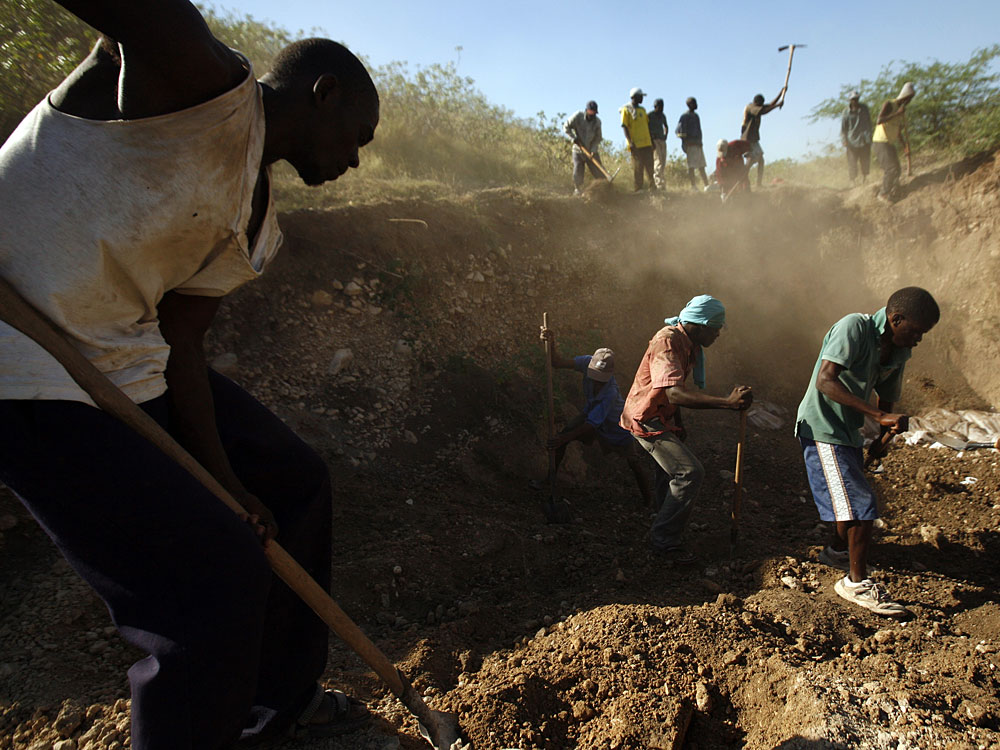 Workers bury unidentified victims of the earthquake in a mass grave outside Port-au-Prince, Haiti, last month.

This is by no means Haiti's first mass calamity. Haitians have suffered repeated catastrophic events — from hurricanes to earthquakes to massacres. Here, death is close at hand.

The Rev. Stephen Davenport, a retired Episcopal priest from Maryland, has been coming to Haiti for 40 years.

"Baptisms, I've done in the mountains for years," Davenport says. "You look at that child's face, his eyes; 50 percent are dead by the age of 5 years old."

"There isn't anybody here who doesn't have a friend or family member — they know somebody who died in this," Davenport says.

"And that's just part of what they're going through," he adds. "But never fear — they will not lose hope. They don't ever give up. It's incredible. Why, I don't know completely. I just learn from them."

"In our culture, people honor the dead," says the Rev. Rival Lucas, St. Pierre's headmaster. "When they die, they have a nice ceremony, a lot of services for them. To take all those bodies and put them in mass graves is not good. It's sad, shocking and degrading. It disrespects the sacredness of a person."

'Somebody Has To Do The Job'

Haiti's fields of death are at the edge of the broken city, overlooking the shimmering Bay of Port-au-Prince. At the foot of a treeless hillside, where goats scavenge, a yellow excavator idles next to the fresh landfill within which rest countless, nameless bodies.

Inside the earthmoving equipment sits a stout woman named Ester — she doesn't want to give her last name. As an employee of the Haitian government's National Equipment Center, she's been out here every day since the earthquake, digging the holes.

Ester says she doesn't know how many bodies are buried here. She says the body trucks used to come all day long; now only two or three come a day. And they're not full. They haul rubble that contains maybe four or five corpses. She sits here all day until quitting time at 6 p.m., waiting for the body trucks.

"Sometimes people come to pray, and there are always a lot of journalists," she says with a slight sneer.

"I'm a human, and it affects me a lot," says Ester when asked what it's like doing this job. "As everyone, I have people I know that I lost. But somebody has to do the job. We don't want the bodies to sit outside.

"We know that it is so disrespectful, since our tradition is not like that," Ester says. "But we have to take the bodies because we can't leave them on the street."

As she finishes the conversation, a dump truck pulls off the highway and kicks up a cloud of white dust as it makes its way toward the grave site.