Accessibility links
Giant Squids Lure California Fishing Enthusiasts Fishing enthusiasts in Southern California are delighted by the unexpected and mysterious appearance of jumbo squids off the coast. They have been catching hundreds of the feisty sea creatures since late last week. Biologists say that over the past decade the giant squids have started swimming up from the Sea of Cortez between Baja and mainland Mexico. The species is considered invasive and aggressive. 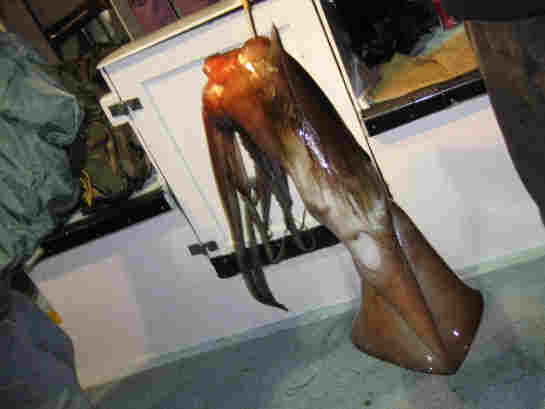 A giant squid caught off the coast of Newport Beach, Calif. Humboldt squids weighing up to 60 pounds have invaded the California waters off Newport Beach and are being caught by sport fishermen by the hundreds. Debra Baer/SCPR hide caption 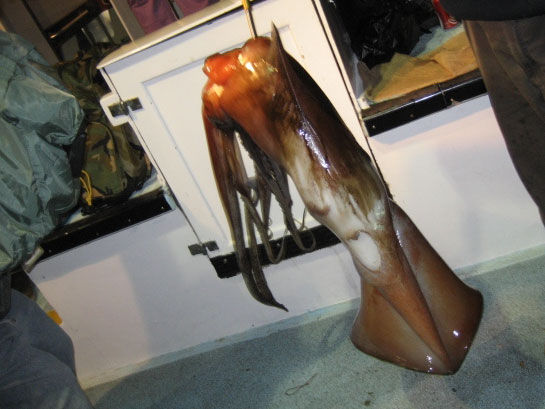 A giant squid caught off the coast of Newport Beach, Calif. Humboldt squids weighing up to 60 pounds have invaded the California waters off Newport Beach and are being caught by sport fishermen by the hundreds.

An invasion of jumbo squids off the Southern California coast has fishing enthusiasts dashing for their boats. The squids are huge — up to 60 pounds and 5 feet long — and, when hooked, they put up a big fight, much to the delight of nighttime anglers.

Nearly 100 people crowded the docks in Newport Beach, Calif., swapping fish tales while waiting to board one of Davey's Locker's sport-fishing boats that have been running every night since the squids invaded Orange County waters.

Walter Martinez was angling for a good squid story to replace that one about a giant crab.

"It was huge," he said of the crab. "There are only few people that were able to see it. You'd probably laugh at me if I told you how big it was. But it snapped my line and he got away."

Jeff Hagge of Riverside, Calif., said he was going for the giant Humboldt squids, which weigh between 20 and 60 pounds. "We're looking forward to that," Hagge said. "We're going to get wet, inked up, have a lot of fun!"

Hagge, who used to work on a commercial boat called Squid-a-Lot, said he's doing it this time for the fun. "Once you do it once, you'll come back over and over," he said. "They only come around between one and three years."

The squids are luring first timers like Sarah Person and her daughters.

"We heard reports of giant squid out there," Person said. "The guy said it was not to be missed, a once-in-a-lifetime opportunity. So we got our girls together and we're here to get some squid."

The girls, and almost everyone else, were dressed in dark colors, expecting to get sprayed with black squid ink as they reeled in the jumbos.

By the time everyone was onboard, they were elbow to elbow along the rails of the 70-foot Western Pride.

Biologists say that over the past decade the giant squids have started swimming up from the Sea of Cortez between Baja and mainland Mexico. The species is considered invasive and aggressive.

Crew member Brownie Gutierrez chopped up baby squids as chum to throw overboard. He said it's just like feeding goldfish in a fishpond. "You get them to come up and eat it, and they start grabbing the hooks," he said.

Gutierrez grabbed a gaffe, a long pole with a big hook, and rushed over to help the angler who got a bite.

The big squid was bright-copper colored. As Gutierrez dropped it on the deck, it expelled water and ink, and its color started to change. Monday's take was 125 jumbo squids, with the largest catch weighing in at about 40 pounds.

Bill Bacheller, who brought in the first catch, said the experience was fun. "There's like a membrane on it," he said. "I take the skin off it — top and bottom, cut 'em in like little french fries, deep fry 'em, Cajun seasoning and a beer.

"They're going to be Super Bowl appetizer."