Accessibility links
Who Dat?!: Songs For The New Orleans Saints When the Saints captured the NFC Championship two weeks ago, music roared from every neighborhood and spontaneous brass-band parades shut down streets: New Orleans rhythms exploded across the city in a way that seemed natural for celebrations of football glory. Now, you can hear 10 songs which typify the music in the New Orleans air right now. 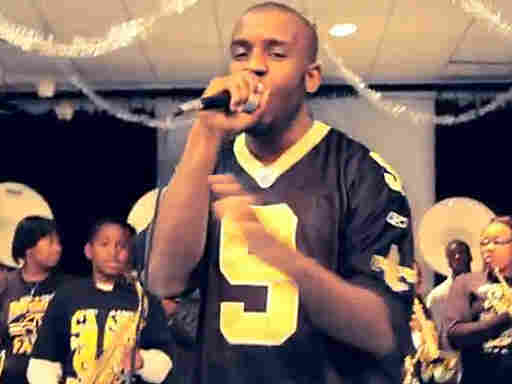 K. Gates, here in a still from the video for "Black & Gold (Who Dat!!)," also goes by the name The New Orleans Savoir. courtesy of the artist hide caption

If fight songs decided football championships, the New Orleans Saints would be 27-point favorites, while the Indianapolis Colts (who have most recently inspired the Baltimore Colts fight song) would be scrappy underdogs. When the Saints captured the NFC Championship two weeks ago, music roared from every neighborhood and spontaneous brass-band parades shut down streets: New Orleans rhythms exploded across the city in a way that just seemed natural for celebrations of football glory.

Conversely, when Prince penned a tune lauding his hometown Minneapolis Vikings, the result was "Purple and Gold": plodding, strangely sexy and ironic, with uncomfortable references to religious music. Yes, it was a Prince song — with the lead vocal double-recorded in falsetto, no less — but it didn't work as a football tune.

The Vikings lost. No, Prince had nothing to do with it, but his "Purple and Gold" illustrated an important point. Football and the successful songs that celebrate football are not about anything but the moment — a blustery, idiotic, immediate and childlike moment. This is why New Orleans, with its Bourbon Street, jazz and Southern-fried hip-hop, might be the perfect football town. (Okay, take away 42 years of mostly unbearable, losing football, and then New Orleans is the perfect football town.)

Americans lose themselves in football much like they do on certain weekend trips to New Orleans. And it's this escapist, feel-good beat — the music of the city — that's provided the soundtrack to the improbable 2009-10 Saints. Internet search engines find at least 80 individual Saints-themed songs, and many of them are streaming at the New Orleans Times-Picayune's site. Listen here to some of the best, and tell us about more Saints songs — and Colts songs, of course — in the comments section below. 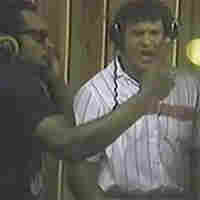 The Saints have spawned many miracles: After the victory that sent them to the Super Bowl this year, locals poured into Bourbon Street, easily outnumbering tourists. Many were singing "When the Saints Go Marching In," a song typically loved more by the convention bureau than actual New Orleanians. This version mixes "When the Saints Go Marching In" with the "Who dat say dey gonna beat dem Saints?" chant. 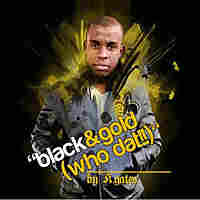 Atlanta-based hip-hop duo The Ying Yang Twins improbably invaded many NFL stadiums with its "Halftime (Stand Up and Get Crunk)" in 2004. New Orleans MC K. Gates (a.k.a. The New Orleans Savior) swings the "Who Dat" chant across the Twins' growling "Halftime" beat, evoking second lines and high-school bands during Mardi Gras. Recently, the NFL caused a controversy by sending cease-and-desist letters to local T-shirt shops that sold merchandise with the words "Who Dat" on it. But "Who Dat" goes back at least 112 years to the 1898 song by E.E. Rice: "Who Dat Say Chicken in Dis Crowd."

This song is available from iTunes and Amazon MP3. 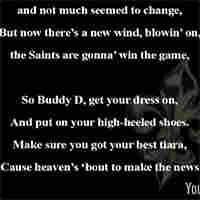 Heaven's 'Bout To Make The News

Heaven's 'Bout To Make The News

This song is available for free download from Jep Epstein's Web site. 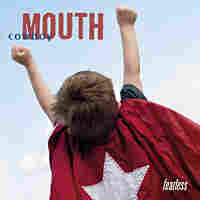 I Believe (A Tribute To The New Orleans Saints)

Pop music, sparkly with strange, mystical lyrics ("I believe ... that little children should occasionally misbehave"), this "love letter to the Saints" is currently playing in a continuous loop over the local airwaves. "Step inside this endless moment for a subtle touch of grace," singer Fred LeBlanc croons. "I've always found my strength inside the act of faith." Though overblown sports narratives usually justify eye-rolling, the Saints' miracle season has, for many Katrina-fatigued residents, transcended football.

This song is available at Valley Entertainment's site and iTunes. 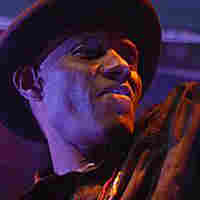 What You Think About Them Saints, They're Too Damn Good

This song's barrelhouse piano and classic funky beat is typical of the music that powers parades and barroom dancing across southern Louisiana. 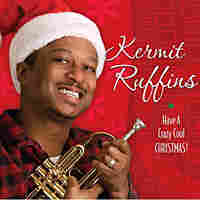 Kermit Ruffins, wildly famous in New Orleans, has a mammoth fleur-de-lis tattooed across his chest. Traditional jazz players from other cities can be a dour bunch, but if anyone embodies the spirit of a New Orleans party, it's Ruffins.

You can watch the video for "A Saints Christmas" on YouTube. 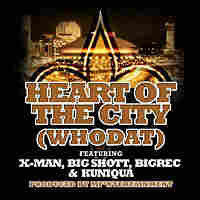 Heart of the City (Who Dat)

Heart of the City (Who Dat)

This song is built around the pregame cheer created by New Orleans Saints quarterback Drew Brees. According to The Times-Picayune, Brees based it on a Marine Corps running cadence he heard while on a USO Tour of Guantanamo Bay, Cuba.

This album is available from iTunes and Amazon MP3.

Watch the video for "Heart of the City (Who Dat)" on YouTube. 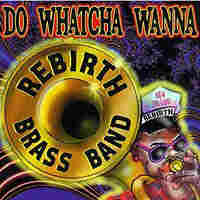 Not a Saints song. Doesn't even mention the Saints -- or football -- but it's the unofficial "We're having a great time" party song of New Orleans, which means it's been blaring from every car, club and brass band during the weeks leading up to the Super Bowl. Rebirth does indeed have a Saints song or two. According to Allison Miner's liner notes for Rebirth Kickin' It Live, the band spontaneously created the song "Talk That S--- Now" following a Saints home victory over Atlanta, and recently recorded "Black & Gold Super Bowl." 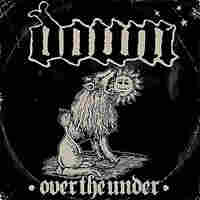 On March The Saints

On March The Saints

New Orleans has a serious hardcore and heavy-metal scene. Down's drummer, Jimmy Bower, is from one of the most infamous New Orleans hardcore bands, Eyehategod. "Accept eccentric faith, to need religion / To sit high among the elect / On march the Saints," the band sings.

This song is available for free download from Down's Web site. 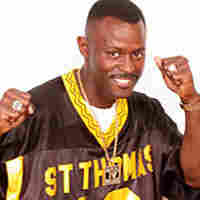 Finally, a video with poor sound quality, taken from the audience at One Eyed Jacks in the French Quarter. DJ Jubilee is one of the powerhouses behind the highly specialized and hyperactive form of dance music called New Orleans Bounce. It's hard to tell what the circumstances are, but he's on stage raving "Who Dat," while the hardcore band Eyehategod is setting up. A small party erupts as another unidentified participant hums the bass line to "Do Whatcha Wanna." What follows is less than musically mind-blowing, but a good example of the citywide party New Orleans has been enjoying all winter.