Accessibility links
Mexico Suffers As U.S. Economy Struggles The lagging U.S. economy continues to take its toll on Mexican migrant workers, who are sending less money home — 16 percent less in 2009. The decrease in remittances is affecting the economies of many Mexican states, especially rural areas. In Hidalgo, abandoned houses and half-finished projects reflect the downturn. 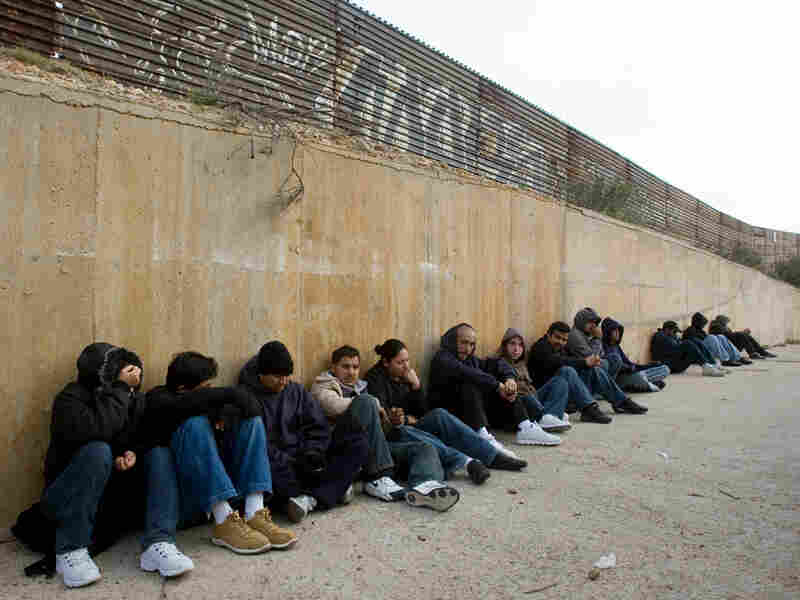 Mexicans preparing to cross illegally into the U.S. usually wait for nightfall. Here, a group sits along the border fence in Tijuana, Mexico, in 2008. Dario Lopez-Mills/AP hide caption 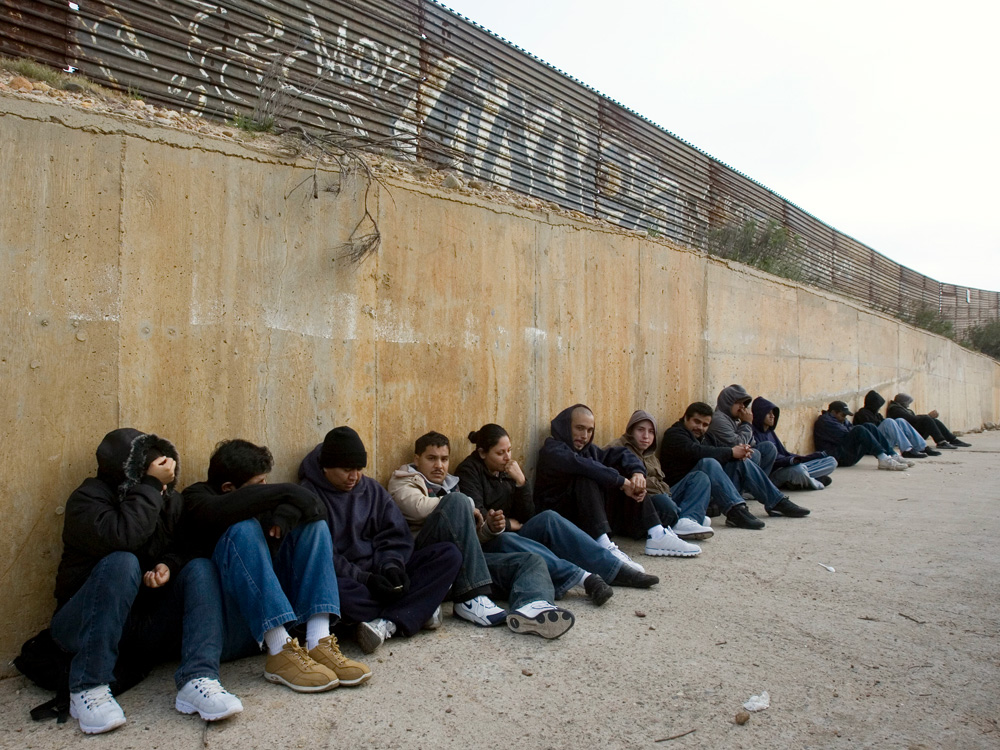 Mexicans preparing to cross illegally into the U.S. usually wait for nightfall. Here, a group sits along the border fence in Tijuana, Mexico, in 2008.

In 2009, Mexico experienced the largest decrease in money sent home by migrants ever recorded by Mexico's central bank. Remittances from migrants working primarily in the United States dropped by nearly 16 percent.

Mexico is heavily dependent on these cash transfers, which total billions of dollars and represent the country's second-largest source of income after oil exports. The decline hit rural areas particularly hard.

In some villages in the central Mexican state of Hidalgo, almost half the residents live and work in the United States.

The village of El Alberto, tucked into the rugged, cactus-covered hills of Hidalgo, is miles from the nearest city. In El Alberto, large American-style homes that could have been erected in subdivisions outside St. Louis or Atlanta sit next to cinder-block shacks.

But many of the big houses aren't finished — some are just shells, and some are abandoned construction sites. These houses represent the dreams of Mexican migrants, and for many families the dreams are currently on hold.

Remittances are very important here. It's the base of the economy in this area.

Federico Ramon looks after two unfinished properties that were started by his brothers.

"They're in this state because there isn't the money to finish them," he says.

There are other half-finished projects all around Ramon.

"People leave their houses to try to make money and sustain their families," Ramon says. "Here in Mexico there's nothing. There's no way to make a living here."

Ramon's two brothers and his 18-year-old son are in Las Vegas. But he says they haven't been getting much work lately.

Across the ravine from Ramon is a concrete shell of a split-level ranch house. Just up the dirt road is a massive project with a drive-in garage, tinted windows and colonnades on either side of the entryway. But rusting fingers of rebar poke up from the structure and are waiting for a second floor that still hasn't been built.

Residents say that as the U.S. economy slipped into recession, construction in El Alberto ground to a halt.

Last year, Mexican migrants sent home $21 billion, according to Mexico's central bank. That's off from a peak of $26 billion sent in 2007.

Carmen Maqueda San Juan runs a small grocery store in El Alberto. She says all six of her children are on "the other side." Of the six, only her daughter still has steady work as a maid.

Maqueda says her kids used to send money to her, but now she's lucky if she gets a phone call.

"They say there's no work," she says. "Sometimes, once a week or for part of a day, they work. But that's it."

Local officials estimate that more than 90 percent of the migrants from this part of Hidalgo are in the U.S. illegally.

There's no shame here in crossing the border illicitly to look for work.

Still Looking For Work In U.S.

Israel Pioquinto Rafael, the head of migrant services for the nearby city of Ixmiquilpan, estimates that 30 to 40 percent of the local population works in the U.S.

"Remittances are very important here," Pioquinto says. "It's the base of the economy in this area."

For decades, cash sent home from migrants has been propping up remote villages throughout Mexico and Central America.

The drop in this source of cash, Pioquinto says, affects the entire community. People have less money to spend in the markets. Even a local mariachi band says its bookings fell sharply last year as residents have fewer pesos in their pockets.

"We were expecting that a lot of people were going to come back from the United States to Mexico," Pioquinto says. "But it hasn't really happened. Yes, some came back because at times they didn't have anything to eat. But many have decided to stay and hope that the U.S. economy recovers."

He says that 10 years ago, people would have returned to Hidalgo and waited out the economic downturn with their families in Mexico. But with the tighter controls along the border, migrant workers don't want to risk returning home and then being stuck on the outside when the U.S. economy does come back.