Accessibility links
Consumers Try To Make Sense Of Toyota Recalls With Toyota struggling to deal with two high-profile recalls and new questions about brakes in the 2010 Prius, consumers are trying to understand just how serious the problems really are. 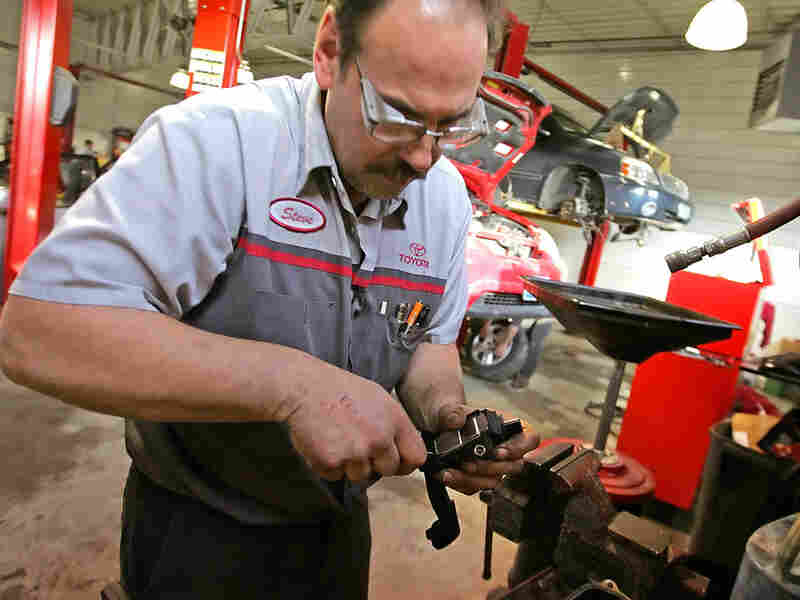 Service technician Steve Newton installs a shim about the size of a postage stamp into the gas pedal assembly of a Toyota Avalon at a Toyota dealership in Dubuque, Iowa. Jeremy Portje/Telegraph Herald/AP hide caption 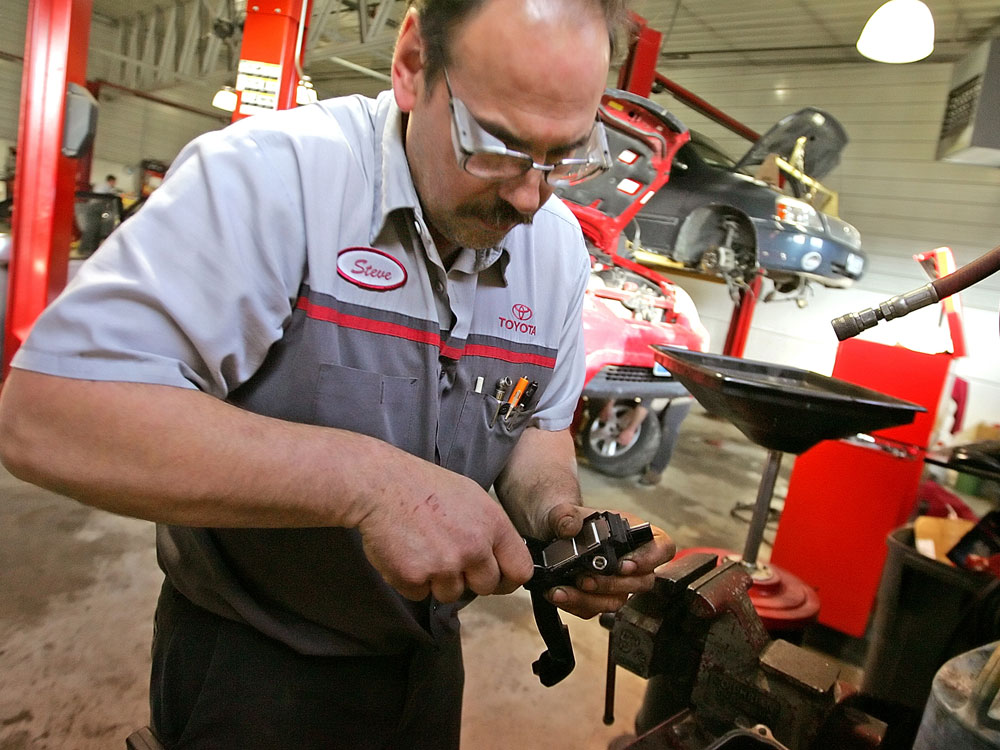 Service technician Steve Newton installs a shim about the size of a postage stamp into the gas pedal assembly of a Toyota Avalon at a Toyota dealership in Dubuque, Iowa.

With Toyota struggling to deal with two high-profile recalls and new questions about brakes in the 2010 Prius, consumers are trying to understand just how serious the problems really are.

The two recalls, which are both related to unwanted acceleration, cover millions of vehicles and have dented Toyota's long-standing reputation for making high-quality cars and trucks.

The first recall involved gas pedals that could get stuck under floor mats. The second — which covers 2.3 million vehicles in the U.S. spread across eight different models — concerns gas pedals that could become stuck on their own and fail to return to the idle position. It was serious enough to prompt Toyota to suspend sales of affected new models.

On Thursday, the Transportation Department opened a separate investigation into the 2010 Prius after receiving 124 reports from consumers about the brakes failing in certain situations.

So, How Are Consumers Reacting?

Sylvia Marino has been watching closely as consumers process the deluge of Toyota recall news. She is the executive director of Edmunds.com, the car consumer Web site, where she runs its social-networking forums.

"I don't think people are screaming and locking their cars in the garage," Marino says, adding that many Toyota owners seem willing to give the company a chance to deal with the problems. "It's not panic, but it's definite concern."

Marino says the furor seemed to quiet down after Toyota announced on Monday that it had devised a fix for the sticky gas pedals, but things picked up again after Transportation Secretary Ray LaHood on Wednesday warned Toyota owners to stop driving the affected cars.

He quickly retracted the advice, but the damage was done.

"With the press on it, and in light of Transportation Secretary Ray LaHood's comments, it was just adding fuel to this burning that was already happening," Marino says. "It just doesn't help when we have misstatements that were made like [the one] yesterday."

How Big A Deal Is This, Really?

Cars and trucks are recalled all the time. For example, the list of recalls from the National Highway Traffic Safety Administration is 12 pages long for December alone.

But Toyota's gas pedal recall, which came only two months after a recall to deal with accelerator pedals that got stuck in floor mats, was particularly widespread.

"What was so big about Toyota was that it wasn't just one model," Marino says. "It reached across a number of models and almost all segments, from cars to trucks and SUVs. That's why this type of recall was really unprecedented."

"Anytime you are touching into gas pedals, unwanted acceleration, braking, or anything with air bags ... those are the big hot buttons," Marino says. "People feel these are standard features in cars that we should feel safe with."

So should Toyota owners be very worried?

Not necessarily. While 2.3 million vehicles are covered by the gas pedal recall, only a small percentage of them actually have the exact pedal that Toyota says is at issue.

"If you look at just the sheer volume of vehicles under the recall and the percentage that actually have that pedal assembly, it's very small," she says. "But if you were impacted by this, it's very big."

In addition, the problem does not appear to occur suddenly, but rather is caused by a deterioration of the pedal assembly over time. Marino says Toyota believes the speed of that deterioration is affected by environmental factors, such as temperature.

"It's a problem that comes on slowly and you really have to pay attention to the way the pedals feel," Marino says. "If you take your foot off the pedal and it feels sluggish in coming back to its regular position, then you have to bring it in to the dealership."

Where Does Each Problem Stand Now?

The floor mat recall started in November, and dealers have been doing repairs since then, but the official notifications of the recall are just beginning.

"It takes so long to get all of the owner information that those notices are just now going out to owners," Marino says. "There is always this lag."

There was also a simple, immediate fix — remove the driver's floor mat.

For the sticky gas pedals, replacement parts have been sent to dealers, and technicians are receiving training to make the repair. But it will be up to individual dealers to figure out the pace of those repairs.

Marino says they should be able to prioritize customers who report acceleration problems. Whether or not drivers have experienced any issues, her advice remains the same.

"If you get the recall notice or you know your car is under the recall, you want a certified technician at the dealership to clear your car," she says. "If you go to sell the vehicle later, you want to know in good faith that those issues were addressed."

The 2010 Prius, meanwhile, has not been recalled yet.

"That is under investigation and they are under the microscope with this," Marino says. "That's going to be a wait-and-see."

What Does This Mean For Toyota Long-Term?

For a company that has built its reputation on reliability and high quality, this spate of news has been deeply unsettling.

In the short term, it will be an expensive problem, but the longer-term effects remain unclear.

"For anyone who was in the car-buying market, a third to a half who were considering Toyota are going to other brands to make a purchase," Marino says. "The other half are sitting and waiting to see how this plays out before making a purchase decision."

Marino adds that Toyota owners seem willing to give the company the benefit of the doubt — for now.

"That tone will quickly change if anything in the congressional hearings or investigation comes out that this may not have been dealt with as quickly as those owners wanted to think it was," Marino says. "That is definitely still to play out."

Is anybody buying Toyotas that haven't been recalled?

Marino says maybe. "You actually have people saying, 'This could be good for me. I was looking to buy a Toyota and I'm going to use this to benefit my wallet.' "