Accessibility links
Scientists Keep Water Liquid Far Below Zero Degrees If there's one fact that everyone knows about the physical world, it's that water freezes at 32 degrees Fahrenheit, or zero degrees Celsius. But wait — scientists in Israel have shown that you can keep water liquid all the way to minus 40 degrees by pouring it on the right surface. 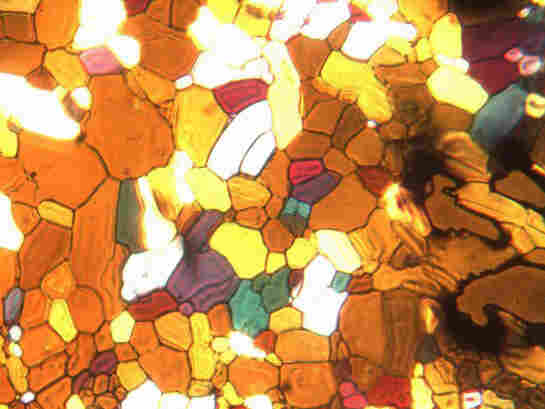 A thin (0.1 mm) layer of water that is frozen and examined under polarized light. Courtesy of Rainer Stahlberg and Gerald H. Pollack, University of Washington hide caption 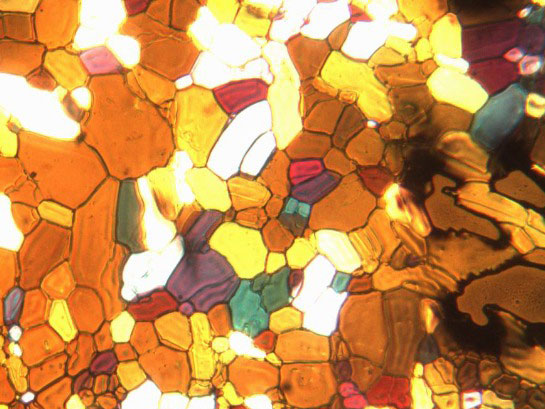 A thin (0.1 mm) layer of water that is frozen and examined under polarized light.

Despite what you may have heard, water doesn't always freeze at 32 degrees Fahrenheit. A team of scientists in Israel has come up with a way to control the temperature at which water will freeze.

A Matter Of Surface

Water, it turns out, is reluctant to freeze. Ice crystals prefer something to form on — a particle of dust will work, or a rough surface. The scientific team found that dust-free water on a smooth, clean surface will drop well below 32 Fahrenheit (zero Celsius) before it freezes. In this state, the water is called "supercooled." But once one crystal does form, the supercooled water will freeze rock-solid in an instant.

Igor Lubomirsky of Israel's Weizmann Institute of Science has been working with unusual materials called pyroelectric amorphous solids. These materials change their electrical charge depending on their temperature. Lubomirsky noticed that when he put water on these materials, the freezing point depended on the charge. Negative charge lowers the freezing point, positive charges raise it.

"Just the presence of electric charge by itself, on a surface that is not conductive, does something to water," he says.

'A Good Subject To Think About'

Lubomirsky says he doesn't know why changing charge alters the freezing properties of the water.

"But what we do know is we have a very, very, very good subject to think about," he says. His results appear in the latest edition of the journal Science.

Franz Geiger, a physical chemist at Northwestern University in Illinois, thinks Lubomirsky's work may be important for climate modeling. That's because ice crystals form on dust in the atmosphere — this is how clouds are made. Dust can have different electrical charges, and that could change the temperature at which clouds form — which in turn could affect global temperatures.